A Miracle of Saint Thomas of Maleon in Casablanca in 1991 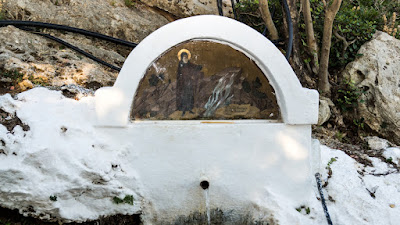 By Archimandrite Daniel Gouvalis
July 1991. A coach from Athens visited Velanidia (a village built on the southernmost edge of the Parnon mountain range). Fifty Christians wished to worship at the Church of Saint Thomas of Maleon and receive the sanctifying grace from its spring. Out of bad judgment, a large coach was used, while they should have taken a small one. How it managed to take the turns, as it approached the village, is inexplicable. It can only be explained as a miracle of Saint Thomas.

The devout pilgrims, after making a supplication to the Saint and after prostrating before his holy relic – some felt that it gave off a divine aroma – reverently drank from the holy water. Moreover they took some with them in bottles. One of these bottles of Saint Thomas's holy water traveled a long, long way. It reached Morocco, to the great city of Casablanca.

Among the pilgrims there was also a girl, a student of Dentistry, Panagiota Rashdi, who had converted to Christianity two years ago. As a Mohammedan she was called Amal. She was very impressed by the area of Velanidia, by the life of Saint Thomas and by the history of the spring of Saint Thomas. Leaving the holy spring she made sure to take with her some holy water in a small bottle. When she went on a summer vacation to her hometown, she took it with her. Thus the water of Maleon reached Morocco.

Ten days passed in Casablanca, when she went to visit Mahdi, her cousin, who was not well.

Six-year-old Mahdi went swimming in the sea with his family one afternoon. He drifted a little away from the others, was drawn in by the sea, and would have drowned had it not been for his rescue by a child who happened to be near and caught him. He escaped drowning but was greatly shocked by the danger he ran into. Physically and mentally he seemed changed. It wasn't long before he was bedridden with a high fever. His condition was very alarming. Everyone was saying: "The child is sick;" "Bad timing found him;" "At 6:00 when he was swimming he was struck by a demon. This is the time demons are at work."

The child's behavior was strange and inexplicable.

The doctors who examined him could not find what was wrong with him. A CT scan of the brain was also done but the tests showed nothing. Finally the doctors could not help. His people thought of asking for help from people of their religion. A Muslim exorcist-healer decided that the child has many demons inside him. And he suggested that another demon-possessed child should be brought there, and that the demons should begin to converse with each other, that it might be seen how many were in him. That happened too. Little Mahdi was beaten by the other one to get the demons out of him. Then they brought in another exorcist-healer, who beat the child mercilessly, claiming that with a lot of strikes the evil spirits would leave him. The result was that the child was full of wounds. The situation worsened.

It was then that Panagiota Rashdi visited him. As soon as she saw him, she was frightened by the wretched sight and began to pray mentally: "Lord Jesus Christ, have mercy on me." The little boy stretched out his hands, got a fierce look and burst into beautiful tears, then the girl immediately left the room. She was very upset about her little cousin's condition. 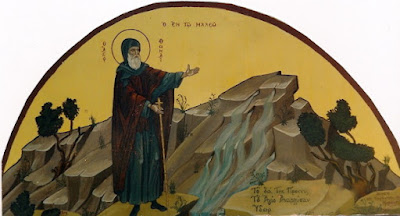 In the last days, from the blows of the exorcists, his throat had become inflamed and he could not eat or drink anything. In addition, as he was lying on the bed, pus began to flow from several places on his back and legs, where he was hit a lot. The doctors said that only a short time separates him from death. If he died of nothing else, he would die of starvation, because it had been twenty days since he put something in his mouth. DHis body was dried up. He had become "skin and bones".

Then Panagiota said to her mother: "Mother, just as we have good, holy people in our religion, so also in Greece. It doesn't matter that they are not of our own religion. However, they were right with God and loved him. One of these Saints brought forth holy water out of a mountain with a prayer. This water, if you have faith, works miracles. Whatever you want, it's done. Give Mahdi a few drops to drink."

Panagiota herself, because of the terror she got from the child's condition, never went back. But her mother decided to listen to her advice. The child was dying anyway. They would lose nothing to try the water from Greece.

They opened the child's mouth as much as possible. It was dry, because for twenty days he had not eaten or drunk anything. With some effort, two or three drops were poured in. They were shocked. The kid got a sudden boost of strength. His paralyzed muscles felt a strong vibration, a jolt. His throat opened. He stopped yelling and crying. An amazing change. As soon as food was brought to him, he began to eat it without any difficulty. It didn't take long for him to get completely well.

"A strange thing. What water is this! It is very good! As soon as a drop fell into the child's mouth, everything began to change. Mahdi was saved. And the various relatives of the child said: "'What waters Greece has! What waters!'"

Panagiota Rashdi today is called Panagiota Kotsopoulous, that is, she is married to a Greek man and lives in Pagrati, in Athens.

The conclusion is that the water of Saint Thomas, the ascetic in Maleon ten centuries ago, should not be treated like ordinary water, but like holy water. And as things show, many Christians hasten as pilgrims to the chapel of the Saint and to his holy spring.