René-Nicolas Ehni, Well-Known and Controversial French Author and Playright Who Converted to Greek Orthodoxy, Has Reposed 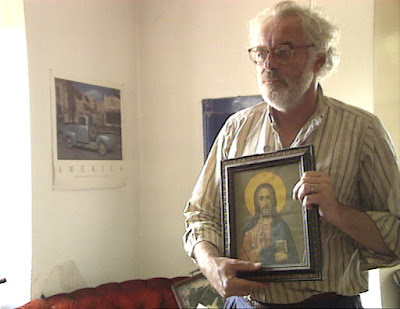 René-Nicolas Ehni was born on 29 April 1935, in Rixheim of the Alsace region of France, into a Jewish working class family. He lived as a child and teenager in Eschentzwiller, his schooling taking him to Colmar (in Saint-André) and Mulhouse (at the Lycée Lambert). The languages he spoke were Alsatian and he later learned French, German, and Greek.

His first vocation was to become an actor. He went to Paris, passed the entrance examination for the conservatory on rue Blanche in 1953, and started a small career acting in Paris theater before spending nearly three years in war in Algeria for his military service.

After two and a half years of war, he went into exile in Rome and met Laura Betti, Alberto Moravia, and Franco Zeffirelli, then returned to Paris and collaborated for the journal Modern Times, which aimed to make existentialism known through contemporary literature. Following his military service, Ehni furthermore frequented artistic circles, became the "pet" of a rich widow, and had a three-year love affair with choreographer Maurice Béjart after the latter had seen him dancing naked in the moonlight.

He has been known as a controversial social figure, critic, and writer for the past fifty years. His critical and incisive analyses of the 1970s and the Parisian intelligentsia earned him the label of provocative writer. Above all, he wanted to defend rural life, small people, and regionalism.

Ehni counted Simone de Beauvoir, who had highly praised his first novel La gloire du vaurien, as well as his dramatic plays, among his literary acquaintances and friends and although known as the enfant terrible through the 1960s and into the 1970s, Ehni subsequently disappeared from the public eye.

He published only two novels in the 1980s, after converting to Greek Orthodoxy in 1980 when he was baptized on Mount Athos, after which he married and had two children, despite facing tribulations in his youth as a homosexual. This is when he added the name Nicolas to his name. In 1991 he emigrated with his wife and their two children and settled in Plaka Apokorouno, Crete. He came to be called “Orthodox and Cretan”.

Since then, he had continued to fill notebooks with his fiery outbursts on politics, poetics, and spirituality just as he did as a young soldier fulfilling his military duty. In his autobiography Algérie roman he narrates his wartime experiences through a series of disconnected episodes from both civilian and military life which explain his reason for converting to Christianity.

In 1997, he played a character in the film Eat Your Soup (Mange ta soupe) by Mathieu Amalric .

In 1980, journalist and writer Tasos Michalas interviewed René-Nicolas Ehni for Greek television on the topic of Sarte's Existentialism and his own conversion to Orthodoxy, the transcript of which was published in the book on Mount Athos titled Άθως. Όρος Άγιο πολιτεία ανθρώπινη (Athos: Holy Mountain Human State). Below is a translation of that interview:

Tasos Michalas: What was it that made you seek and find the way to Orthodoxy? How did you get baptized Orthodox? What is the impetus of this change?

René-Nicolas Ehni: The road belongs to God. It was God. But we can identify a few points. I had gone to Patmos. But why did I go to Patmos? Because I went to Mount Athos. And why did I go to Mount Athos? I do not know exactly. On Mount Athos I met many monks. In fact, one, the hieromonk Symeon of the Monastery of Gregoriou, later became a close friend of mine. Why all this? Maybe because I happened to come to meet Greece twenty-five years ago. And why did all these experiences become so strong in me? Well, I do not know. They were such powerful experiences that I cannot explain them. I have met America, but this was something else. Orthodoxy is the real world. Orthodoxy is the meaning of the world. Inside the world I felt so empty. That is why in my works there is always an irony for the world. An irony that has an explanation and that is none other than that the world in my eyes seemed meaningless and purposeless.

Was this some influence from the world of ideas and philosophical conceptions of Jean-Paul Sartre?

Sartre's path calls itself the "path of freedom." But who does not know that freedom in the West is nothing more than doing what you like. Everything that suits you. That is why everyone closes themselves within their home, they are limited within themselves. They do what they want. Here, we have a symbolism, but with real implications.

Do you think that freedom in Orthodoxy is something different?

The fact that Sartre speaks of freedom is because he had previously stressed that there is no God and that he does not believe. What I do know is that the true sense of freedom is provided only in faith. In short: all this seems to me to be intellectual rubbish in relation to my body which is created in the image of God. Everything we are discussing at the moment, I see theoretically and intellectually if I compare it with the sense of freedom that remorse, silence and repentance give you before the mystery of the Divine Liturgy which is the hearth of phosphoric beauty.

Does the same happen to you as it does to many foreigners who in the Orthodox Liturgy find emotional satisfaction and nothing more?

Not at all. I have experienced many Liturgies in the past that had in them this emotion that you say. I used to work in Rome and I saw all the pomp of the Liturgy of the other Doctrines. I believe that the Orthodox Liturgy is something else. It is a true Liturgy that even if you still see it emotionally, it attracts you to the fullness of beauty and freedom. And this is done because the Orthodox Liturgy by its nature corresponds to and expresses the true Doctrine. The Doctrine of the Holy Trinity, that is, the Orthodox Doctrine. In this Liturgy within the Church, that is, there is a problem that is used by Sartre. It is the people. Only, with one basic difference, there is the following: the people of Jean-Paul Sartre are nothing but a mass, while the people of the Church are the people of God.

As far as I know, in your works and books you represent ideas that are completely related to Sartre's ideas. Is that not right?

My first book titled The Glory of the Scoundrel was very popular in France and was widely supported by Sartre's team and Simone de Beauvoir. But the same work is a failure of existential experience because the scoundrel in the end blows his brains out into the air with a bullet. In my work Eugenia Kopronymos I describe people who live without faith. The people who are finally trapped in their dead ends and in the deceptions of their false freedom. This play is theatrical, I wrote it in 1960 in Greece and it was published in 1970. It was played in France, Japan, Austria and Germany. There, I describe the Pope who forgot to even make his cross. A girl comes from a distant country, seeks and searches for faith, reaches the Pope and asks him to tell her how the sign of the cross is made, but he has forgotten. The Pope will say to the girl: "Wow! These are old things. They are small details of Christian humanism that have now been surpassed by our new existential humanism."

The Pope then dies and disintegrates like a worm. From there, exactly, the work got the name "Kopronymos". It is the society that lives in its dung. Eugenia Kopronymos is none other than the proud and drunken Western Civilization whose art constantly pours out this dung in which this culture is finally drowned and lost. It is a moral dung, but natural. In the play, then, everyone eventually dies and disappears, except for the little girl who takes the path to be in the "land of the people" as I call it.

The work was very popular. Simone de Beauvoir made extensive criticism, while Western intelligentsia thought that the "land of the people" was none other than Mao's China. I was not Orthodox then but when I wrote the work I had in mind the peoples of Orthodox countries who are not part of the masses.

How do you, as an Orthodox, view Sartre's ontological views and ideas today?

Quite simply, as ideas. You know I cannot analyze Sartre's ideas individually. Sartre is a part of many things. A part of a pile of rubbish that molds, foams and dissolves in the rubbish bin. Western journalistic terminology ranks me, and will probably rank me forever, among left-wing writers. Maybe even now that I became an Orthodox Christian. But to me all this is just ideas, mold, foam of a pile of rubbish falling apart. It is the world of oppression.

What are your future plans? How do you plan to work now that you are back in France?

I am not a theologian, but my experience of Orthodoxy is far beyond words, where there is one person: the person of man. The person of God. The image. All freedom is there. 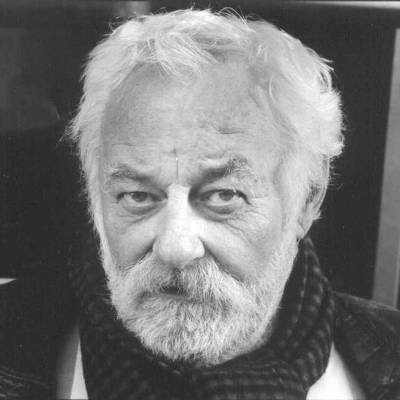 The link below goes to a documentary from 1992 titled Le mariage de Nicolas. It is a portrait of René-Nicolas Ehni in the form of a documentary film, on the occasion of his marriage in Plaka in Crete, where he had settled permanently. It features a powerful and festive ten-day event which is both a wedding of a cultural defector and a wedding in the purest Orthodox tradition, enhanced by the participation of the “sublime chanter” Kostas. It is a Cretan wedding in which all the people of the village participate, a wedding on a Greek island where the strength of the place and the memory of a lost world reigns. Finally, it is a wedding commented on by the groom himself, an inexhaustible storyteller.
Le mariage de Nicolas
John at 5:05:00 PM
Share
‹
›
Home
View web version