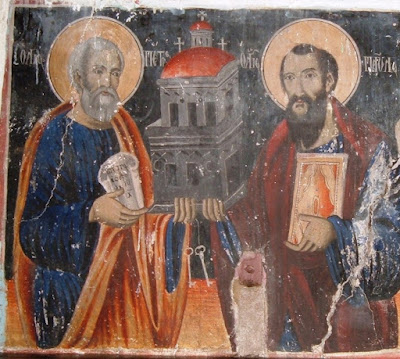 By Archpriest Rodion Putyatin
"Pray to God for us, holy and foremost apostles Peter and Paul, as we diligently resort to you, quick helpers and intercessors for our souls."

We all have a habit on our name day to mainly pray to the Saint whose name we bear: the one named with the name of the Apostle Peter prays to him, with the name of Saint Nicholas prays to Saint Nicholas. Why such a habit? Because this Saint, whose name we bear, is our special helper, our special intercessor. After all, the fathers give the name of a famous Saint precisely so that this Saint would especially help us, so that they would especially pray for us, so that they would be our guardian angel in life. That is why we call him our Angel, and his day is called the day of our Angel.

There is also, if not with all, then with many, another habit - the habit on the Saint's day to go mainly to their temple after which the temple is called. Why? This is because the Saint in the temple that is named after them is a special helper and intercessor; he mainly prays for those and helps those who pray to him in his temple, resort to him. Yes, the Saint in that temple, which is named after him, lives in his dwelling, invisibly present, acts in it with divine power and grace.

When we go to pray in some church, we sometimes say directly: I will go to Peter and Paul's, to Saint Nicholas', to George's. Where is it? In those temples that are named after these Saints.

Therefore, on your name day, pray mainly to the Saint whose name you bear, because they are your special helper and intercessor. And on the day of commemoration of the varius Saints, go mainly to those churches that are named after them, because there they will hear you more likely and help you.

Christian Listeners! Today is the day of the holy foremost apostles Peter and Paul, and the chapel in which you now stand is named after them. Consequently, they are now invisibly here, as in their home, they pray for us. And you prayed to them, you asked them. Believe and hope: they heard your prayers and will help you in what you asked them to do. Amen.
John at 1:43:00 PM
Share
‹
›
Home
View web version