Frank Atwood, Who Was Tonsured a Monk With the Name Ephraim, Has Been Executed 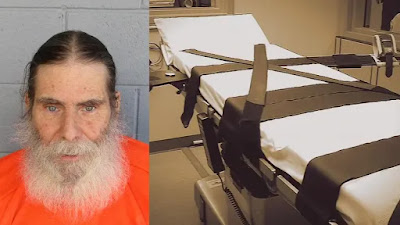 It was confirmed not long ago that Frank Atwood was executed this morning by the State of Arizona through lethal injection. Atwood was sedated at 10:10 a.m. and was pronounced dead at 10:16 a.m., media witnesses said. He was 66 years old, having been sentenced in 1987 for the kidnapping and murder of an 8-year-old girl in Pima County, Vicki Lynne Hoskinson. Frank maintained his innocence till the end.

“Today marks final justice for our daughter Vicki Lynne. Our family has waited 37 years, eight months and 22 days for this day to come,” Debbie Carlson, Vicki Lynne's mother, said while choking back tears during the media briefing following the execution. “Vicki was a vibrant little girl with an infectious laugh and a smile that would melt your heart."

After being strapped in a gurney and helping the doctor find the appropriate vein to insert the needle, and official walked into the execution room and read the warrant of execution, and asked Frank if he had a final statement. Frank Atwood's final statement is as follows, first addressing Elder Paisios from the nearby Saint Anthony's Monastery who accompanied him to his execution:

"I do. First, thank you, my precious Father, for shepherding me for over 20 years and leading me to the edge of Paradise. I want to thank my beautiful wife who has loved me with everything she has. I want to thank my friends and legal team, and, most of all, Jesus Christ, through this unfair judicial process that led to my salvation. I pray the Lord will have mercy on all of us and that the Lord will have mercy on me. Lord Jesus Christ have mercy on me! Panagia Theotoke soson me! [All Holy Mother of God save me].”
Approximately 40 people were present during Atwood’s execution — among them Carlson and Rachel Atwood, Frank Atwood’s wife.

According to media witness Bud Foster, Atwood's priest was in the execution room with him — a first for the state. He added that this execution was "probably the most peaceful" he has witnessed.

His spiritual adviser, Father Paisios, told the Arizona Board of Executive Clemency in May that he was certain Atwood had experienced a "complete transformation of life,” and such a conversion cannot be feigned.

Father Paisios said the authenticity of Atwood's faith was to a degree that he had not seen among hundreds of others who had come to him. He said Atwood “unfailingly followed my instructions" and kept to a daily routine of prayer.

Department of Corrections execution protocols allowed for a spiritual adviser or representative to speak with the prisoner in the death chamber from another room via microphone, but did not allow them to be in the same room as the prisoner.

In a legal complaint, Atwood's attorneys said the protocols violated his rights under the establishment and free exercise clauses of the First Amendment and the Religious Land Use and Institutionalized Persons Act.

In response, the Department of Corrections came to an agreement with Atwood and the district court issued a preliminary injunction specifying special accommodations for his religious exercise requests.

Atwood's attorney, Joseph Perkovich, said the department complied with the injunction, and allowed religious advisers to visit Atwood on Tuesday morning to perform a ceremony, known as a tonsure, involving cutting a lock of his hair and making Atwood a monk. Upon his tonsure he took the name of Ephraim, after the late hieromonk who established Saint Anthony's Monastery in Arizona.

The injunction provides for special accommodations during the execution as well. Atwood's spiritual adviser was allowed to accompany him to the execution chamber and lay his hands on him.

The injunction states: "ADCRR may require Plaintiff’s spiritual advisor to comply with all lawful directives of ADCRR personnel to: (a) touch Plaintiff only on the head; (b) stand in a location that gives the medical team an unobstructed view of the IV lines; (c) terminate touching Plaintiff during critical points in the execution process, such as during insertion of the IV line; and (d) immediately leave the lethal injection chamber upon ADCRR personnel determining that he has failed to comply with any of these requirements."

Atwood's spiritual adviser would also be able to pray audibly but may need to remain silent during "critical points" of the execution process, according to the injunction.
As the execution commenced, Father Paisios placed his stole with a crucifix on Monk Ephraim's head and prayed and crossed Frank as the lethal injection coursed through his veins. His repose was very peaceful and took place within minutes.
Atwood originally declined a last meal saying he was fasting, but when he was given a meal per protocol he accepted it. We are not told if he ate the meal or not.

The tray included a selection of salami, mustard, peanut butter, jelly, wheat bread, a snack bag of tortilla chips and 1 drink of water with a juice packet. 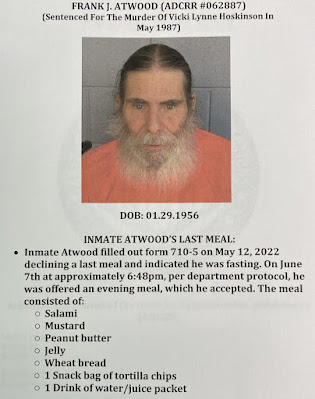