And the Two Shall Become One: The Frank J. Atwood & Rachel L. Atwood Story (About Frank Atwood's Autobiography) 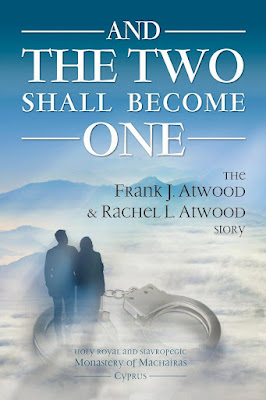 For those interested, Frank Atwood, who was executed today as a Great Schema Monk named Ephraim, wrote an autobiography at the recommendation of Metropolitan Athanasios of Limassol, who has known Frank since 1995. It took him and his wife Rachel, who was baptized with the name Sarah, ten years to write about their journey before and after they met each other. You can purchase the book here.

Frank Jarvis Atwood was born in the mid 1950's in an upscale neighborhood in Southern California, where he was raised in the Episcopal Church. He spent most of his junior high school years at the prestigious Brentwood Military Academy before tragically embarking on a regimen of drug involvement, countercultural activity and criminal enterprises. By his eighteenth birthday, Frank was in state prison; in fact, more than 9 of the next 11 years found Frank in various California prisons... where he continued illegal activity and became adept in Eastern religious studies. While constructing a multi-state drug ring in the summer of 1984, Frank was travelling from Los Angeles to Austin, Texas, and spent a weekend in Tucson, AZ. Just outside of Austin, Frank was arrested by the FBI for a kidnap and murder about which he knew nothing. Nevertheless Frank was convicted and sentenced to death; he remains on death row in Arizona. While on death row, Frank has remained extraordinarily busy. Upon his arrival he immediately engaged in a rigorous schedule of university courses (prior to this his educational experiences had ceased in 1975 when he obtained a high school diploma) and hoped to ultimately earn a law degree. For a decade, Frank attended university via correspondence courses, receiving an Associates of Arts degree from Central Arizona College in 1990; a second Associates of Arts degree from Ohio University in 1991; a Bachelors degree (majoring in English and minoring in Law) from Ohio University in 1995; and a Masters degree in Literature from Ohio University in 1998. Anthony completed a three year theology degree program at a major Orthodox Christian school and hopes to continue thereafter towards a Masters degree in theology. In addition to educational pursuits, Frank involved himself in editorial work and became an author. Anthony met his wife in 1987. Married in 1991, it was she who inspired his return to Christianity, a determination that included involvement in non-denominational Protestantism for a decade. This involvement however, left both with a sense of spiritual vacancy. Attempting to fill this interior void, Frank wrote to a Greek Orthodox bishop in Cyprus. Soon thereafter, Frank converted to Orthodox Christianity and was baptized with the name Anthony in 2000 by his spiritual father, Archimandrite Paisios, the Abbot of Saint Anthony's Greek Orthodox Monastery in Florence, AZ. Anthony's wife Rachel was baptized in the Orthodox Christian Church in 2007, taking the name Sarah.

A Few Words by the Authors

How do we reconcile the death sentence – specifically, a sentence of death that was pronounced on the 8th of May in 1987 – with our marriage, and more importantly, with eternal life? In order to answer this question, we need not only to look back, but especially, to look forward. Before we were joined in marriage, we were two people from two extremely divergent backgrounds. Frank, the only child born to affluent parents, had a childhood of privilege; Rachel, the only daughter of a couple who later divorced, had a childhood racked with difficulties. In spite of the difficulties, Rachel became “one of us” – a hard-working American with a kind and gentle heart and a rock-solid belief in God. Despite the privileges and the affluence, Frank’s “choices” – some that he made and some that had been foisted upon him – led him down the dark trail that ended, eventually, on Death Row in an Arizona prison. The stories of our lives are the stories of the two very different people, who, several years after the death sentence had been pronounced, were married on December 17, 1991. They are the stories of how Rachel become “one of us” and of how Frank’s “choices” led him so far astray. They are the stories of how we met and married; but they go further, for they are the stories that explain how each of us discovered Orthodoxy and came to be Eastern Orthodox Christians, and especially, of how the trajectory of our lives has so completely changed. Merely being Orthodox Christians can never be enough; we have learned to lead lives of prayer, repentance, and most of all, hope. With our hope firmly grounded in our risen Lord and Savior, Jesus Christ, we look forward to life in Him, because only in Him are all things possible. We must emphasize that we did not “become one” upon our marriage, but years later. Through our individual life experiences and through our shared experiences, we have learned, at last, what is meant by “And The Two Shall Become One”. At the request of clergy near and dear to us, we offer these, first, our individual and then, our shared experiences to the scrutiny and prayers of all who read them. And we pray, always for the salvation of all. 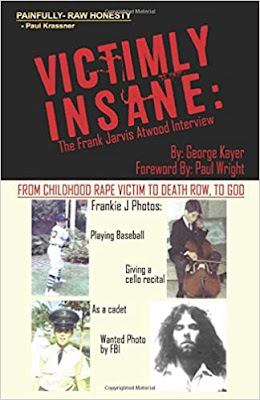 Victimly Insane: The Frank Jarvis Atwood Interview chronicles Frank Atwood's life path from childhood rape victim to Death Row. In this book length interview from Death Row, Frank Atwood reveals what the public and jurors have never heard about and what the lynch mob media never wanted you to read: how this sweet, rosey cheeked, silver spoon teen who went by Frankie J, arrived at perversity: at the crossroads of victim and victimizer. And innocent of the crime that placed him on Arizona's Death Row. After each horrendous crime people always look to their God and ask why? Find some of those answers right here in VICTIMLY INSANE. Order here.
John at 2:56:00 PM
Share
‹
›
Home
View web version