When It Snowed in the Summer! A Miraculous Event from the Life of Saint Anthimos Arethiotis 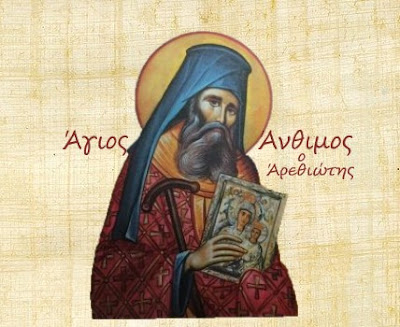 By Spyros Symeon
It was the summer in the 19th century and the monastery in Retha, northwest of Aetolia-Acarnania, was surrounded by a Turkish army in order to burn it, maybe in retaliation, maybe to scare the Greeks, maybe ... for something that history did not preserve since it was overshadowed by the ridiculousness that took place in the area.

The Turkish army surrounded the Monastery of Panagia Arethiotissa, or as it is known as Lady of the Valtos since the whole area belongs to the province of Valtos.

Officials entered the monastery where they found the abbot Elder Anthimos, originally from Ithaca.

They informed him that they have an order to burn the monastery. Perhaps their entrance to the monastery also hid the belief that there was a hidden treasure that the abbot would use in order to be saved.

The abbot Saint Anthimos welcomed them, to their surprise, to the monastery and asked to provide them with the rules of hospitality, reminding us a lot of Saint Longinus when Roman soldiers were looking for him in order to arrest him.

The officials were enticed and Saint Anthimos slowly gained their trust. But the time passed and the night arrived with the result that the Turks camped there and early in the morning they would carry out their plans.

Saint Anthimos, turning to one of them, asked him: "What would you do if tomorrow morning while you woke up you found half a meter of snow?"

He and those around him mocked him a little, encouraging him since it is impossible to snow in the area in summer.

But, we know that the impossible for people, for God is not only possible and achievable but can also be done as natural.

And so it happened.

Early in the morning, at dawn, the officials saw what their soldiers had noticed at night, but they did not know what had happened inside the monastery.

Snow,there was snow all around in the summer. Snow over half a meter and it continued to snow.

They were scared, they were terrified but also in awe. They did not know what to do but something led them to leave as soon as possible.

Maybe they were afraid that the abbot of the monastery had something out of this world to him, but maybe they also considered him a magician.

But the Saint had information from God Himself, He who abolishes the human laws of nature since nature is His creation.

Indeed inside hid a treasure, a treasure different from that which many people seek.

It hid great faith but also the Panagia who covers them all as long as they warmly invoke her.

Saint Anthimos the Arethiotis is not very well known. He reposed in 1870 and since then there are many testimonies that refer to his miracles but also divine interventions.

A few years ago, his second translation of his relics took place, during which the All-Merciful God sealed the holiness of Saint Anthimos with miraculous events, which we will mention at another time.

You who invoke the Lady of the Valtos but also are a divine champion, son of Ithaca, boast of Aetolia-Acarnania, mediator on behalf of the people of Arethioti, intercessor for those who praise you and chant your name warmly.