The Translation of the Sacred Relics of Saint Mary Magdalene from Ephesus to Constantinople in 890 A.D. 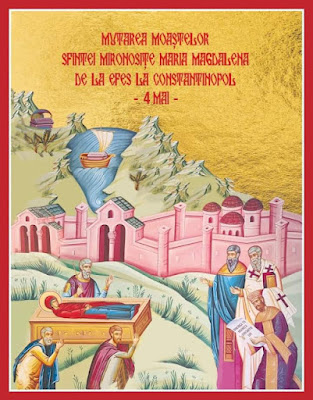 According to ecclesiastical tradition, towards the end of her life, Saint Mary Magdalene went to Ephesus, where the Apostle John the Theologian lived. There she became his helper and supporter in his trials and tribulations, in his imprisonment and in all his afflictions. In Ephesus, the Saint led many to the faith and awareness of the truth. The people of Ephesus honored and revered her.

After her death, her revered body was buried by the Holy Apostle and Evangelist John, in a cave near Ephesus, as a precious treasure. During the burial, many miracles were performed, as well as in later times, until today, the Saint does not stop performing miracles.

In the year 890, Emperor Leo VI the Wise (886-912) had her sacred relic recovered and translated it from Ephesus to Constantinople. Together with his brother Alexander, he took it on his shoulders and reverently laid it in the church that he built in the name of the Holy and Four-Day-Dead Friend of Christ Lazarus in Constantinople. The sacred relic was placed on the left side of the Holy Bema, in a silver case.

Our Church celebrates the memory of the Holy Myrrhbearer and Equal to the Apostles Mary Magdalene on July 22. She also is celebrated with the other Myrrhbearing Women on the Third Sunday after Easter, the Sunday of the Myrrhbearers. The translation of her remains is celebrated on May 4.
John at 2:27:00 PM
Share
‹
›
Home
View web version