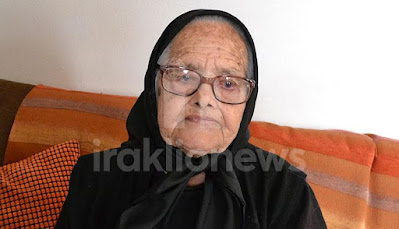 Maria Loulaki Kokovaki will be celebrating in heaven the first feast of her "brother by suckling", Saint Eumenios Saridakis, who was just recently canonized a saint by the Ecumenical Patriarchate and whose feast is celebrated on May 23rd. She reposed on May 20th at the age of 91, and her funeral took place today, May 21st, in Ethia, Crete.

In Greece, when infants are suckled by the same woman, they become "siblings by suckling" by virtue of sharing the same breast to feed and be nourished. They were born two days apart, and Saint Eumenios had to breastfeed from the nipple of her mother, though as a sign of his holiness, he refused to suckle as an infant on Wednesday and Friday, which are fasting days.

A few days after the canonization of her "brother by suckling", she was interviewed on April 19th by IraklioNews.gr about growing up with Saint Eumenios:

"From the time he was born, he was a child for sainthood," Maria said tearfully and with emotion about Saint Eumenios, whose birth name was Konstantinos Saridakis.

"He was born on January 1, 1931 and I was born two days later, on January 3. Ten children were born that year in Ethia, five boys and five girls. Now I am left alone, everyone is gone," she said, remembering in detail every aspect of their difficult life.

"His father died when Konstantinos was a baby and his mother worked from dawn to dusk to raise her five children. His older sister, Eugenia, brought him to my mother to breastfeed him. Sometimes I drank, other times he would, and glory to God, with a little milk we were both raised. Only he, as my mother had told me, would not latch on to the nipple to breastfeed on Wednesday and Friday. She was impressed, but as the years passed she understood."
For Maria, little Konstantinos was a brother and so they kept their relationship until the time came for them to feed on solid food.

"He grew up in poverty and hardship, went to school until the third grade and put on shoes after the age of twelve," she says, recalling that from a young age he stood out for his meekness, kindness and faith in God. "We had our minds on playing games, but his was on the Church. We forced him to play but he would disappear. He would go to the Panagia, light the lamps and chant according to the hours."

The whole village learned then on one winter night sitting by the fireplace with his family, when a flash descended on his head and he immediately announced to his siblings and mother that he would become a monk. For this reason, no one was surprised when one day, at the age of 15-16, he left for the Monastery of Saint Niketas, in Southern Crete, to dedicate himself to God.

There he took the name Sophronios and later, after his leprosy, healing and the decision to serve people who carry the cross of a serious illness, he was ordained a priest named Eumenios.

He remained a humble servant of God and people in the Church of the Holy Unmercenary Physicians Kosmas and Damianos at the Infectious Diseases Hospital in Agia Varvara, Athens and often received visits from his relatives and villagers, who respected him and asked for his blessing, but also believers from all over the country who had learned of his holiness, his thousands of miracles and his tireless offering to his fellow man.
John at 11:41:00 AM
Share
‹
›
Home
View web version