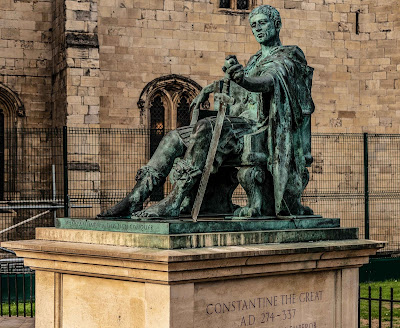 (Delivered on May 21, 1973
in the Church of Saints Constantine and Helen in Amyntaio)
Our Holy Church celebrates and keeps festival today in commemoration of Saint Constantine and his mother Saint Helen.

Constantine the Great was one of the greatest men. And just as all the greats divide critics, so too does he have opposition. Some are in favor of him, but there are others who are against him.

Of those who admire him, some admire him for his physical gifts, that he was tall, handsome and strong. Others admire him for his intellectual qualifications, that he was a genius. The two poles of his genius revolved around how he planned things and how he executed his plans. He was excellent at conceiving ideas and rapidly executing his plans. Others, again, consider them to be the contributor of great cultural work. For he built churches, homes for the elderly, hospitals, schools and academies; he built bridges, he opened roads. Above all, he protected agriculture; he exempted farmers from taxes. He eradicated magic and magicians. He protected the widows and the orphans. He generally did everything for the promotion of true civilization. Finally, being the genius that he was, he discerned that the West was perishing. He realized that his position was not safe in the West, so he transferred it to the East, to the Bosphorus. It was here that he built Constantinople, the dream of our race.

However, if historians admire Constantine the Great for all these things, we admire him for something else that is higher. The highest, which unfortunately is not acknowledged, was that he was a Christian. He was the first Christian king and emperor. Here, however, the tongues of the specialists object:

"Constantine a Saint and a Christian? The one who committed so many sins and so many crimes?"

We do not deny, my beloved, that Saint Constantine committed crimes. But how did he commit them? People constantly make mistakes in their life, and these mistakes often take place in marriage. How many women mourn and lament that they were unlucky in the marriage they entered? How many men consider themselves unfortunate in regards to the marriage they entered? Saint Constantine made the same mistake. He took a wife named Fausta, who was most beautiful, but behind her beauty hid the devil.

A thousand times blessed is an ugly woman with an angel inside her, and a thousand times cursed is a woman who may be beautiful but within her she has a devil. How many crimes and how many tragedies have come from diabolical beauty!

Constantine the Great had the misfortune of marrying Fausta. Fausta was wicked and jealous. What happened? Saint Constantine had a son from another wife, whose name was Crispus, and he was wonderful, brave, young, handsome and brilliant. Crispus therefore became the object of the jealousy of Faustus, who was his stepmother. Those unfortunate children who have had stepmothers know what they go through - with some exceptions. This is why when someone becomes a widow and has children he should avoid a second marriage. Children are unhappy. Rare, very rare is the exception, where out of a thousand stepmothers one will be found who loves the children as much as the first wife.

Fausta was one of the wicked stepmothers. She hated Crispus, and she brought accusations against him before Constantine, that Crispus was planning a revolution to overthrow his father and become an emperor. This was a lie, a slander, a false accusation. Constantine believed it. For this reason he ordered that Crispus, his beloved son, be killed!

But when Saint Helen, the grandmother of Crispus, after two months, arrived at the palace and learned the crime of the death of her grandson, she cried a lot. And she proved to her son, Constantine, that it was a terrible slander. Then the honorable Constantine got angry. He withdrew the sword and murdered Fausta.

Here are two crimes. The one, that he gave an order to kill his son, Crispus; and the other, that he murdered his wife. A family tragedy.

These were his crimes. How do we respond? We do not deny this. No, we do not deny it at all. The life of man is a scale, on which all the acts of man are loaded. Man does both good and wicked things. Only one is perfect: "One is holy, one is Lord, Jesus Christ, to the glory of God the Father." He is the only one who can call out: "Who among you is convicting me of sin?" (Jn. 8:46). Constantine the Great sinned. But we must pay attention to something else. When did he commit his sins? This is the big question. Those who have a twisted view of history do not acknowledge this. He sinned when he was a pagan, not a Christian. I repeat, he sinned as a pagan, when the sun was his god and he worshiped it. After he saw the vision that said "With this conquer", and other things took place, slowly he began to be attracted to Christianity. Therefore, he committed these sins during the period of his idol worship, before baptism; and we must be aware of this.

He was baptized two weeks before he died. He felt that his strength was failing. He realized that he was leaving. He withdrew to a deserted place, called a spiritual father, wept for his sins like no one among us weep for our own sins, and chanted all night long the 50th Psalm, "Have mercy on Me God...". That's how he was baptized. He took the crown off of his head. He took off the purple, which was worn by the emperors. And he went through the last days of his life wearing the garment of baptism, the white dress that the Church gives to the newly illuminated. Thus, with the "Take pity on me O God" and the "Remember me O Lord when You come into Your kingdom" (Luke 18:13; 23:42), Constantine the Great breathed his last.

Who then dares to accuse him?

Let me ask you, was he the only man that has sinned? David, who committed two great crimes, is he not numbered among the saints? Did not Peter deny Christ, but "he went out and wept bitterly"? (Matt. 26:75). Was not Paul a persecutor of Christians, yet he became the foremost of the apostles? We can say the same about so many other saints!

My beloved, let us glorify God that he gave us the mystery of repentance. As I have said elsewhere: God will not judge us because we sinned, but will judge us because we did not repent. Only one does not repent - Satan. This is why the Fathers say, to sin is human, to remain in sin and in error is satanic.

This is why, my beloved, I conclude by saying this. Let us learn this great lesson, the lesson of repentance. Let us also repent from our hearts. Let us all imitate the example of Constantine the Great, young and old, scholars and illiterate, officers and soldiers, leaders and subjects. Let every soul repent and weep just as he did. And let us also shut our eyes to this vain world and say "Take pity on me O God" and the "Remember me O Lord when You come into Your kingdom".