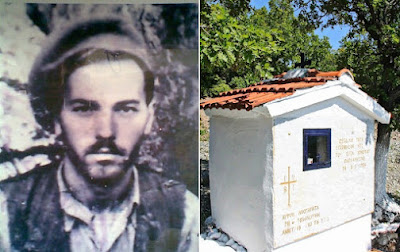 The following written testimony comes to us from the good shepherd Binos Traianos, as handed down to us from his grandson Andrew Binos. It is regarding a divine visitation in the middle of the 20th century to the good shepherd from the village of Garefi in the prefecture of Pella, which led to the construction of a chapel and a local annual celebration on Bright Friday.

Since then, every year on the feast of the Life-Giving Spring, at the spot of the first vision, on the mountain of Garefi at the fountain of Koupriva, a big festival takes place in honor of the Panagia, headed by the family of Binos Traianos and attended by crowds not only from the village, but from neighboring communities as well.

In the first dream I was on the mountain and a Bishop appeared, and he told me:

I answer him, and with his staff he carved a square shape down on the ground.

"Here you will build a church."

I woke up, told my wife about the dream and like every day I went down to feed the sheep and found a dead sheep in the herd. I took it, buried it and then I went and found my uncle the priest Miltiades Papachristos where I told him the dream I had, and then he told me:

"It is nothing, it is a dream, lives have been lost nearby."

In the second dream I was in the same place, then many men appeared tormented, unshaven and fasting. Suddenly out of the crowd came the same Bishop I saw in the first dream, I was startled, and he tells me:

"Do not be afraid, no one will bother you."

I noticed many empty pans next to the people, then I asked the Bishop:

"What are all these empty pans? Are they all hungry? Where will they find food?"

"You make the church I told you about and then all these pans will be filled and all this world will eat."

"I cannot make a church, Master, I have no money."

"Do not be afraid, it is a dream, do not think about it."

After a few days I was grazing the sheep, suddenly they started running and I was trying to catch them, when I managed to gather them up we had reached the border of Garefi and Agathi, I sat down to rest and I fell asleep.

Then I saw a third dream.

At the spot where I was the previous two times, the same Bishop appeared again, this time he was not wearing the vestments of a bishop but he had the form of an Angel and he told me:

"What will we do with you? Will I continue to look for you? I told you to make a church and you did not. I told you twice, two sheep died, and now I'm telling you for the third time. If you do not, on the third day of Pascha you will die."

I woke up scared, I went home and then to my uncle and told him the dream. Then my uncle said to me:

"I cannot tell you that it is a simple dream, you have to make a small church, we will all help and it will be done."

The chapel was built and my uncle the priest told me to find the nearest feast after Pascha so that the fast is over and the kourbania can be done. Zoodochos Pege (Life-Giving Spring), it is always on a Friday but it is not a fasting day. And so the consecration was made on 05/11/1956 by the Macedonian-fighter priest Miltiades Papachristos.

1956 was a difficult year, there was a great drought and the farmers could not cultivate their fields, they could not plow and sow. On May 11, 1956, after the consecration where in the afternoon the villagers returned from a chapel to their homes, it started to rain three days in a row, so that farmers can finally work their fields and get large crops. 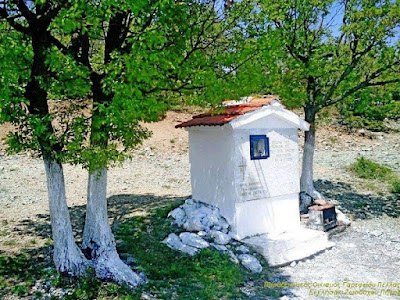 In 1926 there was a battle between Bulgarians and Serbs at the fountain. One morning the Bulgarians ambushed the Serbs and when the Serbs went to fill their water there was a big massacre. There were cemeteries near the track where the events took place. Years later, Serbian officers came and gathered up the remains of the 1926 massacre.
Source: Translated by John Sanidopoulos.
John at 4:18:00 PM
Share
‹
›
Home
View web version