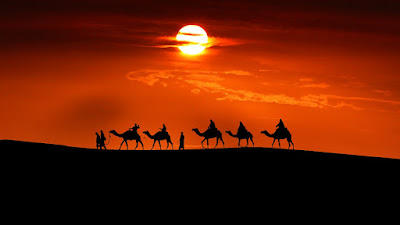 Long ago I discovered that if I came across a quote, even if someone's name is attached to that quote, you should never trust it unless you find the actual source and context of that quote.

This morning I came across such an example. I read a lovely quote in Greek about a kneeling camel as an image of a person in prayer, and the source for that quote was an Elder Gabriel of Mount Athos. I said to myself that I would like to translate this quote and share it, but I knew I needed to find the source. There are many Elder Gabriels from Mount Athos, so which is it and from where did this quote come from? Now if I didn't ask this question, I wouldn't have discovered the truth.

I therefore took a portion of the quote and put it in a Google search. It came up several times in Greek, but to my surprise none of them were attributed to an Elder Gabriel of Mount Athos, but instead they all said the quote came from Saint Ephraim the Syrian. However, there was still no source. Where did Saint Ephraim write this? No one who quoted this on their website bothered to look it up, so I realized I had to do it.

Since it was in modern Greek and the original quote would be in an older form of Greek, I thought it would be better to just see if someone already translated it into English, and search for key words that may bring it up. This is when I discovered the source. It turns out this quote is not a quote from Saint Ephraim the Syrian either. In fact, no Saint wrote it or said it. The author of the quote was in fact a woman named Anna Temple Whitney, who in 1920 published a book of poems titled "The Kneeling Camel and Other Poems".

How a shortened version of this poem ended up being translated into Greek and attributed to Elder Gabriel of Mount Athos and Saint Ephraim the Syrian is a mystery to me, but someone figured that the beautiful lesson and imagery of this poem was worthy of such figures, so I will post the original poem below and you can decide if it merits such attribution. But the lesson to be learned from this process is that like a camel, you must bear a burden to authenticate the sources of quotes before you share them.
The Kneeling Camel

By Anna Temple Whitney
THE CAMEL at the close of day
Kneels down upon the sandy plain
To have his burden lifted off
And rest again.

My soul, thou too shouldst to thy knees
When daylight draweth to a close,
And let thy Master lift thy load,
And grant repose.

Else how canst thou tomorrow meet,
With all tomorrow's work to do,
If thou thy burden all the night
Dost carry through?

The camel kneels at break of day
To have his guide replace his load,
Then rises up anew to take
The desert road.

So thou shouldst kneel at morning dawn
That God may give thy daily care,
Assured that no load too great
Will make thee bear.
John at 11:33:00 AM
Share
‹
›
Home
View web version