Homily on the Parable of the Sower (St. John of Kronstadt) 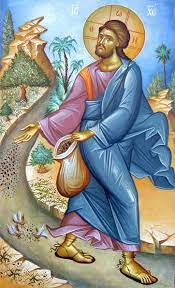 Homily on the Parable of the Sower

By St. John of Kronstadt
Today, beloved, the Gospel parable was read about the sower and the seed, about the unequal quality of the land upon which the seed fell, and about the varying fates of the seed. At the end of the Gospel reading the Lord Himself, at the request of His disciples, explained the parable (Luke 8:5-15).

Pitiful man! Poor man! How many obstacles he has in this most important matter, that of saving his soul! In that he himself treads upon the saving seed of the word of God, which can make him wise unto salvation, treading upon it either intentionally, consciously, and sneeringly, or out of frivolity, neglect, and ignorance; in that the universal malefactor and blighter of the human race, the devil, snatches away the saving word; in that his hardened and obdurate heart does not permit him to be saved; in that thorns – or the various cares, passions, and pleasures of life, along with riches – set before him insurmountable barriers to salvation. Only a few, who with honest and goods hearts and true reason value their salvation as they should, patiently making use of the means for salvation that have been given us, are saved. Many are called, but few are chosen. Astonishing! What is ultimately happening here? Who is to blame for this absurdity, for this voluntary perdition of men? Man himself is to blame, for treading upon – and often learning to tread upon daily – the wondrous, great, and countless gifts of God. The Lord God, Who created him in His image and likeness, in righteousness and holiness, granted him every opportunity, every means and strength, for life and piety. Man, in his laziness and ignorance, his negligence and obstinancy, his unreasonable predilection for the here and now, is like a shadow passing through life, rushing headlong towards perdition while pushing aside the saving hand of God. Who is to blame for this perdition, if not man himself? You will say: it is impossible, or at least difficult, to be saved! But, in fact, countless multitudes of men like you have been saved; they are even now being saved, though not many. “Being saved is difficult!” But do you really want to obtain eternal life – in blessed union with God, the Mother of God, the Angels, and all the Saints – without labor? Without the labor of self-purification, assisted by grace, without the labor of prayer and vigilance, without almsgiving, without meekness, without humility, without abstinence? In the acquisition of earthly goods we do not judge labor to be superfluous, and we often work at this with all our strength; but when it comes to obtaining eternal blessedness, we throw up our hands. It is not as though the matter of salvation were extremely difficult: “For My yoke is easy, and My burden is light,” says the Saviour (Matthew 11:30). Yes, with God’s help it gradually becomes easy, though at first it is hampered by the persistent warfare with sin. But is not sin itself a matter of extreme difficulty, since it is unnatural and alien to our divine nature? Is sin not torturous? If we labor in sin, how then can we not labor in righteousness, in saving our soul from sin? There, the end is death; but here, eternal life. “For the wages of sin is death; but the gift of God is eternal life” (Romans 6:23).

The present parable of the sower and the seeds was given not only to encourage listeners with honest and goods hearts to fulfill the word of God more zealously or unto greater perfection in virtue, but also so that people who are dissolute, neglectful, hard-hearted, and filled with passions might be prompted to take heed, listen attentively to the word of God, and work out their salvation with fear. The grace of God can change any heart for the better, accomplishing the miracle of salvation in any man, if only he would believe, desire to be saved, seek salvation, and admit the abyss of his sins, as well as the abyss that his sins have created between wanton sinners and God; if only he would submit himself to God’s saving grace and not push aside the saving hand of God. There were, and are, thousands of examples of men being saved who were previously dissolute, frivolous, hard-hearted, and subject to all manner of passion. They heeded the word of God, did not resist it, followed it – and they were saved, and are now in the blessedness of the Heavenly Kingdom. Nothing is impossible for God: He can save an inveterate sinner; He can raise him from the pit of hell to the height of His Kingdom and eternal blessedness – like the wise thief, like Mary of Egypt, who was drowning in the abyss of sin. Man himself must simply desire, ask for, and earnestly seek salvation; for the Lord does not desire to draw us unto salvation forcibly, so that salvation, like something forced upon us, would not become repellent to him: for we hold dear and pleasing to us only that which we ourselves have come to love and to which we have grown akin, which has become our treasure and, as it were, our nature. And such precisely is Christian virtue, such is the Kingdom of God: one must come to know it, to love it with one’s whole heart, to assimilate it here on earth, to root it in one’s heart in such a way that it wholly penetrates one’s entire soul, leaving no place in the heart for pernicious and insidious sin.

Christian! Cast aside your perilous dissipation, your unbelief, negligence, and sloth, your laziness for salvation; do not trample upon the wondrous gifts of grace; earnestly read or listen to the word of God, which opens unto you the path to salvation; accomplish it with the utmost understanding and strength; conquer your hard-heartedness and obdurateness; soften your heart like wax with the flame of the grace of the Holy Spirit and with tears of repentance; cast from your heart the thorns of sin, even though this be grievous and painful, for they have become second nature to you. You cannot, you say; but God’s grace is omnipotent: it will help you easily accomplish the whole work of your salvation.

Speaking of the seeds of the word of God that nourish the soul of man, I call to mind also that earthly, perishable seed: the seed of bread, the present bad harvest of bread crops, and the high cost of bread, its unprecedentedly high cost. The bad harvest came about from the destruction of wheat by insects and worms, or from drought. Where do these afflictions come from? From our sins. We did not offer the Lord God the fruits of our repentance and the correction of our wretched life; the Lord takes away our earthly goods, for which we did not know how to be, and were unwilling to be, thankful to Him; we did not want to do His will, and we became evil, crafty, proud, untruthful, unrestrained, idle-talking and foul-mouthed, avaricious, cruel, stingy, merciless, and unclean. Obviously, a rod of paternal justice hangs over us. God punishes us with crop failures, fires, floods, grueling wars, and destructive hardships and diseases. But do we come to our senses, do we repent, do we correct ourselves? Have we not become obdurate, have not our hearts turned wholly to stone? Deliver us, O God! Where then will the Kingdom of God be on earth, if not in Christians that call themselves Orthodox, in an Orthodox land, where there are so many precious Orthodox shrines dedicated to God, so many holy relics of God-pleasers, so many wonder-working icons, so many magnificent churches, in which there are such heavenly services on earth? “The Kingdom of God shall be taken from you, and given to a nation bringing forth the fruits thereof” (Matthew 21:43). Yes, may we not forever be put to shame; may the Lord correct us with the rod of punishment, and may He not deprive us of His mercy and His Kingdom. Amen.