Fr. Ioannis Aleiferis, a Holy Monk of Mount Sinai Known as a Fool for Christ, Has Reposed

By Ioannis Fourtounas
Fr. Ioannis Aleiferis (+ 10/19/2021), who after a brief illness departed for the heavenly dwelling place, was a Sinaite monk of the God-trodden Monastery of Saint Katherine.

Hailing from the region of Neapolis (Vatika) in Lakonia, Fr. Ioannis joined the monastic brotherhood of Mount Sinai and served as an ecclesiarch for many years.

He was found worthy of the rare gift of foolishness for Christ, which he preserved as the apple of his eye, appearing to people as a supposedly real fool in the world and not for Christ.

Simple, sloppy and always silent, he spoke only if asked, and this almost in one word, avoiding to participate in all kinds of discussions.

He was distinguished for his philanthropy, sharing what he could get his hands on, food or other things, while he distributed the entire financial compensation he received to his beloved poor Bedouins.

Once, when he had a serious skin disease and a pilgrim brought him a rare ointment from abroad, the next day he saw it in the hands of the janitor of the Monastery who was suffering from the same disease!

The Bedouins of the area believed that he was a saint, which is why they often asked him about their lives, and the blessed elder avoided answering so as not to show his charisma, but other times they insisted adamantly and he would give the solution or the information.

He had constant prayer, which is why he was seen walking in prayer, either talking to God or reciting the Psalter, which he knew by heart, while whenever someone approached him he altered his voice or said nonsense so that it would not appear that he was really praying.

The fathers once asked a hieromonk-pilgrim to remain for the feast of the Holy Cross, although there was no transportation in the following days and he accepted under pressure. However, being in agony during the vigil, Fr. Ioannis approached him and said to him, "Father, tomorrow is the Day of the Cross and at 2 o'clock in the afternoon you will leave!" And indeed, the car of the Monastery returned in an extraordinary way and then dropped him off in the capital of Egypt, Cairo, passing the gate of the Monastery at exactly 2pm!

Athonite fathers, but also other priestly ascetics with spiritual life happened to be surprised by the inner vision of the sloppy Fr. Ioannis and with wonder asked, "How do you have such a man among you", apparently seeing the divine light that surrounded him.

Let us thank, brethren, the all-good God, who blessed us to have with us Fr. Ioannis who had the charisma of foolishness for Christ, in an age of general hypocrisy, who was a mirror image of another world that exists beyond the typical moral boundaries.

After all, foolishness for Christ appears mainly in times and in areas of intense secularization and social hypocrisy to teach the essence of the faith expressed by the Gospel: "Take my yoke upon you and learn from me, for I am gentle and humble in heart, and you will find rest for your souls" (Matt. 11:29). 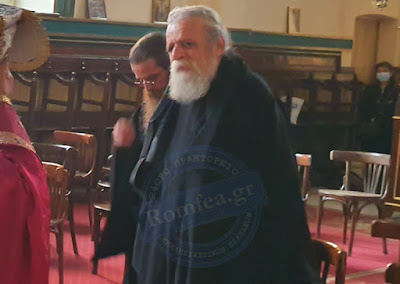 By Evangelos Theodorou
"What is the desert Father?"

"Dirt, granite, and heaven. That is the desert."

With these few words, Fr. Ioannis described the theology and experience of the Sinaitic desert as he lived it for a lifetime. Hailing from the mountains of Neapolis, Lakonia, which overlooks the wide blue sea, he sailed the Mediterranean immediately after his studies at the Rizareio Ecclesiastical School to the God-trodden Mount Sinai.

Silent and "distant", probably crazy for most, he served as an ecclesiarch and reader in the katholikon of Saint Katherine all his monastic life. Once they made him an oikonomos and for the first three days he ordered 2,000 eggs. When asked why, he said he found them at a good price! Before the end of the week, with the nickname "Johnny" now and with the mark of the madman, he returned to the service in the katholikon and never left.

Upright in his duties, he offered plenty of laughter to everyone with his incredible inspirations (which is a number), but it was impossible to always hide the gifts of the Spirit. We heard him dozens of times "reading" from outside and with incredible speed the canon of almost unknown saints as he was wandering around the temple. And if one ever went to the analogion to continue reading in a more "normal" way, he would approach and almost without looking at the Menaion, he would show his brother the point from where he had to continue.

If he understood that one was watching him with reverence, he immediately ruined every good thought to his face, just as we read about all the "fools for Christ" in the Synaxaria and Gerontika. Once, in July at 45 degrees Celsius, he was reading compline at his usual crazy speeds. The katholikon was full of Russian pilgrims up to the solea. Father Pamphilos, Dikaios at the time, made a signal for us to stand behind the right analogion and record it. I took out the digital recorder and started recording. He had stuck his face in the Horologion, so much so that he literally rested his nose on the book. When he realized what I was doing, he turned, stretched himself to the recorder which was half-hiding behind the stall, and asked us in everyone's hearing: "Did it rain today?"

He spent his monastic life outside the walls of the Monastery, right next to the main gate, where he came and went alone for endless hours. He only spoke when asked something, and that with two or three words. He did not get involved in discussions, he avoided any dangerous conversation, he never criticized anyone. His only interests were the weather (in Sinai only the temperature changes; clouds and rain are an endangered species) and the newspapers from Greece. He read each line, along with the ads. To spoil any thoughts about him, he would approach anyone and ask if the house he had read in an ad years ago had been sold.

Very rarely and as the years went by even rarer, he gave very specific advice in extremely few words, such as those to the young monk Fr. P. in the early 1990s. In the darkness of the katholikon, he approached and almost whispered various things, such as: "One hundred suspicions do not make a proof. Dostoevsky." At first everything seemed irrelevant, in the second reading you understood that they were completely targeted.

He departed suddenly yesterday, before he turned seventy, "like a little bird of the desert" full of spiritual days. His own "crazy" readings - with endings taken from the opera repertoire - at the analogion of Saint Katherine of Sinai, would be spiritually envied by many of us who learned the correct pronunciation of speech. Another invisible and tireless worker of the analogion will continue his ministry in the Church triumphant, together with Fr. Aaron, another Lacedaemonian who was a reader and practical chanter who reposed in the Sinaitic desert twenty days ago. May God rest their souls.
Source: Translated by John Sanidopoulos.
John at 5:26:00 PM
Share
‹
›
Home
View web version