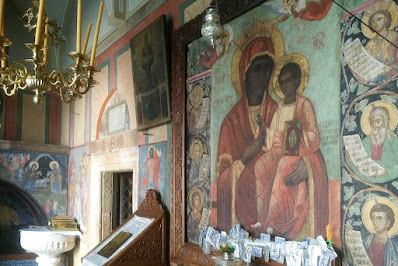 On the Greek island of Patmos there is the Monastery of the Life-Giving Spring which was founded in 1607.

In the katholikon of this Monastery is the fresco of the Panagia Eleousa, which was painted in 1763 by the Hierodeacon Athanasios from Crete, as evidenced by the existing signature.

The miracle happened in February (probably on the 25th) of the year 1955. During the Divine Liturgy at the moment of the consecration of the holy gifts, the whole church had knelt down and when the priest recited "Especially for our most holy, pure, blessed, and glorious Lady, the Theotokos and ever-virgin Mary," a cry was heard in the temple: "The Panagia is missing!" This cry came from the most pious ever-memorable Irene Oikonomou, who as soon as she got up from her "kneeling", saw, instead of the image of the Virgin Mary, a white wall.

The wall remained white for three days; there were only the Prophets framing the image. Awe, fear, anxiety prevailed on the Island for the cause of the disappearance of the Panagia. This was followed by all-night vigils and prayers for three days.

After the passage of these three days, the Icon of the Virgin Mary "returned", with the difference that a third eye appeared above the right eye, which is still visible today, obviously as a "sign" of proof of the miracle! 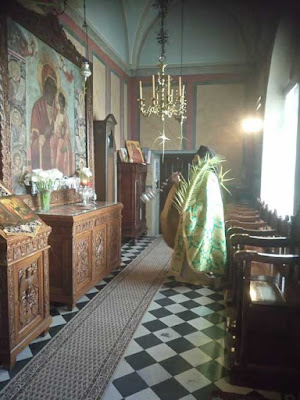 In those days a Greek in America was seriously ill with cancer. His name was George Marinos, originally from the Peloponnese. The doctors left him no hope of survival. Then a friend from Patmos who lived in America urged him to invoke the help of the Panagia Eleousa, whose fresco is in the Monastery of the Life-Giving Spring in Patmos.

Indeed, the dying man prayed with faith to the Panagia Eleousa and that night a lady in black appeared in the hospital room, who when asked "who are you and what do you want here", answered him: "I am the one you invoked and I came to make you well. You will go home tomorrow." That's what she told him and she left.

The next day, doctors, relatives and friends who were waiting for the "fatal news", could not believe what they saw with their own eyes.

Recovered, he went to his house, narrating this miraculous event of his healing and thanking the Panagia Eleousa of the Life-Giving Spring.

In fact, he did not offer only thanksgiving, but he wrote a letter to the abbess of the Monastery in which he described the miracle he experienced, thus justifying the absence of the Virgin Mary from her Monastery, and he deposited a sum of money in an American bank with the order that the interest be sent every year to the Life-Giving Spring on behalf of the nuns.

The Panagia will never cease to give health to those who invoke her Grace. 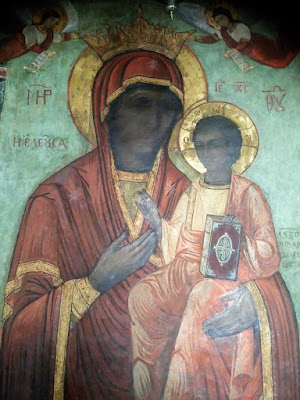