By Archimandrite Demetrios Kavvadias
In the year 1571 the Saint lived during the events of the invasion of the Ottoman fleet against Kefallonia during the month of July. This violent act of war was the forerunner of the naval battle of the Echinades (Curzolari) known as the "Naval Battle of Nafpaktos" or "Battle of Lepanto" that broke out on October 7th of the same year.

The sensitive heart of the Saint was eaten by pain as memories awoke in him of the fall of the Queen City (Constantinople), of the martyrdoms of his ancestors, of refugees, of misery. In those years Kefallonia was under Venetian rule which fought the Orthodox Church and caused division among the people with the class difference it imposed (inscription of the "nobles" in the libro d'oro). Thus, after prayer, Saint Gerasimos understood deep inside that he must help his land to face the crisis. And although he was deeply anti-Ottoman as well as anti-Latin, he realized that he had to take a similar stance. That is why he blessed the fleet of the "Holy League" that started from Sicily on September 16, 1571 and arrived in Kefallonia after ten days.

Sultan Selim II, son of Suleiman the Magnificent, had imposed his presence in the Mediterranean by occupying Cyprus, bloodied the Christian states and upsetting the West, continuing the flow of his father's blood. Nor could he realize that his invincible fleet, led by the mighty Kapudan Pasha Müezzinzade Ali Pasha, assisted by the Egyptian and Algerian fleets, was to be destroyed in the Echinades Islands at what the Venetians called the "Gulf of Nafpaktos". 35 of their 280 ships were saved, 30 of their 47,000 men were killed and 15,000 captured! The Christian fleet had 8,000 dead and lost 15 galleys. Many of the dead of the naval battle, most of them Greeks, were buried in the Roman Catholic Church of Santa Maria della Vittoria in Argostoli.

The student of the Saint, John Tsimaras, took part in the Naval Battle and informed the Saint about its beginning by leaving to fight. Then the Saint left the Monastery and climbed the mountain where he knelt with his hands raised to the sky, praying wholeheartedly for the auspicious outcome of the naval battle. He knew that if the Ottomans won, all of Europe would fall into their hands. Thus, the victory of the Christians was of the highest historical significance for the peoples of Europe. The exquisite vessel of the Paraclete, Saint Gerasimos, offered an extensive prayer. His eyes filled with tears and he left space and time. He was spiritually transferred to the throne of God stating his request and atoning with his pure soul for all the people. From this ecstasy he returned and lowered his hands only when the first warship returned announcing the victory of the Holy League.

This miraculous prayerful intervention of the Saint is confirmed by four of his surviving historical icons: in the Church of Saint Nicholas in Faraklaton (the Saint is kneeling in prayer), in the Monastery of Kipouraion (in the three-figure icon of the relics of Saint Spyridon, Saint Dionysios and Saint Gerasimos, where on the cover of his coffin he can be seen over the bay of the naval battle), in the Church of Saint Panteleimon in Samis (the Saint prays against the invasion of the Hagarenes) and in the Church of Panagia Loutriotissa in Sami (in the center of the multifaceted icon there dominates the Panagia holding Christ on the right and to the left is Saint Gerasimos on whom there is a ship with broken masts and a terrible storm. To the right of the Panagia is the Roman Catholic Saint Anthony of Padova and above him is an Archangel. This icon shows the cooperation between the Saints and the fleet.).

Regarding this miracle, we read in the application for the canonization of Saint Gerasimos in 1620: "It is certainly believed that despite all the Christians here, this island was preserved from captivity during the time of this battle of the Hagarenes, through the prayer of this father." Among the signatories was the student of Saint, John Tsimaras, as mentioned above, together with his father Marco-Antonio who were captains of a ship during the naval battle.

Saint Gerasimos, in conclusion, with his earthly presence further connected the people of Kefallonia with the broad race of Ottoman-occupied Romiosini and the other Orthodox. It also strengthened its relationship with the Ethnarchic Center, the Ecumenical Patriarchate, which throughout its long slavery became a Cyrene of the Nation, raising the cross of its Passion. 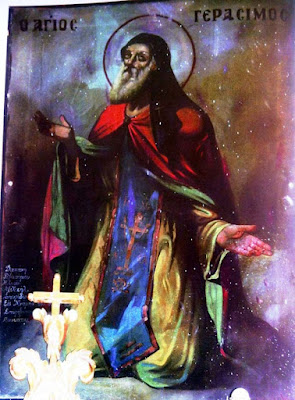 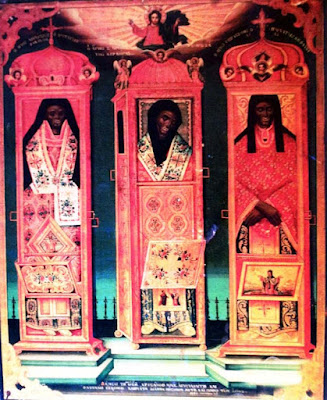 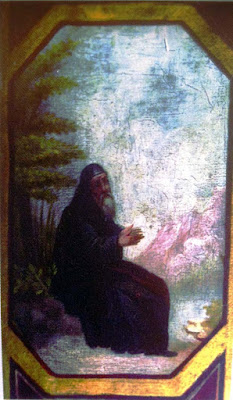 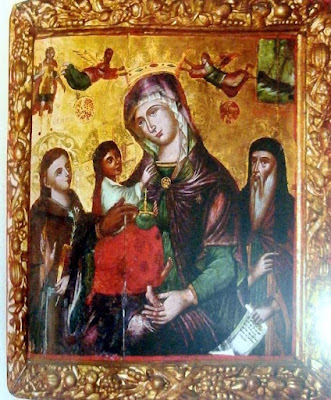