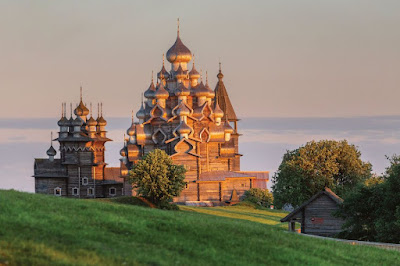 The Church of the Transfiguration, a visionary wooden wonder with an octagonal frame and 22 domes built in 1714 — legend has it without a single nail — has reopened to tourists for the first time in 40 years after an extensive, and at times contentious, restoration.

Located on an island in Lake Onega about 60km north-east of the city of Petrozavodsk, the capital of the Karelian republic, the Russian Orthodox church is part of an ensemble of storied wooden buildings known as Kizhi Pogost. A Unesco World Heritage Site since 1990, the complex also features the nine-domed Church of the Intercession and a bell tower.

The 37m-tall Church of the Transfiguration was built by craftsmen drawing on ancient and somewhat mysterious traditions of wooden construction. It was in dire condition for decades, and specialists and bureaucrats sometimes warred over restoration plans because of its unique architecture. The conservation process involved numerous commissions and consultations with international experts.

According to legend, the lead builder, known as Master Nestor, built the church with a single axe, which he threw into the lake after his masterpiece was completed. He said “there never had been and would never be another church like it again”, says Tatiana Nezvitskaya, the deputy director in charge of restoration at the Kizhi Museum, an open-air historical and cultural institution centred on wooden buildings on the island. “It is one of a kind because no other such construction has been recorded,” she says.

The church was largely built through the placement of horizontal logs with interlocking joinery. The Unesco World Heritage Centre, whose specialists visited Kizhi to advise on the restoration, says that three octagonal tiers in the church support bochkas: roofs with peaks shaped like cylinders, their upper surfaces extended into pointed ridges, and topped with 22 bulbous cupolas. Inside, under a central vault known as the “heaven”, shaped like a truncated pyramid, is a gilded wooden iconostasis holding more than 100 17th- and 18th-century icons.

Calculations by contemporary engineers and builders have not been able to fully explain how the structure holds together, because of its complexity and also the unpredictable nature of wood, “which behaves just like a person, completely differently in different situations”, Nezvitskaya says.

Preservation efforts in the 19th century introduced wrought-iron nails into the structure. Experts predicted in 1980 that more than half of the historic timber would have to be replaced. Among the proposals was restoring the church in sections after taking it apart and laying the pieces out on the ground, but that risked deforming the wood.

In 2008, Vladimir Putin, then Russia’s prime minister, signed a directive on the restoration of the island’s monuments and development of its infrastructure, providing 3bn rubles ($41.6m) in government funds overall. More than 500m rubles ($6.9m) was spent on the Church of the Transfiguration, the Russian news agency Tass reported.

Full-scale restoration began in 2011, using a previously installed metal carcass to hold up the central vault and allow for restoration without disassembly. Each of around 40,000 roof shingles was restored individually and, in some cases, replaced with ones created using traditional techniques. As a result, only 36% of the wooden structure was replaced.

The church is unheated and historically was used only for summer services. For now, those will be held just once a year, on the Feast of the Transfiguration on 6 August, which according to the Julian Calendar reckoning used by the Russian Church falls on 19 August.

The last parish priest of the church, Fr. Alexi Petoukhov, ignored Bolshevik orders to cease operating the church for several months until he was finally arrested and killed in 1937. On August 19, 2021 the first Divine Liturgy took place after 84 years. 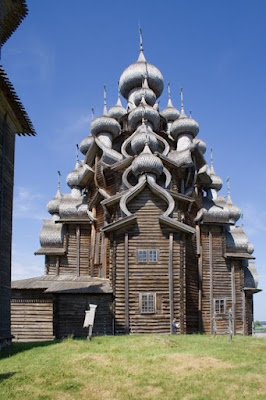 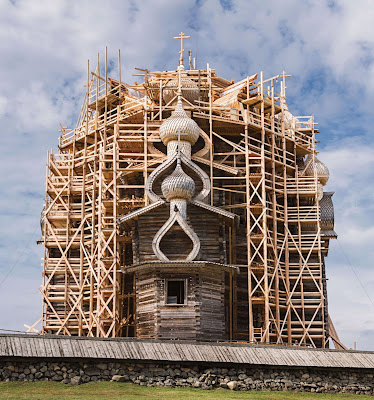 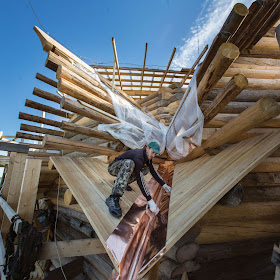 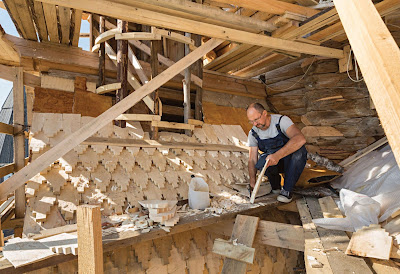 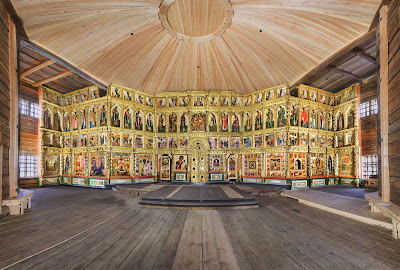