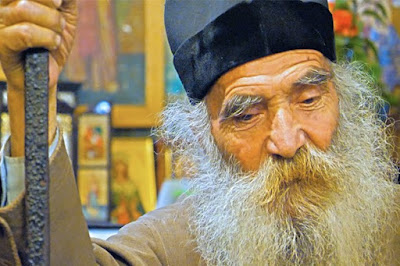 By Maria Giachnakis, Journalist
Extremist criminals from Samaria (Nablus) are setting fire to the Monastery of Jacob's Well to burn the only monk who has been protecting this holy shrine for many years, Elder Justin.

Elder Justin communicates with me very often even at night and when I hear his voice I always understand that he is in danger.

So now once again his voice on the phone could be heard from the pressure and the agony but also the effort he made to speak to me to say: “Please do something, they are throwing oil on me, setting fire to the monastery and they want to burn me too.”

He was stoned a few days ago and this is not the first time he has been sent to the hospital or been abducted. He still has the marks from the attacks on his head.

Every time something like this happens, I contact the authorities there but also the Ambassador of the Palestinian Authority in Athens, Mr. Marouane Toubasi, so that he can take action, as he always does so far, to send either police or the army to help the Elder.

But the problem is not solved this way because at some point he will be killed and he just will not be able to call me.

Unfortunately, no action has been taken at the diplomatic and foreign ministry levels because if it had been, now surely the Palestinian leadership, under the command of President Mahmoud Abbas, would have given orders to monasteries such as the Jacob's Well, Mount Sarandari, Saint Hierotheos, and the monasteries of Bethpage and Bethany would certainly have some protection. On the contrary, nuns and monks often fall victim to ridicule, robbery and risk being burned.

The silence of the authorities is a greater crime since this will lead to the abandonment of the Holy Land by the Greek Orthodox. What do they want, for them to abandon the Holy Places of Pilgrimage? Or do they want the monks and nuns to be killed who have given their lives for the Holy Land?

Our Greek Orthodox Patriarchate in Jerusalem, in cooperation with the Greek Ministry of Foreign Affairs and the Palestinian Leadership, must find a solution yesterday.

The Palestinians living in our country live like lords and enjoy quality education and a good life and positions and privileges, so why do they not protect the inalienable right to life for the Greek monks who are there in their own lands?
Source: Translated by John Sanidopoulos.
John at 12:42:00 PM
Share
‹
›
Home
View web version