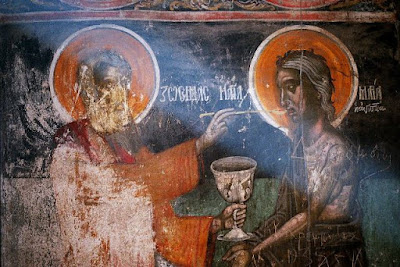 ...continued from part one.

According to her narration, in which later, after her death, she revealed to him that her name was Mary, she lived a prodigal life in Egypt from the time she was twelve years old, since from this young age, as she narrates, "I at first ruined my virginity and then unrestrainedly and insatiably gave myself up to sensuality." Living this life she did not make money, she simply satisfied her passion. She said to him: "It was not for the sake of gain - here I speak the pure truth", but she did her work for free, "doing free of charge what gave me pleasure." And she further revealed: "I had an insatiable desire and an irrepressible passion for lying in filth. This was life to me. Every kind of abuse of nature I regarded as life."

Because of her prodigal life and carnal desire, she followed the pilgrims who went to Jerusalem to venerate the Honorable Cross. And she did this not to venerate the Honorable Cross, but "to have more lovers who could satisfy my passion." It also describes realistically the way she boarded the boat. As she herself revealed about her journey, "There is no mentionable or unmentionable depravity of which I was not their teacher." And she herself expressed her wonder: "I am amazed, Abba, how the sea stood our licentiousness, how the earth did not open its jaws, and how it was that hell did not swallow me alive, when I had entangled in my net so many souls." During this journey she was not content with merely corrupting the young, but corrupting many others from the inhabitants of the city and foreigners. And in Jerusalem, where she went during the feast of the Honorable Cross, she wandered the streets "seducing young souls."

She felt, however, deep repentance from a certain miraculous event. When she entered the church to venerate the Wood of the Honorable Cross, some force prevented her from advancing. Then she stood in front of an icon of the Panagia, showed great repentance and asked for the guidance and help of the Panagia. With the help of the Theotokos, she entered the sacred church unhindered this time and venerated the Honorable Cross. Then, after thanking the Panagia, she heard a voice urging her to journey into the desert beyond the Jordan. She, after asking for the assistance and protection of the Panagia, took the road to the desert, having previously crossed the Holy Monastery of the Baptist on the Jordan River and communed of the immaculate Mysteries. She lived in the desert for forty-seven years, without ever meeting another human being.

In the desert for the first seventeen years she struggled very hard to defeat her thoughts and desires, essentially to defeat the devil who fought her with the memories of her previous life.

As she herself confessed, "seventeen years I passed in this desert fighting wild beasts - mad desires and passions." She had many desires for food, drink and "profligate songs" and many thoughts that sought to incline her towards fornication. However, when a thought came into her, she fell to the ground, wet it with her tears and did not get up from the ground "until a calm and sweet light descended and enlightened me and chased away the thoughts that possessed me." She constantly prayed to the Panagia, whom she had as the guarantor of her life of repentance. Her garment was torn and destroyed and she had remained naked ever since, she was burning from the heat and trembling from the frost and "frequently falling to the ground I lay without breath and without motion."

After a hard struggle, with the Grace of God and the constant protection of the Panagia, she was freed from the thoughts and desires, when the reasoning and passionate part of her soul was transformed, as well as her body was deified. She herself communicated this information to Abba Zosimas.

Due to the great spiritual condition in which Saint Mary arrived, she received from God the gift of clairvoyance and with this gift she knew both the name and the work of Abba Zosimas. She even knew the thoughts that existed within Abba Zosimas.

She was seen naked, but her body exceeded the needs of nature. She said herself: "For I am a woman and naked as you see with the uncovered shame of my body." Her body was nourished by the Grace of God: "I am fed and clothed by the all-powerful word of God, the Lord of all." In her case, as in other cases of saints, we observe that the energies of the body are suspended. This inhibition of bodily energies came from the fact that the soul accepted the energy of the Triune God and this divine energy also strengthened the body. "The Holy Spirit guards the substance of the soul unpolluted."

In their first meeting, Abba Zosimas saw Saint Mary in prayer. Saint Mary of Egypt had unceasing prayer and Abba Zosimas even saw her lift her eyes to heaven "and stretching out her hands, she began to pray in a whisper." And at one point, as he was sitting, "she was raised about a forearm's distance from the ground and stood praying in the air."

Saint Mary at this first meeting, after revealing her whole life, at the end asked Abba Zosimas to come next year, on Great Thursday, to a certain place near the Jordan River, near a residential area in order to commune her, after many years of great repentance, which transformed her existence. "I thirst for them with irrepressible love and longing," she told him.

Abba Zosimas returned to the Monastery without telling anyone what he encountered, which was in keeping with the rule of the Monastery anyway. However, he constantly begged God to find him worthy to see "the person he longed for" again, and in fact he was upset because time did not pass quickly enough, for he wanted all the time to pass as if it were just one day.

On Great Thursday he took with him in a small cup the Body and Blood of Christ, took some figs and dates and a little wet lentils and left the Monastery to meet Saint Mary. Because she was late in coming, he prayed to God with tears not to deprive him of the opportunity to see her again, because of his sins.

After fervent prayer he saw her coming from the other side of the Jordan River, make the sign of the Cross, step on the water of the river "and began walking across the surface towards him." Then the Saint asked him to say the Symbol of Faith and the "Our Father". She then kissed Abba Zosimas and communed of the Life-giving Mysteries. Then she raised her hands to heaven, sighed with tears and said: "Now let Your servant depart in peace, O Lord, according to Your word; for my eyes have seen Your salvation."

Then, after begging him to come next year to the torrent, where he had met her for the first time, she asked for his prayers. The Abba then touched "the Saint's feet and asked for her prayers for the Church, the empire and himself, and he let her depart with tears." She left in the same way as she came, that is, walking on the waters of the Jordan River.

The following year, at the request of the Saint, the Abba hurried to reach "that paradoxical spectacle". Having walked many days he finally arrived at the place, looking as a "skilled hunter" seeks his "sweetest prey", the Saint of God. Unable to find her, then he began to pray to God with contrition: "Show me, O Lord, Your pure treasure, which You have concealed in the desert. Show me, I pray, the angel in the flesh, of which the world is not worthy."

For Abba Zosimas the Saint was an inviolate treasure, an angel in the flesh, which the world was not worthy to have. And praying with these words he saw "the Saint lying dead, her hands were crossed according to custom and her face was turned to the East."

He also found her own writing which said: “Abba Zosimas, bury on this spot the body of humble Mary. Return to dust that which is dust and pray to the Lord for me, who departed in the month of Fermoutin of Egypt, called April by the Romans, on the first day, on the very night of our Lord's Passion, after having partaken of the Divine Mysteries."

She reposed on the same day she communed, having crossed a distance one day, which Abba Zosimas covered the next year in twenty days. Saint Sophronios writes: "The distance which Zosimas had taken twenty days to cover, Mary had evidently traversed in an hour and had at once surrendered her soul to God."  Her body had acquired other properties, it had been transformed.

Then Abba Zosimas, after he cried a lot he said psalms suitable for the occasion. And then, with great contrition, "washed the feet of the Saint with his tears and calling on her to pray for all, covered the body with earth."

The burial of the Saint took place with Abba Zosimas praying and with a lion by his side. After the burial "both departed - the lion went off into the depth of the desert like a lamb, while Zosimas returned to the Monastery glorifying and blessing Christ our Lord."

And Saint Sophronios, Patriarch of Jerusalem, says regarding this story, "as soon as I heard it, I wrote it down", adding, "putting truth above all else."

The life of Saint Mary of Egypt shows how a prostitute can be made God by Grace, how a human being can become an angel in the flesh, and how hope according to Christ can be replaced by the despair that comes from the devil. In the person of Mary of Egypt we see someone who seeks pleasure and chases people for her satisfaction, but by the Grace of God she becomes so sanctified that she reaches the point where Saints chase after her to receive her blessing and embrace her honorable body, to the point where even wild animals reverence her.

Saint Mary of Egypt with her repentance, her deep humility, her transcendence through Grace of her mortal and passionate body, on the one hand, offers consolation to all people, and humbles those who pride themselves in their ascetic accomplishments. She not only tamed the wild beasts that existed within her, but transcended all the boundaries of human nature and even tamed the wild beasts of creation.

This is the purpose and the wealth of the incarnation of Christ which is kept in the Church. With revelatory theology and life in Christ, man can be completely transformed.