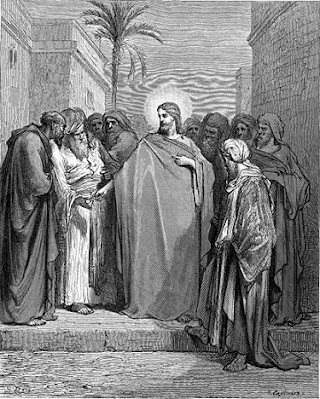 "Woe to you, Scribes and Pharisees, hypocrites!" (Matthew 23:13-39)
The Lord was always sweet and meek. To sinners He was full of mercy, compassion and forgiveness. Tonight, however, in the Gospel that we heard, He appears stern and caustic.

O my brethren! the Lord does not abhor the sinner. He came to save sinners. He turns away from the hypocrite and the two-faced. It was against this type that He thundered in the Gospel we heard, in the person of the Pharisees and Scribes of his day.

Who were the Scribes and Pharisees?

What were their characteristics?

They were people of form and appearance. They only looked at the externals. They lived a pretentious, external, fancy piety, while their hearts were full of hypocrisy and lawlessness. They gave a tenth of their "spices — mint, dill and cumin, but neglected the more important matters of the law — justice, mercy and faithfulness." They were "blind guides! who strain out a gnat but swallow a camel." They cleaned "the outside of the cup and dish, but inside they are full of greed and self-indulgence." They were like "whitewashed tombs, which look beautiful on the outside but on the inside are full of the bones of the dead and everything unclean." They were the so-called God-players, who act like men of God out of interest and expediency.

These were, in short, the Scribes and Pharisees, whom the Lord castigated.

Hypocrisy and pretense are very hated by God. That is, to make yourself pious and virtuous on the surface and in the heart to be different. Showing your mask instead of your face. To look like a man of God and to do it out of expediency, out of material interest, because that way he floats on the surface and does his job better.

The two-faced man is hated by God.

Outside he is sweet and kind, while at home he is a beast, a tyrant to his wife and children.

In front of you he pretends to be on your side, that he is your devoted friend. Behind you he digs a pit and insidiously undermines you.

These are dangerous people, who have one thing in their heart and another on their lips. Opportunistic schemers. In religious circles they pretend to be the God-fearing. To those who love monks, he also pretends to love monks. Exploiters of religion. They are those who hide their real inner world, to deceive the naive.

These are today's Pharisees, the merchants of religion, the exploiters, the people who seek their own interest and nothing else. The counterfeit types, who outwardly appear pious, but inwardly are foreign to God.

God wants us to be honest and straightforward. To appear as we truly are. Let two-faced hypocrisy and pretense be far from us. Straightforward and frank. Not sometimes secretive and sometimes open. No ostentatious outward reverence. Not in the eyes of people to appear righteous and clean, while being wicked at heart, unclean and filthy before God.

Hypocrisy is a crime.

If we make mistakes, but sincerely repent and consciously ask for God's mercy, we will be saved. Whereas if we pretend to be pious and holy, without being such in our hearts, we will be terribly disapproved of by the just God.

Be careful, then, brethren, for "God cannot be mocked."