Testimony of a Miracle at Sea by Saint Nicholas from 2006 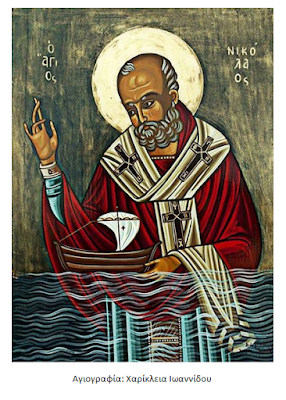 My name is Panagis M. and in 2006 I was an engineer at the RR ACACIA ferry. On December 20, we were loaded at the port of Barcelona (Spain) with SEAT cars bound for Egypt.

The weather was not bad but the news said it was deteriorating. The captain said it would not catch up with us and decided to leave.

But he made a big mistake, because at 1:30 in the morning we fell into a big storm (over 10 on the Beaufort scale), so much so that we had a cargo shift that had a slope of 38 degrees (at 45 degrees the ship overturns).

We broadcast SOS. Spanish helicopters soon arrived, dropping life jackets, but it was impossible to even stand on deck. Due to the big storm it was also impossible to drop the lifeboats.

Suddenly a relatively old man with a short beard appeared wearing a blue work uniform. I thought he had gotten off the helicopters.

"I came to help you with your handling of the engine room," he told me. 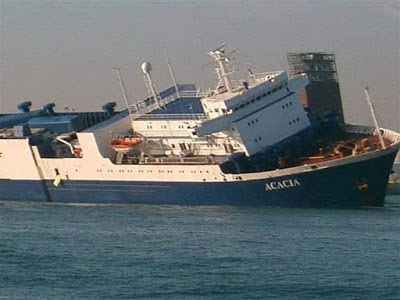 We went down to the engine room, to the center console and together for about six hours we made various movements so that the ship would not be battered and we overturn.

The morning was relatively calm and we were in the open at the port of Barcelona.

"Alright, now I'm going upstairs; I'm leaving and you will go on safely," he told me.

I continued alone and finally we managed to arrive at the port at 2:30 in the afternoon on December 21.

I climbed on deck and searched to find him. Nowhere.

I asked the other engineers where the master who was with me went.

"No one was with you, chief. We saw you all these hours talking to yourself and we were baffled." 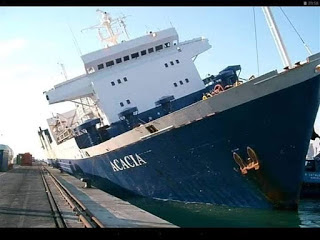 And yet Saint Nicholas was with me. How did I not understand? How can a man hallucinate for so many hours and in a daze make such moves and save the ship?
Since then I have stopped cursing (a bad habit that we Kefallonians have) and I praise Saint Nicholas for his help towards me and my colleagues.

When I go down to the naval cafes of Piraeus and I tell them what happened, they tell me, "We believe you Master-Panagi because you are telling us." Because they know I was not religious at all.

Glory be to the name of Saint Nicholas.

(The photos are taken from the internet showing ACACIA in the port, relatively unloaded with less of a slope.)
Source: Translated by John Sanidopoulos.
John at 12:34:00 PM
Share
‹
›
Home
View web version