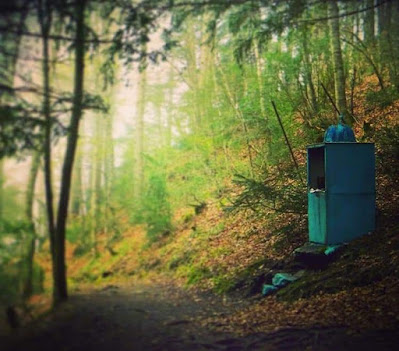 In 1971, on the Feast of the Exaltation of the Honorable Cross, which draws a large crowd from the region of Pieria to the old Monastery of Saint Dionysios, everyone was shocked by the disappearance of a little boy in the forest of Olympus. When, after days of searching, he was found calm and safe on a rock by men of the Police and the Army, he said that he was protected throughout these days by a monk. When he later saw the icon of Saint Dionysios, he recognized that he was the monk who protected him all those days in the forest of Olympus.

The child's name was Vasilios Trikalopoulos and he lives in Pieria.

The photo shows the small shrine dedicated to Saint Dionysios of Olympus at the place where the child was found and miraculously kept from harm.
John at 11:34:00 AM
Share
‹
›
Home
View web version