Sermon on the Circumcision of Christ (St. Cyril of Alexandria) 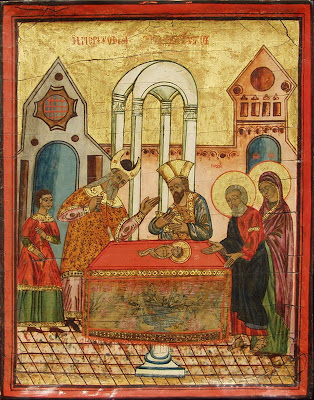 On the Circumcision of Christ
(Sermon 3: Luke 2:21-24)
By St. Cyril of Alexandria
Very numerous indeed is the assembly, and earnest the hearer, for we see the church full, but the teacher is but poor. He nevertheless Who gives to man a mouth and tongue, will further supply us with good ideas. For He somewhere says Himself, "Open thy mouth wide, and I will fill it." Since therefore you have all come together eagerly on the occasion of this joyous festival of our Lord, let us with cheerful torches brightly celebrate the feast, and apply ourselves to the consideration of what was divinely fulfilled, as it were, this day, gathering for ourselves from every quarter whatsoever may confirm us in faith and piety.

But recently we saw the Emmanuel lying as a babe in the manger, and wrapped in human fashion in swaddling bands, but extolled as God in hymns by the host of the holy angels. For they proclaimed to the shepherds His birth, God the Father having granted to the inhabitants of heaven as a special privilege to be the first to preach Him. And today too we have seen Him obedient to the laws of Moses, or rather we have seen Him Who as God is the Legislator, subject to His own decrees. And the reason of this the most wise Paul teaches us, saying, "When we were babes we were enslaved under the elements of the world; but when the fullness of time came, God sent forth His Son, born of a woman, born under the law, to redeem them that were under the law." Christ therefore ransomed from the curse of the law those who being subject to it, had been unable to keep its enactments. And in what way did He ransom them? By fulfilling it. And to put it in another way: in order that He might expiate the guilt of Adam's transgression, He showed Himself obedient and submissive in every respect to God the Father in our stead, for it is written, "That as through the disobedience of the One man, the many were made sinners, so also through the obedience of the One, the many shall be made righteous." He yielded therefore His neck to the law in company with us, because the plan of salvation so required: for it became Him to fulfill all righteousness. For having assumed the form of a slave, as being now enrolled by reason of His human nature among those subject to the yoke, He once even paid the half shekel to the collectors of the tribute, although by nature free, and as the Son not liable to pay the tax. When therefore they see Him keeping the law, be not offended, nor place the free-born among the slaves, but reflect rather upon the profoundness of the plan of salvation.

Upon the arrival, therefore, of the eighth day, on which it was customary for the circumcision in the flesh to be performed according to the enactment of the law, He receives His Name, even Jesus, which by interpretation signifies, the Salvation of the People. For so had God the Father willed that His Son should be named, when born in the flesh of a woman. For then especially was He made the salvation of the people, and not of one only, but of many, or rather of every nation, and of the whole world. He received His name, therefore, on the same occasion on which He was circumcised.

But come, and let us again search and see, what is the riddle, and to what mysteries the occurrence directs us. The blessed Paul has said, "Circumcision is nothing, and uncircumcision is nothing." To this it is probable that some may object: Did the God of all then command by the all-wise Moses a thing of no account to be observed, with a punishment decreed against those that transgressed it? Yes, I say, for as far as regards the nature of the thing, of that, I mean, which is done in the flesh, it is absolutely nothing, but it is pregnant with the graceful type of a mystery, or rather contains the hidden manifestation of the truth. For on the eighth day Christ arose from the dead, and gave us the spiritual circumcision. For He commanded the holy Apostles: "Go therefore, make disciples of all nations, baptizing them into the Name of the Father, and of the Son, and of the Holy Spirit." And we affirm that the spiritual circumcision takes place chiefly in the season of holy baptism, when also Christ makes us partakers of the Holy Spirit. And of this again, that Jesus of old, who was captain after Moses, was a type. For he first of all led the children of Israel across the Jordan, and then having halted them, immediately circumcised them with knives of stone. So when we have crossed the Jordan, Christ circumcises us with the power of the Holy Spirit, not purifying the flesh, but rather cutting off the defilement that is in our souls.

Again, when the Son was present among us, though by nature God and the Lord of all, He does not on that account despise our measure, but along with us is subject to the same law, although as God He was Himself the legislator. Like the Jews, He is circumcised when eight days old, to prove His descent from their stock, that they may not deny Him. For Christ was expected of the seed of David, and offered them the proof of His relationship. But if even when He was circumcised they said, "As for this man, we know not whence He is;" there would have been a show of reason in their denial, had He not been circumcised in the flesh, and kept the law.

But after His circumcision, the rite was done away by the introduction of that which had been signified by it, even baptism, for which reason we are no longer circumcised. For circumcision seems to me to have effected three ends: in the first place, it separated the posterity of Abraham by a sort of sign and seal, and distinguished them from all other nations. In the second, it prefigured in itself the grace and efficacy of Divine baptism; for as in old time he that was circumcised, was reckoned among the people of God by that seal, so also he that is baptized, having formed in himself Christ the seal, is enrolled into God's adopted family. And, thirdly, it is the symbol of the faithful when established in grace, who cut away and mortify the tumultuous risings of carnal pleasures and passions by the sharp surgery of faith, and by ascetic labours; not cutting the body, but purifying the heart, and being circumcised in the spirit, and not in the letter: whose praise, as the divine Paul testifies, needs not the sentence of any human tribunal, but depends upon the decree from above.

After His circumcision, she next waits for the time of her purification: and when the days were fulfilled, and the fortieth was the full time, God the Word, Who sitteth by the Father's side, is carried up to Jerusalem, and brought into the Father's presence in human nature like unto us, and by the shadow of the law is numbered among the firstborn. For even before the Incarnation the firstborn were holy, and consecrated to God, being sacrificed to Him according to the law. O! how great and wonderful is the plan of salvation! "O the depth of the riches both of the wisdom and knowledge of God!" He Who is in the bosom of the Father, the Son Who shares His throne, and is coeternal with Him: by Whom all things are divinely brought into existence, submitted nevertheless to the measure of human nature, and even offered a sacrifice to His own Father, although adored by all, and glorified with Him. And what did He offer? As the firstborn and a male a pair of turtles, or two young doves, according to what the law prescribed. But what does the turtle signify? And what too the other, the dove? Come, then, and let us examine this. The one, then, is the most noisy of the birds of the field, but the other is a mild and gentle creature. And such did the Savior of all become towards us, showing the most perfect gentleness, and like a turtle moreover soothing the world, and filling His own vineyard, even us who believe in Him, with the sweet sound of His voice. For it is written in the Song of Songs, "The voice of the turtle has been heard in our land." For Christ has spoken to us the divine message of the Gospel, which is for the salvation of the whole world.

Turtles, therefore, and doves were offered, when He presented Himself unto the Lord, and there might one see simultaneously meeting together the truth and the types. And Christ offered Himself for a savor of a sweet smell, that He might offer us by and in Himself unto God the Father, and so do away with His enmity towards us by reason of Adam's transgression, and bring to nought sin that had tyrannized over us all. For we are they who long ago were crying, "Look upon me, and pity me."
John at 12:46:00 PM
Share
‹
›
Home
View web version