Juxtaposing the Birth and Rebirth of Christ (St. Epiphanios of Salamis) 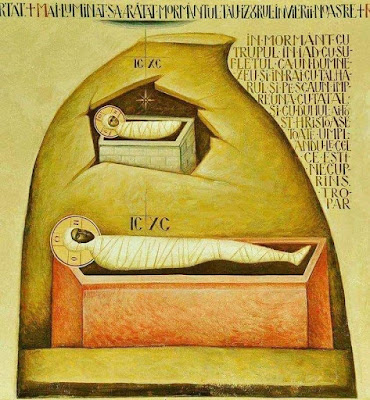 By St. Epiphanios of Salamis
Listen now to the circumstances of Christ's twofold birth and acclaim the wonders.

At night Christ is born in Bethlehem, and at night at Sion He is reborn.

When born He received myrrh, and at His burial He receives myrrh and aloes.

There Joseph was the name of Mary's non-husband husband, but here Joseph of Arimathea proved to be the burier of our Life.

In Bethlehem in a manger the former took place, and the latter in the tomb as in a manger.

At His first birth Christ after forty days entered the earthly Jerusalem, and the temple, and as the first-born He offered a pair of turtle-doves to God. But at His resurrection from the dead Christ after forty days ascended to the Jerusalem on high, from whence He departed not, and as the incorruptible First-born from the dead, in the true Holy of Holies He offered to God the Father our soul and body as two spotless turtle-doves; and, like Symeon the ancient, God the Father received Him uncircumscribably into His embrace, into His own bosom.

If, however, you hear these things as though they were fables and not with faith, the unbroken seals of the Master's tomb condemn you with respect to Christ's rebirth.

For just as Christ was born from the Virgin whilst the natural gates of the virginal nature remained closed at the opening of the womb, so also Christ's rebirth was wrought while the seals of the tomb were unbroken.

From "A Homily on the Burial of the Divine Body of Our Lord and Saviour Jesus Christ, on Joseph of Arimathaea, and on the Lord’s Descent Into Hades Which, After his Saving Passion, Wondrously ensued on the Holy and Great Saturday".
John at 3:35:00 PM
Share
‹
›
Home
View web version