Homily on the Theophany of the Lord (St. Luke of Simferopol) 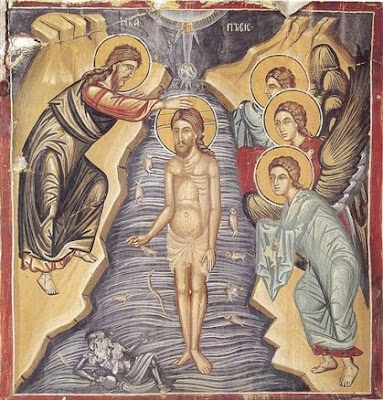 By St. Luke, Archbishop of Simferopol and Crimea
The Gospel reading for Theophany contains words of Christ that are of great importance. To this now I want to turn your attention for a bit.

This great event of the Lord's Theophany is preceded by a sermon on the banks of the Jordan River, by John, the Forerunner of the Lord, the greatest among men ever born by a woman. His fiery sermon of repentance, for which he had been preparing for twenty years, in the city of Judah drew to him a great many people. The fiery words of his sermon burned the hearts of the people he baptized in the waters of Jordan thus cleansing them of their sins.

On that great day, with great surprise, he observed that among the others who had come to be baptized was Him, who until then he had not known, but about whom he had revealed that He would baptize with the Holy Spirit. And when he fell at His feet, he said with awe: "I have need to be baptized by You, and yet You come to me?" (Mt. 3:14).

We, who are already baptized in the Holy Spirit and fire, would not be able to understand why the sinless Son of God went to His servant John and asked to be baptized by him with the baptism of repentance to be forgiven of his sins, which he did not have, if Christ himself did not tell us by answering the question of the Forerunner as follows: "Let it be so now: for it is fitting that we should fulfill all justice" (Mt. 3:15).

O, our Lord! We venerate You and Your Forerunner, and we thank You from the bottom of our hearts for the fact that You have taught us to respect and honor "all justice" and to hate any injustice, for it comes from the devil. Every justice, even the most insignificant just act, is blessed by God. You received the baptism from John in the Jordan River for the absolution of sins because You wanted to fulfill what God's plan provides. The immersion into the waters of Jordan was a seal of repentance for those who came to be baptized. Because in return for whole-hearted repentance, the one who accepted John's baptism received from God the forgiveness of their sins.

But his baptism did not renew people, and it was not for them a second birth, as it is in the great mystery of baptism, with the Holy Spirit, with which we Christians are baptized. The baptism of John was therefore just. But our Savior did not speak only of this justice with John, to reassure him and to solve his uncertainty, but of all justice, that is to say for God's plan. With his Divine words, he sanctified and blessed every truth, and consistently criticized any injustice.

Think, my beloved ones, people of my own spirit, society of the little flock of Christ, of how much injustice there is in the world! How great a sin war is, when the people, even the Christian people, exterminate one another! If the murder of only one man in many populations is punishable by death, then how will the Lord punish those who are to be charged with the murder of tens of millions of people? Any sin is an injustice, and war is the last injustice that we all have to hate.

There is great injustice in those nations where the land, which was given by God to all men, and especially to those who cultivate it, belongs not to the people and to the nation, but to those people who have power, which is given to them through money. And how much more injustice there is in relations between people, even between relatives and members of the same family. This injustice makes the devil very happy. This was not the way things were in the times of the apostles, among the first Christians. "Now the multitude of those who believed were of one heart and one soul; neither did anyone say that any of the things he possessed was his own, but they had all things in common. And with great power the apostles gave witness to the resurrection of the Lord Jesus. And great grace was upon them all. Nor was there anyone among them who lacked; for all who were possessors of lands or houses sold them, and brought the proceeds of the things that were sold, and laid them at the apostles’ feet; and they distributed to each as anyone had need" (Acts 4:32-35).

It is not only the words of our Lord Jesus Christ, for the plan of God, which consists of the greatness of today's feast. The Baptism of our Lord is also of such importance to us because we have the manifestation of the Holy Trinity. The moment when the Son of God rose up from the water, the voice of God the Father was heard from the sky, testifying for His Son, saying, "This is My beloved Son, in whom I am well pleased" (Mt. 3:17). And the Holy Spirit "in the form of a dove" descended from the heavens upon the head of the Son of God who was before the ages. Theophany, as the feast of the Baptism of the Lord is otherwise called, is of great importance. The three-hypostatic God Himself, revealed the divinity of His Second Person, the incarnate Word of God. It was as if God the Father and the Holy Spirit presented to humanity the Savior of the human race.

Aren't these things good enough for those who don't believe in the Lord Jesus Christ? Doesn't His Divine teaching move them, which is incomparable to that of any human? Are not His miracles good enough, with which Christ confirmed His message? Isn't it enough for them that His message was sealed with His Precious Blood on the terrible Cross of Golgotha? And the fact that He was resurrected on the third day after His death, and that for forty days, after His resurrection, He revealed Himself many times to His disciples, and He completed the work of saving the world with His glorious ascension to the heavens on the Mount of Olives?

O, Son of God! O, our Savior, Lord Jesus Christ! In the works of Your love, in Your countless miracles, add another miracle: touch with Your right hand their hearts of stone and give them a "heart of flesh". Amen.