A Scenic Icon Inspired by the Prayer of St. Sophronios of Jerusalem for the Great Sanctification of the Waters 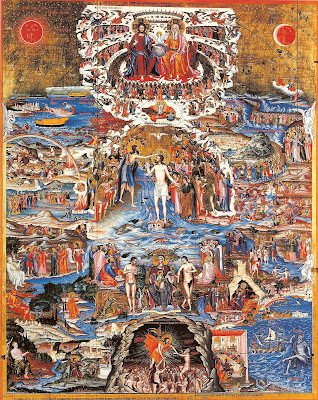 An important part of the Service of the Great Sanctification is the prayer in which is uttered "Great are You O Lord" (Μέγας ει Κύριε) written by the Holy Patriarch Sophronios of Jerusalem. This is an excellent example of theological thought and literary discourse. In this prayer with poetic phrases the Great Feast of Theophany is praised, and it begins with the word "Today", which is repeated twenty times with rich verses in images that follow one after the other. In the middle of the prayer, the Priest says in a loud voice: "Great are You O Lord and marvelous our Your works and no word is sufficient to praise Your marvels." This is the peak moment of the sacramental ritual.

Toplou Monastery is a 15th century monastery located in a dry and barren area in the Lasithi region, on the eastern part of the island of Crete in Greece. There one can find an amazing icon called "Great Are You O Lord" with 61 scenes inspired by the Prayer of Saint Sophronios of Jerusalem in the Service of the Great Sanctification. At the bottom of this icon there is an inscription in Greek letters, but with misspellings: "Ιωάννου πόνημα Κορνάρου εις τους 25 χρόνους της ηλικίας του δηα συνδρομής δε του Πανοσιωτάτου κυρου Παρθενίου Ιερομονάχου ηγουμένου το επίκλην Καφούρος εις τον Ε χρόνον της ηγουμενίας αυτού, αψο" (The work of John Kornaros in the 25th year of his age through the contribution of the All-Venerable lord Parthenios the Hieromonk the abbot of Kaphouros in the 5th year of his abbotship, in 1770.). On the left there is another inscription: "Δέησης του δούλου του Θεού Δημητρίου προσκυνητού, συμβήας και των τέκνων αυτού" (Prayer of the servant of God Demetrios the pilgrim, his wife and his children.). From this we see how important the Service of the Great Sanctification is for the life of the Church and how the theology and the inexpressible mystery of the incarnation of the Word of God became words and art.
The Theophany Prayer of St. Sophronios of Jerusalem
John at 2:01:00 PM
Share
‹
›
Home
View web version