The Veneration of Saint Dionysios in Zakynthos 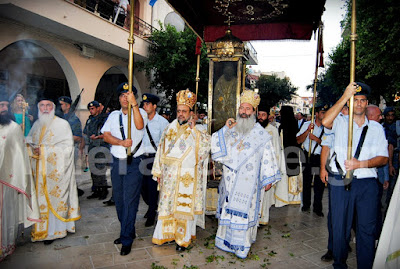 By Dionysis Flemotomos
The memory of Saint Dionysios, as everyone knows, is celebrated on December 17. It is, as it is typically called, the feast of "our Saint", without any other elaboration.

Much could be said about his veneration and the honor bestowed on him by his fellow-natives, and endless disagreements were created, especially by the fanatical theologians, since the Saint often substitutes even God in the conscience of Zakynthians. Thus the expression "I do not believe in gods and religions, but I believe in the Saint" is an additional example of local uniqueness and shows the bond of all the inhabitants of the island with the "native" Saint, who lived on their soil and understands them like nobody else. In fact, he is completely theirs and that is why they supplicate him as: "Agios mou Kormaki" (my Holy Body) which is a beautiful expression emphasizing his physical presence among them, or the more humane: "Agios mou Sigouros" (my Saint Sigouros), invoking his surname.

Familiar, warm, but also very Christian is the habit of the people of Zakynthos to make their cross every morning, turning to his church, which gives them a sense that the Saint will be their guardian throughout the day, but also they often go to venerate at his shrine and to confide in him all the secrets of their soul. So we will often find people in the "Saint's room" telling him that they married off their daughter, that their son went to university or that their business is going well and for that they thank him. An example of their human-scale veneration of their own Saint was the habit of students to go to his church on exam days and throw the books in front of him to open the page of the subject which the test would be based on!
Zakynthians often say, "if it is the Saint's will" and not "if it is God's will", as well as "may the Saint grant it" and "may the Saint help us". And there is not one household on the island that does not have an icon of the Saint forgiving the murderer of his brother, making him therefore a model of mutual forgiveness.

Even the baptismal names with the absolute dominance of his own, which exist on the island, show the love and honor towards his person. In fact, apart from the very frequent "Dionysios" and "Dionysia", there are also "Draganigos" which was his secular name, "Sigouros" which was his surname, and "Daniel" which was his name when he was tonsured a monk. These are given very often and they all celebrate on the day of his commemoration.

This excessive veneration of the Zakynthians for their Saint has also passed into poetry. Indicatively, we will mention Dionysios Solomos, who is named after the Saint, and in his sonnets hails the Saint as being able to save the island from all calamities. There is also "The Miracle" by Ioannis P. Tsilimigra, where the mother of a blind son seeks help from doctors and prays to God for his healing, but it all came to nothing until she sees the relic of Saint Dionysios being processed along the street, and she goes and places her gold chain over his neck, which leads to the healing of her son. Here the Saint is depicted as being superior even to God!

In the context of this peculiar veneration of the Zakynthians to their Saint, let us see the way of his celebration, which has a pre-festive form of Twelve Days.

The celebration of the feast lasts for three days, but in fact it starts exactly a week before. On the night of December 9th and with the setting of the sun, the "First Sign" takes place, which is a first call, as the word implies, for the coming annual day. So, at sunset, the bells from the towering bell tower ring happily, extensively, while at the same time twelve cannons are shot. This number is equal to the months of the year, but also to the days that the relic remains at "his Gate". These are the three days on the anniversary of his commemoration, three days on the feast of the translation of his relic, one at Christmas, one at Theophany, and four from Great Friday until Bright Monday. It is not a coincidence that the greatest feasts of the Church are associated also with the display and veneration of Saint Dionysios.

The main feast of the Saint begins at eleven in the morning of the eve, with the departure of the relic from the coffin and its placement in front of the Holy Altar. The event is greeted with cannon fire, bells ringing from all the bell towers of the island, whistles from the boats and bullets from all the houses. In front of the iconostasis, the incense burner is burning next to lighted candles, while the flags are solemnly raised on the balconies and ship platforms. Schools and public services stop operating and everyone exchanges the characteristic wish: "May the Saint help us" and "Until next year".

Characteristic is the change of his "slippers", which either whole or in pieces are given as a blessing to the faithful and which in ornate, wood-carved and gilded cases adorn many an iconostasis.

In the afternoon, before vespers, the official descent of the Saint takes place into the church and after his triple procession inside the church, the well-known "rounds", the holy relic is placed at "his Gate". The band plays the established "Preghiera" in the women's quarters and the cannons transmit the happy event to the island again.

The next day's litany, at eleven in the morning, is the biggest religious and secular event of the year. This was the reason why the painter and satirical poet Nikolaos Koutouzis immortalized it, as was done in the time of the Venetians. Scattered streams in the streets and red "pines" on the balconies are its features and give this great moment color and uniqueness. Cannons (the "castle") are necessary again when the Saint appears at the door of his temple, but also when he returns to it.

In the Midst of Cannon Fire

The relic of the Saint remains for three days "at the Gate" and with the well-known "Basimata" (December 19), is processed again inside the temple, amid cannon fire, bullets, bells and the band playing, as on the eve, and it is deposited in his shrine.

To venerate the Saint for a Zakynthian, it is almost something like receiving communion. That is why the characteristic question: "did you venerate?" is often addressed to each other these days and shows how necessary this action is, just as we say: "did you receive?" regarding communion.

Finally, on the evening of the feast, all the houses on the island make pancakes, honoring the feast and the names they celebrate.