A Summary of the Old Testament (St. Jerome) 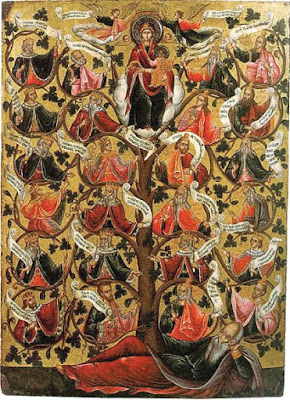 By St. Jerome
(Excerpt from Letter 53 to Paulinus of Nola)
Genesis, we shall be told, needs no explanation; its topics are too simple — the birth of the world, the origin of the human race, the division of the earth, the confusion of tongues, and the descent of the Hebrews into Egypt!

Exodus, no doubt, is equally plain, containing as it does merely an account of the ten plagues, the decalogue, and sundry mysterious and divine precepts!

The meaning of Leviticus is of course self-evident, although every sacrifice that it describes, nay more every word that it contains, the description of Aaron's vestments, and all the regulations connected with the Levites are symbols of things heavenly!

The book of Numbers too — are not its very figures, and Balaam's prophecy, and the forty-two camping places in the wilderness so many mysteries?

Deuteronomy also, that is the second law or the foreshadowing of the law of the gospel, — does it not, while exhibiting things known before, put old truths in a new light?

So far the 'five words' of the Pentateuch, with which the apostle boasts his wish to speak in the Church (1 Cor. 14:19).

Then, as for Job, that pattern of patience, what mysteries are there not contained in his discourses? Commencing in prose the book soon glides into verse and at the end once more reverts to prose. By the way in which it lays down propositions, assumes postulates, adduces proofs, and draws inferences, it illustrates all the laws of logic. Single words occurring in the book are full of meaning. To say nothing of other topics, it prophesies the resurrection of men's bodies at once with more clearness and with more caution than any one has yet shown. "I know," Job says, "that my redeemer lives, and that at the last day I shall rise again from the earth; and I shall be clothed again with my skin, and in my flesh shall I see God. Whom I shall see for myself, and my eyes shall behold, and not another. This my hope is stored up in my own bosom."

I will pass on to Jesus (Joshua) the son of Nave (Nun) — a type of the Lord in name as well as in deed — who crossed over Jordan, subdued hostile kingdoms, divided the land among the conquering people and who, in every city, village, mountain, river, hill-torrent, and boundary which he dealt with, marked out the spiritual realms of the heavenly Jerusalem, that is, of the Church (Gal. 4:26).

In the book of Judges every one of the popular leaders is a type.

Ruth the Moabitess fulfils the prophecy of Isaiah: "Send a lamb, O Lord, as ruler of the land from the rock of the wilderness to the mount of the daughter of Zion."

Under the figures of Eli's death and the slaying of Saul, Samuel shows the abolition of the old law. Again in Zadok and in David he bears witness to the mysteries of the new priesthood and of the new royalty.

The third and fourth books of Kings called in Hebrew Malâchim give the history of the kingdom of Judah from Solomon to Jeconiah, and of that of Israel from Jeroboam the son of Nebat to Hoshea who was carried away into Assyria. If you merely regard the narrative, the words are simple enough, but if you look beneath the surface at the hidden meaning of it, you find a description of the small numbers of the Church and of the wars which the heretics wage against it.

The twelve prophets whose writings are compressed within the narrow limits of a single volume, have typical meanings far different from their literal ones.

Hosea speaks many times of Ephraim, of Samaria, of Joseph, of Jezreel, of a wife of whoredoms and of children of whoredoms, of an adulteress shut up within the chamber of her husband, sitting for a long time in widowhood and in the garb of mourning, awaiting the time when her husband will return to her.

Joel the son of Pethuel describes the land of the twelve tribes as spoiled and devastated by the palmerworm, the canker-worm, the locust, and the blight, and predicts that after the overthrow of the former people the Holy Spirit shall be poured out upon God's servants and handmaids; the same spirit, that is, which was to be poured out in the upper chamber at Zion upon the one hundred and twenty believers. These believers rising by gradual and regular gradations from one to fifteen form the steps to which there is a mystical allusion in the "psalms of degrees."

Amos, although he is only "an herdsman" from the country, "a gatherer of sycomore fruit," cannot be explained in a few words. For who can adequately speak of the three transgressions and the four of Damascus, of Gaza, of Tyre, of Idumaea, of Moab, of the children of Ammon, and in the seventh and eighth place of Judah and of Israel? He speaks to the fat cattle that are in the mountain of Samaria, and bears witness that the great house and the little house shall fall. He sees now the maker of the grasshopper, now the Lord, standing upon a wall daubed or made of adamant, now a basket of apples that brings doom to the transgressors, and now a famine upon the earth "not a famine of bread, nor a thirst for water, but of hearing the words of the Lord."

Obadiah, whose name means the servant of God, thunders against Edom red with blood and against the creature born of earth. He smites him with the spear of the spirit because of his continual rivalry with his brother Jacob.

Jonah, fairest of doves, whose shipwreck shows in a figure the passion of the Lord, recalls the world to penitence, and while he preaches to Nineveh, announces salvation to all the heathen.

Micah the Morasthite a joint heir with Christ announces the spoiling of the daughter of the robber and lays siege against her, because she has smitten the jawbone of the judge of Israel.

Nahum, the consoler of the world, rebukes "the bloody city" and when it is overthrown cries: "Behold upon the mountains the feet of him that brings good tidings."

Habakkuk, like a strong and unyielding wrestler, stands upon his watch and sets his foot upon the tower that he may contemplate Christ upon the cross and say "His glory covered the heavens and the earth was full of his praise. And his brightness was as the light; he had horns coming out of his hand: and there was the hiding of his power."

Zephaniah, that is the bodyguard and knower of the secrets of the Lord, hears "a cry from the fishgate, and an howling from the second, and a great crashing from the hills." He proclaims "howling to the inhabitants of the mortar; for all the people of Canaan are undone; all they that were laden with silver are cut off."

Haggai, that is he who is glad or joyful, who has sown in tears to reap in joy, is occupied with the rebuilding of the temple. He represents the Lord (the Father, that is) as saying "Yet once, it is a little while, and I will shake the heavens, and the earth, and the sea, and the dry land; and I will shake all nations and he who is desired of all nations shall come."

Zechariah, he that is mindful of his Lord, gives us many prophecies. He sees Jesus, "clothed with filthy garments," a stone with seven eyes, a candle-stick all of gold with lamps as many as the eyes, and two olive trees on the right side of the bowl and on the left. After he has described the horses, red, black, white, and grisled, and the cutting off of the chariot from Ephraim and of the horse from Jerusalem he goes on to prophesy and predict a king who shall be a poor man and who shall sit "upon a colt the foal of an ass."

Malachi, the last of all the prophets, speaks openly of the rejection of Israel and the calling of the nations. "I have no pleasure in you, says the Lord of hosts, neither will I accept an offering at your hand. For from the rising of the sun even unto the going down of the same, my name is great among the Gentiles: and in every place incense is offered unto my name, and a pure offering."

As for Isaiah, Jeremiah, Ezekiel, and Daniel, who can fully understand or adequately explain them?

The first of them seems to compose not a prophecy but a Gospel.

The second speaks of a rod of an almond tree and of a seething pot with its face toward the north, and of a leopard which has changed its spots. He also goes four times through the alphabet in different metres.

The beginning and ending of Ezekiel, the third of the four, are involved in so great obscurity that like the commencement of Genesis they are not studied by the Hebrews until they are thirty years old.

Daniel, the fourth and last of the four prophets, having knowledge of the times and being interested in the whole world, in clear language proclaims the stone cut out of the mountain without hands that overthrows all kingdoms.

David, who is our Simonides, Pindar, and Alcaeus, our Horace, our Catullus, and our Serenus all in one, sings of Christ to his lyre; and on a psaltery with ten strings calls him from the lower world to rise again.

Solomon, a lover of peace and of the Lord, corrects morals, teaches nature, unites Christ and the Church, and sings a sweet marriage song to celebrate that holy bridal.

Esther, a type of the Church, frees her people from danger and, after having slain Haman whose name means iniquity, hands down to posterity a memorable day and a great feast.

The book of things omitted or epitome of the old dispensation is of such importance and value that without it any one who should claim to himself a knowledge of the scriptures would make himself a laughing stock in his own eyes. Every name used in it, nay even the conjunction of the words, serves to throw light on narratives passed over in the books of Kings and upon questions suggested by the Gospel.

Ezra and Nehemiah, that is the Lord's helper and His consoler, are united in a single book. They restore the Temple and build up the walls of the city. In their pages we see the throng of the Israelites returning to their native land, we read of priests and Levites, of Israel proper and of proselytes; and we are even told the several families to which the task of building the walls and towers was assigned. These references convey one meaning upon the surface, but another below it.
John at 4:16:00 PM
Share
‹
›
Home
View web version