The Christmas Canon of Saint John of Damascus 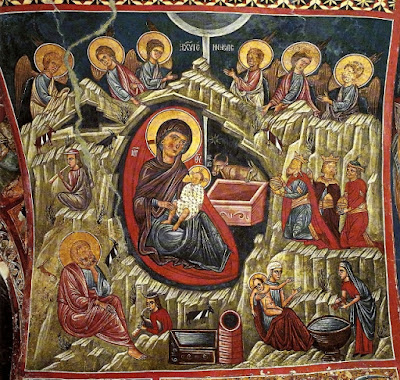 This Canon is listed as the "Second Canon" in the Festal Menaion of Bishop Kallistos Ware and Mother Mary, the "First Canon" being that of St. Gregory the Theologian.
First Canticle

Of old the Master that works wonders saved His people,
Making the watery wave of the sea into dry land;
And now of His own will has He been born from a Maiden,
And so He establishes a path for us whereby we may mount to heaven.
We glorify Him Who in essence is equal to the Father and to mortal men.

Plainly foreshadowed by the burning bush that was not consumed,
A hallowed womb has borne the Word.
God is mingled with the form of mortal men;
And so He looses the unhappy womb of Eve from the bitter curse of old.
We men give Him glory.

A star showed plainly to the Magi
The Word that was before the sun, who has come to make transgression cease.
They saw Thee wrapped in swaddling clothes, within a poor and lowly cave,
Who sharest all our sufferings,
And in joy they gazed upon Thee, who art at once both man and Lord.

Graciously accept, O Benefactor, the praises of Thy servants
And bring down the despiteful and haughty looks of the enemy.
O blessed Lord Who seest all, raise us up far above sin,
And establish Thy singers firm and unshaken
Upon the foundation of the faith.

The choir of shepherds abiding in the fields was overwhelmed
By the strange sight they were counted worthy to behold;
For they looked upon the all-blessed Offspring of an all-pure Bride;
And they saw also the ranks of bodiless angels, who sang
In praise of Christ the King, incarnate without seed.

He who rules the heights of heaven, in His compassion,
Has become such as we are, born of a Maiden who has not known man.
The Word who before was wholly outside matter, in these last times
Has assumed the material substance of the flesh
That so He might draw unto Himself fallen Adam, the first-formed man.

Of old Habakkuk the Prophet was counted worthy to behold ineffably
The figure and symbol of Christ's birth,
And he foretold in song the renewal of mankind.
For a young babe, even the Word, has now come forth from the Mountain that is the Virgin,
Unto the renewal of the peoples.

Of Thine own will, O Most High, Thou hast come forth equal to mortal men,
Taking flesh from the Virgin,
To purge the poison of the serpent's head.
God by nature, Thou leadest all
From the gates that know no sun to the life-giving light.

O ye people that before were sunk in corruption,
But now have escaped wholly from the perdition of the adversary,
Lift up your hands and clap them in songs of praise,
Honouring Christ alone, our Benefactor,
Who in His compassion is come into our midst.

O Virgin, sprung from the root of Jesse,
Thou hast passed beyond the boundaries of human nature,
For thou hast borne the pre-eternal Word of the Father.
According to His good pleasure, by a strange self-emptying,
He passed through thy womb, yet kept it sealed.

From the night of deeds of dark error we watch vigilantly,
And sing to Thee, O Christ, as to our Benefactor.
Come to us and grant us cleansing:
Make the path easy for us,
Whereby we may ascend and so attain to glory.

The Master, by His coming in the flesh, has cut clean through
The harsh enmity of the flesh against Him,
And has destroyed the might of the murderer of our souls,
Uniting the world to the immaterial essences,
He has made the Father merciful to the creation.

The people that before walked in the darkness
This day have seen a light from the beacon on high.
The Son offers to God the nations as His inheritance, bestowing grace past telling
Where sin once flourished more abundantly.

Enclosed in the uttermost depths of the sea,
Jonah entreated Thee to come and still the storm.
And I, O Christ, priced by the dart of the tyrant,
Call upon Thee, the Slayer of evil,
Beseeching Thee to come quickly and deliver me from my slothfulness.

God the Word, who was in the beginning with God,
Seeing our nature powerless to guard unharmed
Its ancient fellowship with Him, now grants it new strength:
Abasing Himself, in a second act of fellowship
He makes it once again free from the passions.

For our sakes He has come froth from the loins of Abraham,
To raise up as His sons those who were sadly fallen
Into the darkness of sin that bowed them down to the earth;
And He that dwells in light has now been pleased, despite His high dignity,
To dwell in a manger for the salvation of mankind.

Caught and held fast by love for the King of all,
The Children despised the impious threats of the tyrant in his boundless fury;
And as the terrible fire withdrew before them,
They said to the Master, 'Unto all ages blessed art Thou.'

The seething and roaring furnace, heated seven-fold,
In its fury burnt up the servants of the king,
But spared the Children:
For as the flame encircled them, the Lord,
Rewarding their godliness, shed upon them abundant dew.

O Christ our Defender, Thou has put to shame the adversary of man,
Using as shield Thine ineffable Incarnation!
Taking man's form, Thou hast now bestowed upon him the joy
Of becoming godlike: for it was in hope of this
That of old we fell from on high into the dark depths of the earth.

Thou hast overthrown by Thine almighty power
The fierce sin that raised its head in wanton pride,
And raged with blasphemy throughout a world gone mad.
Those whom in times past it dragged down, today Thou hast delivered from its snares,
O Benefactor, who of Thine own will hast taken flesh.

The Children of the Old Covenant who walked in the fire, yet were not burnt,
Prefigured the womb of the Maiden that remained sealed,
When she gave birth in fashion past nature.
It was the same grace of God that brought both these wonders to pass in a miracle
And rouses the peoples to sing in praise.

Shunning the guilt of its vain attempt to become as God,
The whole creation sings, like the three Children, in praise of the eternal Word, who now empties Himself:
Yet sings with trembling, afraid to bring
A prayer unacceptable to God, for it is subject to decay,
Even though the divine wisdom maintains it ever in being.

Thou hast come, O Resurrection of the nations,
To bring back the nature of man from its wanderings,
Leading it from the hills of the wilderness to a pasture rich in flowers.
Do Thou destroy the violent strength of the murder of man,
O Thou who in Thy providence hast appeared as man and God.

Today the Virgin bears the Master within the Cave.

It would be easier for us, because free from all danger, to keep silence in fear:
While it is hard indeed, O Virgin, in love to devise songs harmoniously put together.

But do thou, O Mother, give us strength so we may fulfill our good intent.

Today the Master is born as a babe of a Virgin Mother.

Today shepherds behold the Saviour wrapped in swaddling clothes and laid in a manger.

Today the Master who cannot be touched is wrapped as a babe in swaddling rags.

We have seen, O pure Mother, the dim figures of the Word and the shades that are past;
And now that He has newly appeared from the closed gate,
We who are counted worthy to behold the Light of truth, as is meet and right, bless thy womb.

Today all creation rejoices greatly and makes glad, for Christ is born of a Virgin Maid.

The Powers of heaven declare unto the world that the Saviour, Lord, and Master has been born.

Magnify, O my soul, the power of the undivided Godhead in Three Persons!
The people that delights in Christ has attained its desire,
Being counted worthy of the coming of God,
And now they humbly pray for the regeneration that gives life.
O undefiled Virgin, grant them the grace,
To worship Christ in His glory.
John at 3:35:00 PM
Share
‹
›
Home
View web version