Sermon on the Nativity of Christ (St. Cyril of Alexandria) 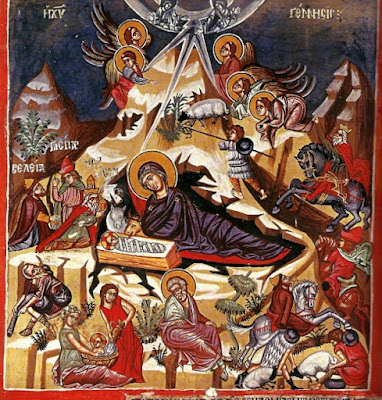 On the Nativity of Christ

Christ therefore was born in Bethlehem at the time when Augustus Caesar gave orders that the first enrolment should be made. But what necessity was there, some one may perhaps say, for the very wise Evangelist to make special mention of this? Yes, I answer, it was both useful and necessary for him to mark the period when our Saviour was born, for it was said by the voice of the Patriarch: "The head shall not depart from Judah, nor a governor from his thighs until He come, for Whom it is laid up, and He is the expectation of the Gentiles." That we therefore might learn that the Israelites had then no king of the tribe of David, and that their own native governors had failed, with good reason he makes mention of the decrees of Caesar, as now having beneath his sceptre Judaea as well as the rest of the nations: for it was as their ruler that he commanded the census to be made.
2:4 - Because he was of the house and lineage of David.

The book of the sacred Gospels referring the genealogy to Joseph, who was descended from David's house, has proved through him that the Virgin also was of the same tribe as David, inasmuch as the Divine law commanded that marriages should be confined to those of the same tribe: and the interpreter of the heavenly doctrines, the great apostle Paul, clearly declares the truth, bearing witness that the Lord arose out of Juda. The natures, however, which combined unto this real union were different, but from the two together is one God the Son, without the; diversity of the natures being destroyed by the union. For a union of two natures was made, and therefore we confess One Christ, One Son, One Lord. And it is with reference to this notion of a union without confusion that we proclaim the holy Virgin to be the mother of God, because God the Word was made flesh and became man, and by the act of conception united to Himself the temple that He received from her. For we perceive that two natures, by an inseparable union, met together in Him without confusion, and indivisibly. For the flesh is flesh, and not deity, even though it became the flesh of God: and in like manner also the Word is God, and not flesh, though for the dispensation's sake He made the flesh His own. But although the natures which concurred in forming the union are both different and unequal to one another, yet He Who is formed from them both is only One: nor may we separate the One Lord Jesus Christ into man severally and God severally, but we affirm that Christ Jesus is One and the Same, acknowledging the distinction of the natures, and preserving them free from confusion with one another.
2:5 - With Mary, his betrothed wife, being great with child.

The sacred Evangelist says that Mary was betrothed to Joseph, to shew that the conception had taken place upon her betrothal solely, and that the birth of the Emanuel was miraculous, and not in accordance with the laws of nature. For the holy Virgin did not bear from the immission of man's seed. And what was the reason of this? Christ, Who is the first-fruits of all, the second Adam according to the Scriptures, was born of the Spirit, that he might transmit the grace (of the spiritual birth) to us also: for we too were intended, no longer to bear the name of sons of men, but of God rather, having obtained the new birth of the Spirit in Christ first, that he might be "foremost among all," as the most wise Paul declares.

And the occasion of the census most opportunely caused the holy Virgin to go to Bethlehem, that we might see another prophecy fulfilled. For it is written, as we have already mentioned, "And thou Bethlehem, house of Ephratah, art very small to be among the thousands of Judah: from thee shall come forth for Me to be Ruler in Israel!"

But in answer to those who argue that, if He were brought forth in the flesh, the Virgin was corrupted: and if she were not corrupted, that He was brought forth only in appearance, we say; the prophet declares, "the Lord, the God of Israel, hath entered in and gone out, and the gate remaineth closed." If, moreover, the Word was made flesh without sexual intercourse, being conceived altogether without seed, then was He born without injury to her virginity.
2:7 - And she brought forth her firstborn Son.

In what sense then her firstborn? By firstborn she here means, not the first among several brethren, but one who was both her first and only son: for some such sense as (his exists among the significations of "firstborn." For sometimes also the Scripture calls that the first which is the only one; as "I am God, the First, and with Me there is no other." To shew then that the Virgin did not bring forth a mere man, there is added the word firstborn; for as she continued to be a virgin, she had no other son but Him Who is of the Father: concerning Whom God the Father also proclaims by the voice of David, "And I will set Him Firstborn high among the kings of the earth." Of Him also the all-wise Paul makes mention, saying, "But when He brought the First-begotten into the world, He saith, And let all the angels of God worship Him." How then did He enter into the world? For He is separate from it, not so much in respect of place as of nature; for it is in nature that He differs from the inhabitants of the world: but He entered into it by being made man, and becoming a portion of it by the incarnation. For though He is the Only-begotten as regards His divinity, yet as having become our brother, He has also the name of Firstborn; that, being made the first-fruits as it were of the adoption of men, He might; make us also the sons of God.

Moreover if the first are confessedly the cause of the second, but God and the Son of God are first, then is the Son the cause of those who have the name of sons, inasmuch as it is through Him that they have obtained the appellation. He therefore who is the cause of the second sons may justly be called the Firstborn, not as being the first of them, but as the first cause of their receiving the title of sonship. And just as the Father being called the first----"for I, He saith, am the first, and I am after these things"----assuredly will not compel us to regard Him as similar in nature to those that are after Him; so also though the Son be called the first of creation, or the Firstborn before all creation, it by no means follows that He is one of the things made: but just as the Father said "I am the first," to shew that He is the origin of all things, in the same sense the Son also is called the first of creation. "For all things were made by Him," and He is the beginning of all created things, as being the Creator and Maker of the world.
2:7 - And she laid him in the manger.

He found man reduced to the level of the beasts: therefore is He placed like fodder in a manger, that we, having left off our bestial life, might mount up to that degree of intelligence which befits man's nature; and whereas we were brutish in soul, by now approaching the manger, even His own table, we find no longer fodder, but the bread from heaven, which is the body of life.
John at 10:06:00 AM
Share
‹
›
Home
View web version