Saint Simon the Myrrhgusher and the Star of New Bethlehem 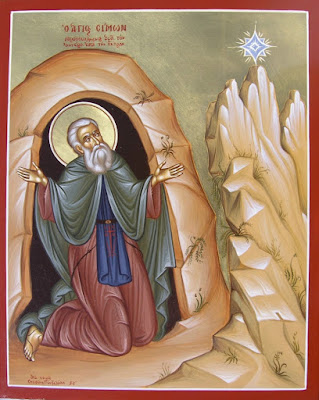 When Saint Simon the Myrrhgusher, founder of Simonopetra Monastery on Mount Athos, was living as hermit in a cave on the Holy Mountain, after many years of struggling there and subjecting himself to every form of hardship, he had the following vision as the feast of the Nativity of Christ drew near. One night, Simon exited the cave and beheld a bright star in the heavens above a large high rock opposite his cave. This star was seen frequently by Simon over the course of many nights, remaining in the same place above the high rock. Seeing that this was no ordinary star, Simon thought that perhaps it was a sign of the devil to lead him astray, so he ignored it.

When the solemn eve for the feast of the Nativity of Christ arrived, Simon then saw the star descend and stand over the high rock that lay opposite, and then he heard a divine voice utter: "Here, you must lay the foundation of your coenobium, O Simon, for the salvation of souls. Rightly were you careful, but no longer be disbelieving; for I desire to be your helper. Therefore, heed well and doubt not, lest you should suffer evil." Three times Simon heard the divine voice utter these words, and he trembled. 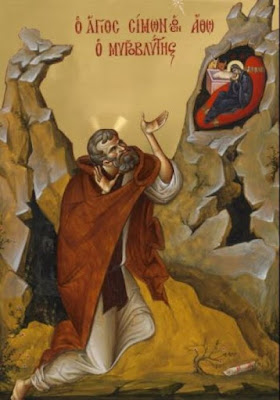 Having heard these instructions, Simon was then caught up in divine ecstasy, and he found himself to be in Bethlehem of Judea. There he was in the company of the shepherds of old, who heard the angelic choir glorify the birth of the Lord. With this vision, Simon's fear completely departed and was replaced with spiritual ecstasy and rejoicing. In this state he also beheld the Lady Theotokos, the righteous Joseph and his sons, and our Lord as a newborn infant wrapped in swaddling clothes, lying in a manger. Simon did not disclose this occurrence until a later time to his disciples.

A few days after this vision and the feast of the Nativity, three wealthy men of the world came to him, who were brothers of the same parents. After they confessed their sins to the holy man, they fell before his feet and begged him to receive them under obedience and have him as their spiritual guide. Saint Simon said to himself: "Perhaps, they are to be my fellow laborers in the building of a coenobium, in accordance with the vision I beheld?" He therefore retained them in obedience to Christ.

Eventually, after a great amount of labor, the coenobium was built, and it was called New Bethlehem Monastery, because of all that took place there. Upon the death of its founder, it became more popularly known as Simonopetra Monastery. 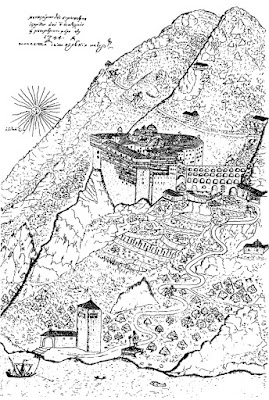 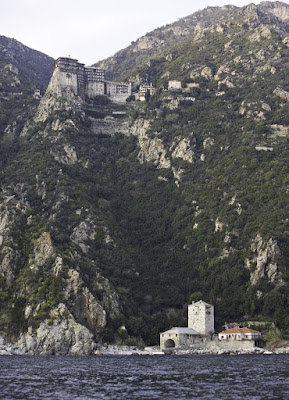