The circumstances of his life while still in the world are unknown. He started his ascetic path at the Priluki Monastery of the Savior at Vologda, and he received monastic tonsure at the Saint Cyril of White Lake Monastery. Saint Ignatius then departed to the vicinity of Loma seeking seclusion and there founded a hermitage, which gradually attracted disciples.

The desire for an isolated hermitic life again compelled the Venerable Ignatius to leave the monastery he had founded. Having transferred the administration of his monastery to one of his disciples, the ascetic withdrew to the Vadozhsky volost, to the banks of the Darovitsa River, which flows into the Sarau River one mile from the place of the monk's settlement, and began to live there as a hermit. The place was silent, wooded, and the human settlements were five or six miles away. A barely noticeable path winding along the bank of the Darovitsa River was the only way to reach this place. 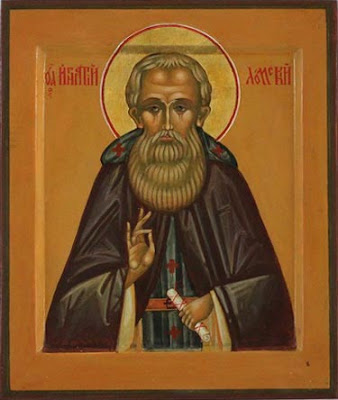 He earned food for himself (also for the monk Joachim (other sources name him Isaac), who lived three miles from him) by weaving bast shoes, which he left on the road. Passers-by exchanged the bast shoes for bread. In the same place, the Venerable Ignatius built a temple in honor of the Protection of the Most Holy Theotokos, during which the Vadozhsky Mother of God was founded. In the eighteenth century this hermitage was abolished, only the Church of the Savior in Loma remained, in which the relics of the Venerable Ignatius, glorified through miracles, rested. The holy ascetic died in 1591.

The veneration of the memory of the Saint began long ago, perhaps soon after his death. On the altar Gospel, donated to the monastery in 1658, there is an inscription in which the Venerable Ignatius is called "the great wonderworker." In 1659, Tsar Alexy Mikhailovich donated several lands from different lands to the poor Loma Monastery and in his letter called its founder "a venerable father and wonderworker." In the Church of the Savior in Loma, there are eight ancient icons with images of Saint Ignatius, testifying to the long-standing veneration of him. 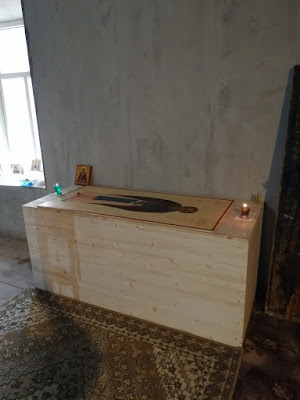 In an old biography of the Saint, compiled in the middle of the seventeenth century, it is reported that local residents “with faith in the All-Merciful Savior and the Most Pure Theotokos and the Venerable Wonderworker Ignatius go to that well for health, they wash with that water and drink it." In addition, with the blessing of the abbot, "that water is collected in vessels and carried home, and their families with faith and blessing for health wash with that water and drink."
John at 2:07:00 PM
Share
‹
›
Home
View web version