Saint Sebastian and the 1576–78 Plague of Milan

According to surviving chronicles, plague entered Milan in either late July or early August of 1576 and reigned until the city was declared ‘liberated’ on 20 January 1578, meaningfully coinciding with the Roman Catholic feast day of St. Sebastian, who was already known by then as one of the premier protectors against pestilence. Over those eighteen months, the city lost over 17,000 individuals, roughly 15% of her citizens. No one knew for certain how plague could have breached the city’s walls, given that Milan was already on alert. Trent, the ground zero for the epidemic, was struck just a year earlier. From there, the disease progressed first to Venice and Mantua in the early part of 1576 before finally reaching Milan. Within a month of the outbreak, most of Milan’s nobility had fled. Even more distressing for the Milanese, ‘the evils produced by this state of things were increased’ when the Governor, the Marquis of Ayamonte, likewise abandoned his city and took refuge in nearby Vigevano. Conditions deteriorated throughout the autumn on both the medical and the civic fronts. Trade and commerce faltered, and it became difficult for the government to provision the city with goods from uninfected regions. The city’s plague hospital quickly filled to capacity, and more temporary straw huts for the sick were needed than could be built. Increasingly draconian measures were enacted – such as the purging of infected homes, closure of non-essential shops, and a general quarantine – all of which further exacerbated the city’s financial troubles.

Archbishop San Carlo Borromeo (1538-1584) took over where the Milanese officials left off, marshalling the clergy to maintain the city’s temporal and spiritual welfare. He organised the cleaning of homes and streets, and ordered the culling of dogs and cats; he conducted charitable relief work, selling his possessions, spending his own wealth, and borrowing money when his personal funds ran low; and, dismissing concerns over infection, he made visitations across the diocese and even personally ministered to the sick.

One of Borromeo’s most frequently noted pastoral acts during the crisis was the organisation of three general processions in October 1576. Each of the processions began at the city’s cathedral, with the first terminating at the Basilica of Sant’Ambrogio, the second at San Lorenzo, and the third at Santa Maria presso San Celso. With the added incentive of a plenary indulgence, the processions attracted an enormous number of participants, including any noblemen and civic officials who were left, ordinary citizens, and at least a thousand flagellants in tow. Borromeo wore a noose around his neck and walked barefoot to evoke the image of a condemned criminal. During the first procession, he reportedly cut his foot on an iron railing, but instead of tending to the wound, he walked on, letting his blood flow freely for all to see. Witnesses to the wound were all moved to compassion and cried out, ‘Miserere! Miserere!’ The third and final procession was to be the most solemn. Borromeo bid the parochial clergy to bring out their most prized relics in order to both move the masses to devotion and appeal to the saints. He himself carried the prized Milanese relic from the Cathedral, the Holy Nail, attached to a cross. At the close of this procession, Borromeo returned to the Cathedral and began a forty-hour devotion. 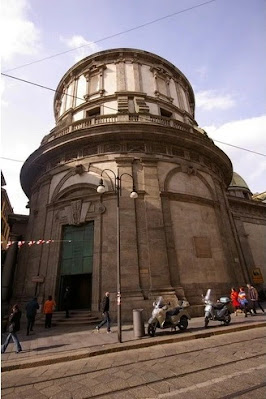 Archbishop Borromeo also invoked the assistance of St. Sebastian. On October 15, 1576, Borromeo officially pronounced a public vow which included the reconstruction of the city’s ancient church of San Sebastiano. The project was entrusted to Carlo’s favorite architect, Pellegrino Tibaldi, and the foundation stone to the new building was laid on September 6, 1577. On January 20, 1578, on the feast of St. Sebastian, the plague was officially declared to be over.

Pellegrino Tibaldi worked on the church until 1587. Construction continued under Pietro Antonio Barca and Fabio Mangone. The round Mannerist building, whose design was likely influenced by Rome’s Pantheon and which transgressed the architectural norms of the Counter Reformation, was finally finished in the seventeenth century. Reflecting its ambiguity as both a church and a civic structure, the building is known as La Chiesa di San Sebastiano as well as Il Tempio Civico di San Sebastiano.
John at 11:55:00 AM
Share
‹
›
Home
View web version