Life of Saint Parthenios of Chios: Based on Local Testimonies from the Clergy and Laity of Chios

Our Venerable Father Parthenios was born in the village of Dafnonas on the island of Chios in the year 1815 to pious parents, Michael and Antonia Frangoskoufis (or Meni). Saint Makarios the Notaras, Metropolitan of Corinth, who was then living as an ascetic in Chios, prophesied about the birth of the child to his mother, who was already advanced in age, as follows: "You will have a boy and name him Polydoros. He will become a monk and through him many souls shall be saved." Polydoros was thus born, grew up, became a tradesman, and by the age of twenty was engaged to be married. However, a year later his fiancée died. Upon his return from a journey he visited her grave, and removing the stone covering he saw her rotting corpse full of worms. Taking a handful of worms in his hands he philosophized about death and the vanity of worldly things. It was then that he decided to abandon everything.

He received the Great Angelic Schema at Nea Moni Monastery in Chios, which was established in the tenth century, and he was renamed Parthenios. In the register of the Nea Moni Monastery, dated 5/7/1883, the following is written: "Elder Parthenios, specifically Frangoskoufis, 200gr." He was not even 35 years old and they were calling him "Elder Parthenios". Then he discovered a steep cave on Mount Penthodos, where he decided to settle. In his sleep he saw the Holy Apostle and Evangelist Mark dressed as a monk and calling him "neighbor" and urging him to come and find him. Indeed, only a few meters above his place of asceticism he discovered an abandoned chapel that had been dedicated to Saint Mark, so he began to restore it into a small monastery dedicated to Saint Mark.

Soon a large number of monks flocked to him, and they lived together an exemplary monastic life, deeply inspired and influenced by the tradition of the Kollyvades which had been established by Saint Makarios Notaras, Saint Arsenios of Paros, Saint Nikephoros of Chios and Saint Nikodemos the Hagiorite.  In both winter and summer they ate only once a day, and their chief occupation was agricultural work. At 3:00PM they did the Ninth Hour with Vespers and ate a piece of antidron. At the time of rest they neither slept nor talked, but they carved small wooden crosses from cypresses (which the Saint distributed to the faithful as a blessing) as a monk did a reading. The Prayer of the Heart was whispered from one end of the monastery to the other. Daily Elder Parthenios taught his monks to contemplate the mystery of death and the time of the departure of their souls, urging the monks to evaluate themselves every night and to sleep with tears in their eyes.

Venerable Parthenios reposed in peace on the 8th of December in the year 1883 and was buried in the narthex of the katholikon of the monastery. 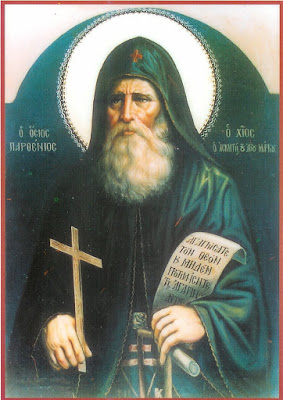 According to the testimonies of his spiritual children and their descendants, the Saint was found worthy by God to receive the gift of foresight. He foretold the death of one of his young monks and allowed him to properly prepare. On the day of the destruction of Chios by a deadly earthquake on 22 March 1881 the Saint cried out: "A great mountain will fall and strike Chios." Furthermore, he prevented a layman named Constantine from leaving the monastery shortly before the earthquake struck. Only when it stopped did Elder Parthenios tell Constantine: "Go now and uncover your wife and children; be careful however lest you hurt them, since they are all alive." Indeed Constantine went and found his family unharmed. His sermon to those who rushed to the monastery for help was: "Repent my children, or Chios will sink." The Lord revealed to him the hidden places of the heart of many of the faithful, and he made it easier for them to confess their sins during confession.

Many people would completely fast for twelve hours before receiving antidron from his hands as a blessing.

Even when the Saint was alive many of the faithful, knowing his boldness before God and spiritual gifts, would privately ask for his intercessions and receive his help, such as a the captain of a boat who was rescued at sea by the Saint, and in return had a small likeness of his boat made of silver which he dedicated to the Monastery of Saint Mark.

Besides the relics of the Saint giving off a beautiful fragrance, many miracles have also been attributed to Saint Parthenios till this day.
John at 12:27:00 PM
Share
‹
›
Home
View web version