Elder Nektarios Marmarinos, Founder of the Monastery of Saint Patapios in Loutraki (+ 2019)

By Archimandrite Demetrios Kavvadias
Elder Nektarios was born on November 3, 1921 in saint-bearing and saint-raising Aegina and was baptized with the name Kyriakos. He was the son of the poor but pious islanders Photios and Evangelia Marmarinos and the brother of Anastasios, Michael and Marina (who died at the age of twenty during the years of German Occupation from tuberculosis). With his beloved sister he used to visit the Monasteries of Aegina and drink insatiably the honey of the monastic state, envisioning the life of such dedication.

His spiritual father in those years was the late Elder Hieronymos Apostolidis, the Hesychast of Aegina (3/16 October 1966), from whom he learned prayer, piety, love for the services, and cultivated his monastic inclination and call. As a child in his hometown, Kyriakos used to go up to the inaccessible Monastery of Panagia Chrysoleontissa in the mountains of Aegina and, seeing from above the Monastery of Saint Nektarios, he prayed to the great Saint of the twentieth century, saying: "My Saint Nektarios, you who built a monastery here, make me worthy to also build a monastery and to see the brides of our Christ fight the good fight of virtue!" 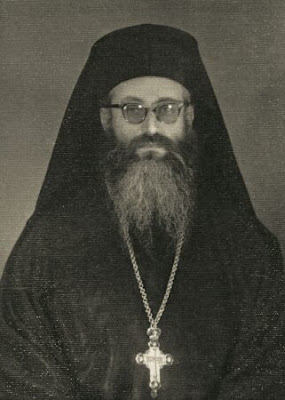 After finishing primary and secondary school, he studied at the Ecclesiastical School of Chania, where he surprised everyone with his wholesome character. After a while, in 1937, the providence of God brought him as a student to the Ecclesiastical School of Corinth, where he received the care and protection of the Metropolitan of Corinth, Michael Constantinidis. In this School he served as Ecclesiasiarch in the Church of Saint Photini.

During his studies, talking to his classmates, he used to talk about the personality and miracles of the Saint of his birthplace Nektarios. His classmates were also eager to talk to him about their own Saint Patapios, whose relic was discovered in the cave of Loutraki in 1904.

They even showed him from the courtyard of the school the cave, which looked like a small white dot on the Geraneia mountains.

When he later ascended the mountain to venerate Saint Patapios with a classmate, he was very impressed and felt in his soul a "divine attraction" for the place. He even prayed: "My Saint, help me to build a Monastery here! To see a monastic fraternity constantly praising the Lord and incense as an acceptable sacrifice to be directed before the throne of His majesty!"

Since then he used to go up to the cave with a blanket in his arms, where after his prayer he would lie down under the shade of the big pine tree to rest. 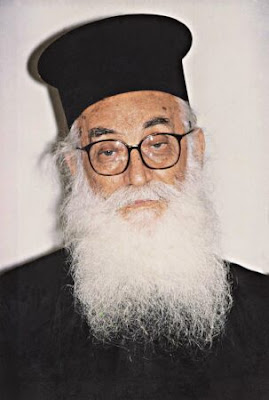 The years passed with a strong desire to build the Monastery of the Saint. But how? He prayed earnestly to find a way to fulfill his wish. And then Saint Patapios revealed his will to him with a vision. In his dream he saw the Saint sitting surrounded by light on the coffin where his relic is kept. He looked at him with heavenly peace and shining from the divine radiance that surrounded him, and he repeated the phrase three times: "The monastery will be built, yes, it will be built!" Thus the young Kyriakos was strengthened in his decision and began to work for the success of his sacred purpose. Somewhere he found a booklet with the life of Saint Patapios and printed it in a book for the benefit of the pilgrims and to start the works of the Monastery.

At the same time he worked spiritually in the Church of Panagia Synoikismos (refugees) of Corinth, where he went to church and to offer his sacred service as a catechist and preacher. He constantly organized excursions to the Cave of the Saint which were carried out with great difficulty because everyone went up there on foot. This work of his, as well as his innate desire for it to become a Monastery, was the reason why he did not study at the University, although he was studious, diligent and intelligent. Metropolitan Michael ordained him a Deacon on February 21, 1941, renaming him "Nektarios", which made him happy since it was the subject of his secret prayer that he did not announce to anyone. On November 8, 1945, he was ordained a Presbyter and then with the laying on of hands an Archimandrite and Spiritual Father. During the five years 1941-1945 he worked intensely in the parish of the Synoikismos of the Panagia, offering valuable services with his liturgies, preaching, catechism and charitable activity.

He organized a catechism with eighty girls, from which later came several of his submissives. He taught them noetic prayer and love for the ecclesiastical and spiritual life. Little Eugenia, now nun Patapia, reverently remembers the sermons of the Elder that she attended for a year and had themes: "Why are we Christians? Why do we go to Church? What must we do to be saved?" She also remembers with special reverence the hike to the Cave, where he and the other girls went up loaded with clothes, water and food. He characteristically testified: "We did not get tired, because we felt that the wings of the presence and love of Saint Patapios were raising us up." 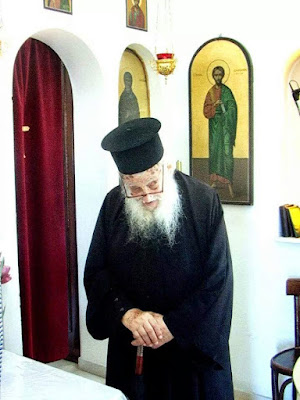 On October 15, 1945, the Metropolitan of Corinth, Michael, ascended for the first time with the young Deacon Nektarios to the Cave and venerated the Saint. He was overwhelmed by the sight of the Holy Relic and composed the Apolytikion, "Boast of Geraneion ...", as well as the Megalynarion, "Crown and honor of Loutraki ...". He also promised to support the work of Elder Nektarios, who with deprivation and a lot of personal effort managed to build a small hostel in 1947, three small cells in 1948 and a dining room in 1949. These were built on various levels of the mountain slope with materials that were transported by rented mules from Loutraki. Lots of effort and a lot of expenses. And the whole effort was framed by slander and accusations against the Elder.

This was coordinated warfare by the devil, who saw souls being won for God and the work of the founding of the Monastery progressing. Thus he used as his instruments the people of Loutraki who envied the work and chased after the Elder. The new Metropolitan, Prokopios Tzavaras from Tripoli, was also influenced by this tactic, who over time was enlightened by the Saint and promised to recognize the Monastery. In the summer of 1952 he approved the installation of the first sister, the probationary Irene Stergiou from the Holy Monastery of Phaneromeni of Kiliomodi in Corinth, and after a while the installation of the nun Styliani Goussopoulou as Abbess of the same Monastery. On September 19, 1953, the Royal Decree establishing the Monastery was issued, signed by King Paul II.

In 1977, Elder Nektarios founded the male Monastery of the Apostle Paul in Geraneia and after a while the male Monasteries of Saint Nicholas the New of Vouneni in Malagari of Perachora, Panagia Myrtidiotissa also in Perachora and Saint Nektarios in Gera.

Expanding also the social activity of the Monastery of the Saint after its filling up with a large sisterhood and the establishment and operation of tailor, embroidery and iconography workshops, he founded and built the nursing home of Saint Helen, which offers relief to needy women.

For his missionary activity, the municipality of Corinth awarded him the golden key of the city. In 2006, the Holy Synod of the Church of Greece with Archbishop Christodoulos awarded him a gold medal for his contribution to the Church. Despite his advanced age, he continues to tour all of Corinth, preaching the word of God and guiding his innumerable spiritual children, clergy, monks and laity. His important ministry as Chancellor for sixty years from October 3, 1951 was characterized by unwavering faith, unceasing prayer, loving divine services, all-encompassing charity, building activity, sacrifice for the least of the brethren. 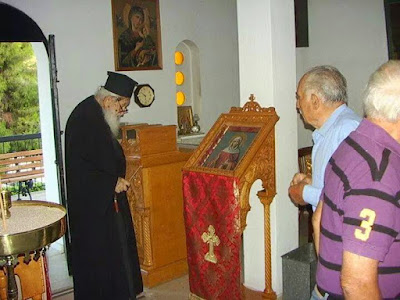 Below we are publishing one of the texts of Elder Nektarios to the sisters of his fraternity, as recorded by the blessed nun Sophronia:

Instructions to Nuns
In your daily life never forget the salvation of your soul. As long as you live in a convent, you have to conduct yourself in a God-pleasing manner with violence against yourself.

Joking is not an attribute of a monastic. "The one who spoke much repented, the one who was silent never," says Saint Ephraim. You are a happy being, free from all the temptations and storms of society. Do not think that you will find rest away from God and the harbor of the cenobium. Violence towards your passions is considered martyrdom before God. If you grieve and weep for the fall of your sister, you get a crown of martyrdom. If one part suffers, all sympathize and all nurture it with their love. If one sister falls, all hurt and love her. How do you watch and tremble if a divine pearl falls on you during Holy Communion, believing that it is a bodily member of the Lord? Likewise take care of your sister not to fall, because she too is a bodily member of the Lord. If you save a soul, you cover a multitude of sins. Humility like a lightning rod attracts the love of God.

The following nuns served as abbesses in the Monastery of Venerable Patapios:

Styliani (in the world Sophia) Goussopoulou from Constantinople in the years 1952-1963.