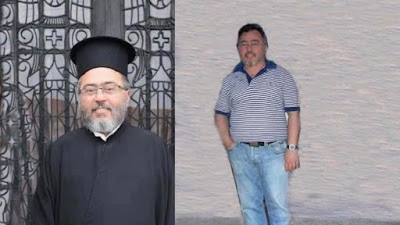 "A Saint on earth… Good Paradise, Father Gabriel" - With these words, friends and acquaintances bid farewell during the funeral of Hieromonk Father Gabriel, known before his ordination as Michalis Nikolaidis, who was stricken with the coronavirus at the age of 53. His death has spread untold sorrow to those who knew him. He died Friday afternoon on December 11th in the ICU of Kavala Hospital, where he had been hospitalized for days. His funeral took place on Saturday, December 12th.

Those who knew him speak of him as a "Saint on earth" and bid their farewell to him with the following words:

"Our Michalis died yesterday. He came, he taught ethics and love, and he left. Unfortunately, none of us were able to go to his funeral. Only nine people were allowed. Michalis had a physical issue. He was short, almost a dwarf. He fought, studied nursing and for years worked as a nurse in both hospital clinics and surgeries. He was constantly carrying a stool with him, to go up and reach the serums or give the tools to the surgeons when he was in the operating rooms. Michalis was the recipient of many jokes, but he never got angry. With no one.

He was always smiling, he did not frown at anyone, he did not stop saying 'have a good day' to anyone, he did not refuse help to anyone. About ten years ago, Michalis was transferred to the administration. He even took the position of superior. He was a member of Doctors of the World, he ran to the soup kitchens, he collected for the poor, he gave everything. And he had a dream to become a priest. And it was done. Two years ago. A priest without a salary. His salary was the one paid by the hospital.

He came to the hospital all week with his cassock. As soon as he arrived at the entrance, he took off his cassock and stayed with his shirt. Michalis became a monk and then a hieromonk. He was unmarried. And as a monk, at his tonsure, he was given the name Gabriel. On the weekends he left and went to his Metropolis, in Serres. There he had asked to be sent to work in remote and isolated villages that did not have a permanent priest. On mountains and in ravines. And last winter, I remember him constantly cold because there were villages where the car did not reach because of the snow and he went on foot until he arrived. After the liturgy, he lived in the villages.

He entered the houses of the inhabitants. Learned what problems they had. Forgotten people, they had found someone to care for them. It was not a few times that he brought them to the hospital, he arranged for our doctors to see them because some of them were neglected. And our Michalis always laughed. And he died. The only certainty of life, is death. I write it as a memorial. There are many Michalis', but this is the one I knew."