Saint Hilarion, Metropolitan of Kiev and All Russia (+ 1053)

Saint Hilarion, priest of the prince’s village of Berestovo near Kiev, was the spiritual father and companion of Prince Yaroslav. Saint Nestor the Chronicler relates:

“God-loving Prince Yaroslav loved Berestovo, and built the Church of the Holy Apostles there, and he honored many priests. Among them was the presbyter Hilarion, a man of virtue, knowledge, and given to fasting. He made his way from Berestovo to the Dniepr, where the old Kiev Caves Monastery is now, and he made his prayer in the deep forest there. Having dug out a shallow fourteen foot cave, he chanted the Hours and prayed in solitude to God.”

Saint Hilarion, as his written works attest, was not simply a “man of books”, but was endowed with great spiritual gifts and profound theological knowledge. He devoted all his efforts to the service of the Russian Church. When Metropolitan Theopemptus died, Rus was in a state of war against Byzantium. By decision of a Council of the Russian hierarchs, a resolution was made to establish a Metropolitanate at Kiev, not subject to Constantinople.

Hilarion's appointment met with stiff opposition from Luka Zhidiata, Bishop of Novgorod (1035-1060). Zhidyata openly opposed probably because it was the prerogative of the Patriarch of Constantinople to appoint the Kievan metropolitan and thus Hilarion's appointment was uncanonical. For his opposition, Luka was confined in the Kievan Caves Monastery for three years until his death, at which time his remains were taken back to Novgorod and buried in the Cathedral of Hagia Sophia there.

Saint Hilarion was famed among the Russian clergy for his heightened spiritual life and gift for preaching. Prior to this, he gave a eulogy in the “Tithe” Church of Kiev before the Holy Prince Vladimir with his acclaimed "Discourse Concerning Law and Grace", in which he provided a theological explanation of the place of the Russian Church in the history of the divine economy of salvation.

The choice of the Council hierarchs was dear to the heart of Yaroslav the Wise. Saint Hilarion was installed as Metropolitan at the Hagia Sophia Cathedral in the year 1051 and was later confirmed by the Patriarch of Constantinople. He was not the primate of the Russian Church for long. The chronicle does not mention the year of his death, but the Saint was not at the death of Prince Yaroslav the Wise (February 20, 1054), and in the year 1055 a new metropolitan had arrived at Kiev. Evidently, Saint Hilarion had died in 1053. 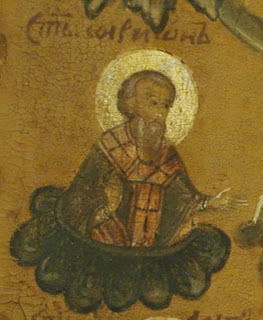 His spiritual legacy lives on in the Russian Church especially in a fine example of Russian ecclesiastical literature, the “Discourse Concerning Law and Grace.” Its content is profound and multi-faceted. At the heart of the “Discourse” is the teaching concerning salvation and grace. Secondly, great attention is devoted to the question of the superiority of Christianity over Judaism. This theme was essential during those times in Kievan Rus. The Jews had approached Saint Vladimir, hoping to convert him to their faith, and Saint Theodosius of the Kiev Caves (May 3) had gone to the Jewish Quarter in Kiev to preach Christ Crucified. It is also known that the Jews had attempted to convert the holy hierarch Nikita the Hermit to Judaism when he was still a monk of the Kiev Caves Monastery (1088). Saint Simon relates this in the "Kiev Caves Paterikon". This explains the attention which Saint Hilarion devotes to the question “about the Law given to Moses, and about grace and truth, through the coming of Jesus Christ.”

And finally, the third theme, the occasion of the uttering of the “Discourse” was the glorification of the apostolic work of Prince Vladimir. The kingdom of nature, the kingdom of grace and the future Kingdom of Glory are perceived in the spiritual experience of the Church as inseparably connected. The Law is only the forerunner and servant of grace and truth. Truth and grace are but servants of the future age and true life. Saint Hilarion teaches thus about the superiority of the Church: “Moses and the Prophets foretold the coming of Christ, whereas Christ and His Apostles bore witness to the Resurrection and the future age.”

The Saint explains that from the moment the Savior came into he world, the Old Covenant of man with God ceased to be in effect. With the theological symbols of the Old and New Covenants the Saint employs images borrowed from the Apostle Paul (Gal. 4:22-31) relating to the two wives of Abraham: the freeborn Sarah and the maidservant Hagar. “Hagar was cast out, a slave, together with her son Ishmael; and Isaac, the free son, was heir to Abraham. Thus also were the Jews cast out and dispersed through the lands, whereas the sons of grace, the Christians, have become heirs to God the Father. As the light of the moon fades at the shining of the sun, so also the Law fades at the shining forth of grace. The cold of night vanishes when the warmth of the sun heats the earth, and mankind is no longer bent over under the burden of the Law, but instead walks freely in grace.”

The joy of Christ fills the holy preacher when he speaks about the entry of his native Rus into the host of Christian peoples. “The grace of Christ has filled all the earth,” and especially, the youthfully alive peoples, to which the Russian people also belong. “It becomes grace and truth to shine forth in new peoples. They do not, in the words of the Lord, pour new wine (this being the teaching of grace) into old wineskins (referring to the Jews) but the rather put the new teaching, into new wineskins, into new peoples.” Thus the faith “throughout all the earth has spread and reached our Russian tongue. Here now we too glorify the Holy Trinity with all Christians, and let the Jews be silent. Pagans are accepted, but the Jews are spurned.”

Now the Orthodox Russians “are not termed idolaters, but rather Christians. No longer do we build heathen temples, but rather the churches of Christ. No longer do we sacrifice others to the demons (such as the Varangian Martyrs, July 12), but instead, Christ has been slain for us in sacrifice to God the Father. The blessed God has had mercy on all lands, and has not despised us, for He also desired to save us and bring us to our senses in truth.”

The great apostolic exploit of the enlightening of the Russian Land was made by Prince Vladimir (July 15), “like Saint Constantine,” who “commanded throughout all his land that they be baptized in the Name of the Father, and the Son, and the Holy Spirit. In a clear and loud voice, he ordered all in the cities to glorify the Holy Trinity and to be Christians, the small and great, slave and free, young and old, rich and poor.” Saint Hilarion speaks with pride about his native land, “Saint Vladimir did not exercise sovereignty in a bad or ignorant land, but the rather in Russia, which is known and heard of by all the ends of the earth.”

The “Discourse Concerning Law and Grace” was the first work of its time in the Russian Church in which the holy Baptizer of Rus is acclaimed blessed among the ranks of the Equal-to-the-Apostles. “Rejoice in the midst of sovereigns, O apostle, not in having dead bodies resurrected, but our deadened souls resurrecting: for by you have we been made alive in God and given to know life in Christ.” Such is the content of this remarkable memorial of ancient Russian theology. Among the other works of Saint Hilarion is his episcopal “Confession of Faith,” having become the model for a bishop’s vow in the Russian Church. Usually appended to the manuscripts of the “Discourse Concerning Law and Grace” is the “Prayer of Saint Hilarion.” This work of the Saint also possesses a long history within the tradition of his native church. In the year 1555, upon his journey to the newly-formed Kazan diocese, Saint Gurias ordered that there be read to him the prayer, “The Work of Metropolitan Hilarion the Russian”, at Moscow and in the other cities, through which he was to travel.

Saint Hilarion was buried in the Kiev Caves. In the inscribed titles to his works, in the manuscripts of saintly literature and lists of holy hierarchs, Saint Hilarion is invariably termed a Saint and described as a wonderworker. His assured literary veneration as a Saint is evidenced in the services to the Fathers of the Kiev Caves. Both in the service of the Synaxis of Fathers of the Near Caves (September 28), and also in the Service to All the Kiev Caves Saints (second Sunday of Great Lent), Saint Hilarion is numbered among the saintly hierarchs of the Russian Orthodox Church.
John at 3:45:00 PM
Share
‹
›
Home
View web version