Venerable Bessarion Sarai the Confessor
Saint Bessarion (Sarai) was a Serb who was born in Madian of Bosnia in 1714. At Baptism he was given the name Nicholas. Longing for the monastic life, he went on a pilgrimage to the Holy Land at eighteen, and was tonsured at the Monastery of Saint Savvas in the Holy Land in 1738 with the name Bessarion.
After traveling to Mount Athos on his way home, he entered the Monastery of Pakrou in Slavonia. There he served as a Deacon for seven years, then he was ordained a Priest. After another pilgrimage to the Holy Land he returned again to his homeland to bear witness for his Orthodox Christian faith.

About this time there was a great deal of unrest in the regions of the Banat and Transylvania because many Romanian Orthodox Christians had been forced into union with Rome. At Karlovits around 1742, Patriarch Arsenius had heard of Saint Bessarion’s holy and ascetical life and his reputation as a preacher, and asked to see him. He sent him to defend the Orthodox faith northwest of the Carpathian Mountains and to restore the Orthodox people from Uniatism.

Saint Bessarion left for the Banat in January of 1774, and was warmly received by the local people. Hundreds of people came to hear him preach, and many of them returned to the Orthodox Church. He encouraged his listeners not to abandon the faith which their fathers had passed down to them, but to remain firm and steadfast in it.

Preaching at Timishoara, Lipova-Arad, Deva, Orashtie, Salishtea of Sibiu, and other places, he would set up a wooden cross in the middle of each village, and people would gather to hear him. In each place, he was able to bring most of the people back into the fold of the Orthodox Church. This, of course, did not please the Roman Catholic authorities.

On April 26, 1744, Saint Bessarion was arrested by the Austrian army while on his way to Sibiu. They took him to Vienna, where he was placed on trial, and then thrown into the Kufstein prison on the orders of Empress Maria Theresa. There he endured much suffering because of his confession of the Orthodox Faith. After about a year in chains and tortures, he surrendered his soul to God.

Saint Bessarion the Confessor was glorified by the Holy Synod of the Romanian Orthodox Church on February 28, 1950, and the date of his annual commemoration was designated as October 21. According to some sources, Bessarion did not die in Kufstein prison, but was liberated and transferred to Vienna thanks to the Russian Foreign Ministry, who was then in Austria. The Saint was then sent to Russia where he ended his days. 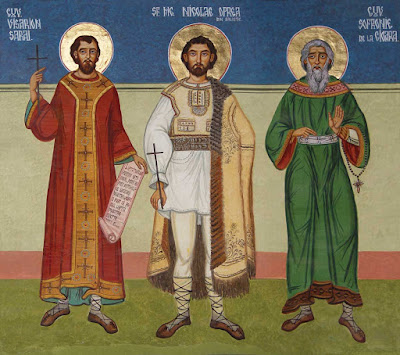 Saint Sophronius, Confessor of Ciorara
Saint Sophronius was originally from Ciorara-Sebesh in Alba county in Romania. From his childhood, he demonstrated a great love for Christ and the Church, so it was not surprising that he eventually received the monastic tonsure in Wallachia.

He returned to his village in 1756, and established a small hermitage called Cioara Skete in the forest. Several disciples came to join him there, drawn by reports of his holy life. Seeing the persecution of the Orthodox by the Catholic authorities at that time, as well as the Roman Catholic propaganda promoting Uniatism, Saint Sophronius traveled through many villages of Ardeal, encouraging people to remain firm in the Orthodox faith.

Saint Sophronius was so effective in his preaching that the Crai of Ardeal ordered him thrown into prison, where he was beaten. After his release from prison, his Skete was destroyed and was forced to flee those parts. He went to preach in the villages of the Apuseni Mountains, and once again he was incarcerated and tortured for Christ.

After being freed on February 14, 1761, Saint Sophronius assembled a great crowd of people in the city of Alba Iulia, and demanded equal rights under the law for Romanians. He also demanded of the Viennese an Orthodox bishop for Ardeal. That very year his demands were granted, and he retired to the Curtea de Argesh Monastery. In all Sophronius had been arrested nine times, He departed to the Lord not long afterward.

The Orthodox Church of Romania numbered Saint Sophronius among the saints in 1955, appointing October 21 as the date of his annual commemoration. 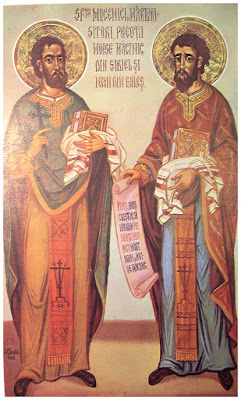 Holy Martyr Oprea of Salistie
Saint Oprea Nicholas was born in Salistie near Sibiu. He was married with children. Due to the persecution of the Roman Catholics against the Orthodox Christians, and the resulting exodus of the Orthodox to Wallachia, Oprea took up the cause of encouraging the Romanian people to remain steadfast in their Orthodoxy. Due to the oppression faced by orphans, Oprea took up their cause with the authorities.
In 1752, he went to Vienna to seek freedom of religion for the Orthodox of Arad. For this he was arrested and condemned to hard labor for the rest of his life in Kufstein. On 24 July 1784, Oprea's wife, Stana, petitioned the Emperor Joseph II for the release of her husband, who had by now been a prisoner for thirty-two years. The Austrian prison directorate replied that it had no record of a convict of his name, so it appears that the Holy Confessor had already ended his contest and received the crown of martyrdom from Christ. 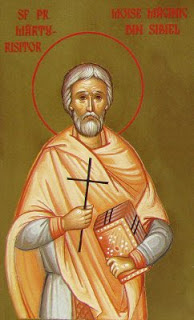 Holy Martyr Moses Macinic the Confessor
Saint Moses Macinic was ordained to the holy priesthood in Bucharest around 1746, and worked to oppose the Uniate policy of the Austrian government that aimed at imposing Roman Catholicism upon the Orthodox people of Transylvania. Because of his activities he was arrested and jailed in Sibiu for seventeen months. Ultimately, he was released with the understanding that he would cease to function as a Priest, and live as an ordinary peasant.

In 1752 he was chosen to go to Vienna with Saint Oprea Nicholas of Salistie to deliver a petition to Empress Maria Theresa. The petition asked her to recognize the rights of the Orthodox Church in Transylvania. She received them, but she had them thrown into the Kufstein Prison in the Tyrolean Mountains.

Although representatives from Transylvania repeatedly asked the Hapsburg rulers to free the two Saints, they denied all knowledge of them.

Saint Moses Macinic was glorified as a martyr by the Orthodox Church of Romania in 1992. 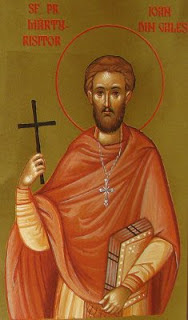 Holy Martyr John of Galesh
Saint John of Galesh was a Priest who was ordained by the Bishop at Bucharest, since there was no Bishop for Transylvania. He resisted the plans of the Hapsburg authorities to persuade Orthodox Christians to convert to Catholicism. One night the authorities burst into his home to arrest him, but Father John was not home. Instead the soldiers tied up his wife and tortured her. Neighbors heard her screams and they went to help, but one of them was shot by a pistol and killed.
In 1752, Father John and others among the faithful went to Banat, where they gave the Holy Confessors Moses Macinic and Oprea a list of all the misdeeds of the Uniates against the Orthodox west of Transylvania, in order to take it with them as a petition to the Court of Vienna. He then returned home and continued his struggles.
He was arrested in May of 1756 and thrown into prison at Sibiu, then Empress Maria Theresa ordered him confined in the prison of Deva Castle until he died. A year later he was sent to Graz in Austria. Some merchants from Brasov, on business in Graz, visited him in prison there in 1776. They found Father John as steadfast in his Orthodox faith as he was twenty years earlier. "I would rather die in prison," he told them, "than renounce my glorious faith!"
Later, he was brought to the notorious Kufstein Prison, where many Orthodox from Transylvania ended their lives.

In 1780, Gennady Vassie, a Serb who was incarcerated there, was able to send a letter to Empress Catherine II of Russia asking her to intervene on behalf of the Orthodox prisoners. In his letter he mentioned a Romanian priest named John, who had been kept there for twenty-four years because of his Orthodox faith.

Saint John of Galesh died in prison, and was glorified as a martyr by the Orthodox Church of Romania in 1992.
John at 5:25:00 PM
Share
‹
›
Home
View web version