The Wonderworking Icon of Saint Anna with the Theotokos from Smyrna 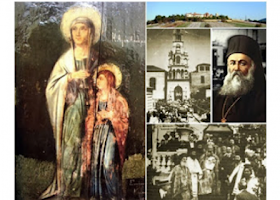 The icon of Saint Anna with the twelve-year-old Theotokos was originally located in Smyrna of Asia Minor. During the Asia Minor Catastrophe of 1922, the Turks set the city of Smyrna on fire to banish the Greeks who formed the majority population of the city, including the Cathedral of Saint Photini in the city square, in which was this icon of Saint Anna and the Theotokos. The icon was saved from the fire by a faithful Christian.
Saint Chrysostomos, Metropolitan of Smyrna at the time, who was ripped to pieces and slaughtered by the Turkish mob, would bring childless couples to this icon. He would have them fast for forty days, say prayers to Saint Anna, and at the end of the forty days to commune of the Divine Eucharist. When this was completed, the faithful couple could be sure that they would now be able to have a child. And when they did have a child, they would make a metallic offering to the icon. Because this icon was so wonderworking, it was full of vow offerings, even from childless Muslims who would come and pray before this icon and become partakers of the miraculous grace.
Today the icon is located in the Holy Monastery of the Ascension in Skourta of Boeotia. Many couples come to invoke the help of Saint Anna to have a child. Their names are written in a special diptych and are mentioned in the Holy Prothesis until they conceive a child. 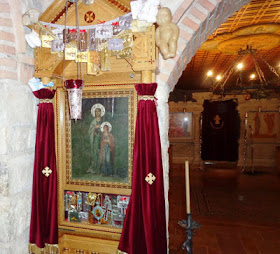 The Rescue of the Icon
As the city of Smyrna burned that fateful day in 1922, a woman named Jasmine had gone to Smyrna to get the children of her cousin so they could leave the city. They were among the last Greeks to leave the city. On the way, while everyone was looking to escape the hell of the ravaged city, as she passed the Cathedral of Saint Photini, she looked inside and saw all the icons burning. She had a Turkish official with her, named Ali.
Jasmine took out of her dress pocket whatever money she had on her and said to Ali: "Hey Ali, give this to the soldier to allow you to go through and go and grab an icon. God will burn us if we watch our heritage burn."
Ali did as he was told, and entered the burning church. He then emerged with an icon and gave it Jasmine. When Jasmine saw the icon, she was astonished to see that he was able to bring out the exact icon her mother had commissioned for the church as an offering to Saint Photini, out of gratitude to Saint Anna who granted her to have her first child. Since then this icon became known as a wonderworking icon that helped childless couples bear children.
Jasmine held tightly onto this icon as if it was the greatest treasure on earth, and she brought it on board a ship which took her to Chios, and from there after some years it came to the Holy Monastery of the Ascension in Skourta of Boeotia.
Read also: The Miraculous Icon of Saint Anna in Boeotia 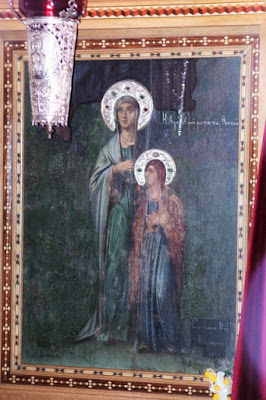