The Grandparents of Christ and Soteriology 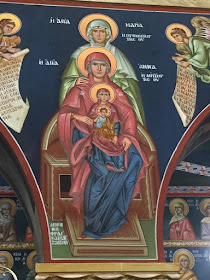 The soteriological plan for the salvation of humanity was realized in the birth of Mary, so honoring those who were selected to bring Mary forth is an idea that developed in Byzantium from the eighth century onward. In the eighth century, Kosmas Vestitor summarized the reasons for celebrating Mary's parents, "through whom the beginning of salvation for all has come about."
From the eighth to the eleventh century, Byzantium developed feast days to include the grandparents of Christ into the ecclesiastical calendar in order for the Church to form a more holistic view of salvation in its liturgical life. This is when we begin celebrating the Nativity of the Theotokos (Sept. 8), Saints Joachim and Anna (Sept. 9), the Entry of the Theotokos (Nov. 21), the Conception of Saint Anna (Dec. 9) and the Dormition of Saint Anna (July 25).
Why did the Church need a more holistic view of salvation in the eighth century? Because the heresy of Iconoclasm manifested a misunderstanding of the dogma of the Incarnation and specifically the human nature of Christ. Yes, Christ was born of a Virgin woman without a man and by the power of the Holy Spirit, but the Virgin was born to parents like all other parents, establishing the fact that Christ was fully human with an established human lineage.
For this reason, to celebrate the grandparents of Christ, Saints Joachim and Anna, is to celebrate the salvation granted to us by Christ in His full humanity. If Christ became fully a man in order for mankind as a whole to become gods by grace, then we owe it to honor not only the woman who gave birth to the God-man that brought about our salvation, but also her parents who were chosen to give birth to and raise the woman of whom all the prophets of the Old Testament foresaw and longed to see.