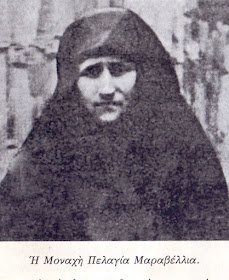 By Hieromonk Demetrios Kavvadias
Pelagia Marabellia, known as Stavroula in the world, was born in the village of Molaoi in Mani in 1860. She was the only girl among her six brothers. From a young age she had the desire to become a nun. She dressed modestly in plain clothes and would retire to distant chapels, where she quietly indulged in the divine work of prayer.
But her family, and especially her father, wanted to see her married to a local so that she would not live very far. His daughter, of course, reacted strongly against this. However, when the situation became impossible she fabricated a way to fulfill what she most desired. She agreed to be engaged to the groom they chose and the date of the wedding was set. She participated happily in the wedding preparations so as not to arouse anyone's suspicions. She gained strength from her prayers and unwavering faith in Christ and the thought that the chosen Bridegroom of her soul was worth every sacrifice.
So one Sunday after the Divine Liturgy the wedding took place and the wedding feast followed. Before midnight, the relatives accompanied the newlyweds with instruments to their house. It was then that the young woman's heart began to burst with anxiety about the implementation of her plan.
When they were alone, she comfortably and with a smile took off her wedding dress, saying to the groom: "Please hold it carefully until I return to the room. I do not want it to be crumpled."
She carefully went down the stairs and left the house quietly. When she was far enough away, she began to run like a deer being chased by a hunter. That night she found refuge in the Monastery of the Transfiguration of the Savior or "Neon Athonas" founded by the late Elder Panaretos (Polykarpos) Kavsokalyvitis.
She later narrated to her submissives: "I thought I was not even stepping on the ground! The otherworldly melodies that accompanied me gave me courage and inexpressible joy!"
The doorkeeper nun led her to the abbess to whom the maiden opened her heart. The abbess offered her shelter in the monastery, as well as the black garments of a nun. The next day her family together with the groom looked for her in the monastery. But the nuns who had been informed of the evening event drove them away from the sacred grounds. She remained like this in the monastery for a long time. In time, the abbess had her flee to Piraeus. From there she boarded a ship in order to visit the Monastery of Kechrovouni in Tinos accompanied by Sotirios Tsafos. She sent a message to her husband that he is free to do whatever he wants and not to feel bound by her.
At the age of eighteen she entered Kechrovouni and after the regular testing period she was tonsured a nun and named Pelagia, in honor of Saint Pelagia who had previously lived in the monastery. It even happened that the day of her tonsure was the day on which her husband arrived at the monastery in a rage. His answer came harshly from the abbess: "There is no Stavroula here. This is where the great-schema nun Pelagia lives and you can go and look after your own life."
Regarding this event, Eldress Pelagia herself later said: "As long as he was a free man, I did a prayer rope for him every day so that God would enlighten him to go to a monastery, become a monk and receive the double crown of Virginity and Asceticism." Years had passed, over twenty. One summer morning, a young man asked to see Eldress Pelagia. When they met, he knelt at her feet and said to her: "I am the son of your ex-husband and my father sent me to get your blessing, because I want to become a monk. After here I leave directly for Mount Athos. My father has been there for a long time."
The late Abbess of Kechrovouni Eupraxia Vasilikos testified about this soul as follows: "Sister Pelagia was a great ascetic. She would rarely sleep in bed. Her sleep time was always measured. She rested on a chair or on her stool, closing her eyes for a while. She loved prayer, isolation and silence. Only for serious reasons did she go out or even open her cell. During the fasts she ate a little dry bread day after day and only late at night."
She worked hard and her craft was embroidery on the crate, which she taught along with precision in the monastic state to her four submissives - Kassiani, Pelagia, Theodouli, Kallistrati, as well as to destitute girls who lived in the monastery at that time.
When the calendar reform was implemented according to the New Calendar in the monastery, Sister Pelagia refused to comply with the order of the Diocese for reasons of conscience and was thus forced to leave her beloved Kechrovouni. In Athens she was found destitute. When her brother, police officer George Maravellias, asked her to meet her, she replied: "Since I put on the schema, I have no brothers."
She settled with her submissives in Korydallos, where they built the Holy Hermitage of Saint Marina. She reposed in the Lord at the age of 85, in the year 1945 and was buried in the Cemetery of the Greatest Archangels of Korydallos.
Source: From the book Elders and Female Monasticism. Translated by John Sanidopoulos.