The Hidden Cross of Pontus, a True Story 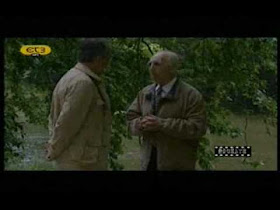 Harry Efraimides, a Professor at Metsovio Polytechnic of the National Technical University of Athens, went to Trebizond in Pontus of Asia Minor to teach a seminar, which he was invited to, and at the same time he wanted to fulfill the request of his aunt. His aunt had lived in Trebizond before the population exchange of 1922, and during the catastrophe her infant son was taken by the Turks and never heard from again (most likely he was raised to be a Turkish soldier, it was thought). Harry's aged aunt, who was living in Athens, now wanted Harry to visit her old house in Trebizond and retrieve for her the baptismal Cross that belonged to her son Kostis, to remember him. Now when Harry arrived at his aunt's house, what he found greatly surprised him.
When the Greeks were forced to leave their homeland, many of those who were particularly wealthy, were not allowed to take anything with them, or if they did it would have been taken by the Turks. For this reason, they either buried their wealth and precious belongings somewhere on or near their property, or hid it in very difficult to find places, with the hopes of one day returning and regaining their wealth and belongings. As the years passed, however, their wealth and belongings remained hidden as they settled in their new land. The Cross Harry's aunt wanted him to retrieve was in a box hidden in a corner of the fireplace in her house, and in this box was a bunch of gold as well.
When Harry arrived in Trebizond he went in search of the house as was directed to him, and he found it with little difficulty. He then knocked on the door, a Turkish woman answered, and with difficulty he communicated to her in broken English why he was there. She told him that she could not let him in, because her husband was at work, so she told him to return in the evening. He returned in the evening, and the husband, a tall Turkish man, answered the door. Harry explained to him that his aunt had once lived in this house and she hid a box with gold and a Cross that was very valuable to her that she wanted him to bring back to her. The Turkish man told him to return tomorrow evening and he will see what he can do. The next evening Harry returned, knocked on the door, the Turkish man answered, who was alone in the house, and he handed the box over to Harry and told him to take it.
Harry was very moved as he opened the box to see what was inside. Inside he found a bunch of jewellery and gold coins, but the Cross was missing. Confused, Harry asked the Turkish man why the Cross was missing. The Turk then went into his chest pocket and showed him the Cross. Indeed, on the back of the Cross it said in Greek: "Konstantinos, 1921". Harry then asked him why he kept the Cross in his pocket. The Turkish man replied to Harry that he can take the box with all the gold, but he wanted to keep the Cross. "Why?" Harry asked, "Are you a Crypto-Christian?" The Turk replied: "Not exactly, but I am Kostis." Absolutely shocked and overjoyed, Harry and Kostis hugged and kissed each other, and Harry handed over the box back to him, saying: "Keep the Cross, and keep the box, because they belong to you and your children."
When Harry was trying to figure out what to do next with this story, Kostis told him: "No, no, it has no meaning. My two children are higher officers in the Turkish army."

In the video below, Harry tells the story of how he discovered not only the Cross but Kostis as well.