The Crypt of Saint Marina in Miggiano 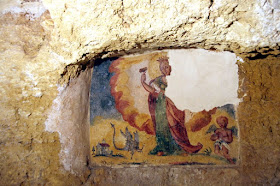 The Crypt of Santa Marina is situated under the 14th century homonymous chapel near the cemetery of Miggiano, accessible via a staircase placed to the right of the chapel, and it is one of the gems of Salento’s rock-cut architecture.
This is a Basilian crypt dating to the 10th or 11th centuries and consists of three rooms. The first part still preserves the fresco depicting Santa Marina on the front wall. The space on the right side, once occupied by the apse, has been used as an ossuary and still preserves the ruins of a pedestal and a column. The smaller chamber accommodates a cycle of frescoes and Greek inscriptions. Each environment presents the typical steps which act as seats and in the apse are the remains of an altar and a column.
Of particular importance are the Byzantine frescoes depicting St. Nicholas, St. Katherine of Alexandria, the Archangel Gabriel, Saint Marina and Holy Anonymous, executed over a period of time between the 11th and 14th centuries.
Saint Marina is depicted holding a hammer with an angel on one side and a dragon in front of a depiction of the chapel on the other.
Particular importance is given by the representation of the Dormition of the Virgin, where the Virgin's body lies surrounded by the Apostles. Above the figure of Christ holds the soul of His Mother, rendered symbolically with a small figure wrapped in white bands. Around her two bishops and a figure with a halo attend the scene. 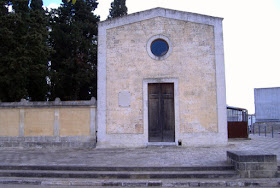 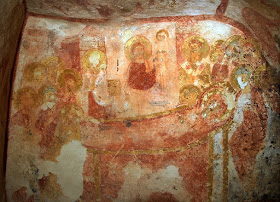 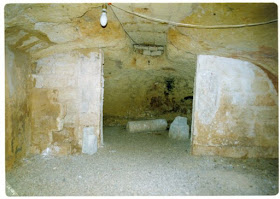