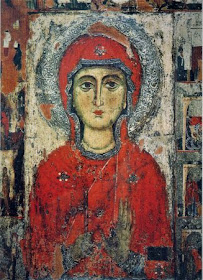 By Paraskevas Lambropoulos
Now I will tell you about a certain miracle a woman told me.
This miracle happened to a twelve-year-old girl. It should be noted that the girl, when she was twelve years old, was quite physically developed.
So one day she went with her father to another village, to help a family friend with the harvest. There they met someone who, as soon as he saw the daughter, said to her father:
"Hey, Haralambos, it's time you start looking for a husband! Your daughter grew up."
From that moment the girl got sick. She was dizzy, nauseous and could not stand on her feet. They returned home, but her health gradually deteriorated, until she was confined to bed.
Her voice was lost and her end drew near.
Six months passed and at the end the neighbors who visited her waited for her to die, as she neither ate nor drank for days. All she did was listen to them silently.
Suddenly the door opened and a woman came in and sat next to her.
It was then that the girl moved her arms and legs for the first time.
The people in the house did not see the woman and thought that the little one was dying.
"Do not be afraid, you will be fine. I'm Marina, the woman told her."
She made the sign of the cross over her, stroked it on the head and continued:
"I have a pair of shoes under your bed. With what they have inside, pass your whole body through, from one end to the other."
The girl opened her eyes, did what the Saint told her and after two or three days she began to gather herself, eat and talk.
People did not understand how this happened and they told the priest. He, after hearing what happened, advised them to go to the Church of Saint Marina, which was located in the nearby village Perdikoneri and to anoint her body with the oil that the two oil lamps above the Beautiful Gate have.
Indeed, they put her on the donkey and left.
When they arrived at the church, her parents had another little girl smear her with the oil of the Saint all over her body. As soon as it was over, the daughter got up and left walking!
The lady who told me this miracle, still lives and is married in Vytina, Arcadia.
May we have the blessing of Saint Marina and invoke her Grace for the healing of the soul and the body!
Source: From the book Εμπειρίες μου κοντά στον Άγιο Πορφύριο ("My Experiences Near Saint Porphyrios"), 2015. Translated by John Sanidopoulos.