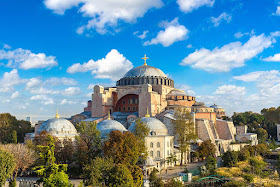 By Nikos Chiladakis
The important revelation that after the occupation of Constantinople on November 13, 1918 by the Allied troops of the Entente, the British intended to return Hagia Sophia to the Christians of the city but at the last moment they took a step back, was made by the Turkish newspaper Zaman on 6/30/2013. One realizes that if such a thing happened and if the cross would have again dominated majestically atop the dome of Hagia Sophia, this would be an event of great historical, symbolic and psychological significance and would decisively affect the final return of the city into Greek hands. The reappearance of the cross on the dome of Hagia Sophia would be one of the biggest historical blows for the Turks and would trigger the evacuation of the city from the Islamic element, as the Allied troops estimated at the time, according to the Turkish newspaper.
And while everything was ready and the plans for the re-conversion of Hagia Sophia into a Christian church had already been made, there was a reaction from the Muslim troops of the British Empire and some threats were made that if this happened the Muslims in India would revolt against the British, as well as in other areas where the British Empire dominated Muslim populations.
According to Zaman, the first thoughts of the then British Prime Minister, Lloyd George, after the occupation of Constantinople by the Entente troops in November 1918, was the immediate surrender of Hagia Sophia to Christians. With this move, as the British Prime Minister estimated, there would be a great tendency of the Muslims to flee to Asia Minor as it would seem that the city would finally pass back into the hands of the Christians and return to its original name, that is, from Istanbul to Constantinople. As for the Muslim caliphate that until then had its headquarters in Istanbul, they would be transferred to Bursa (Prousa) or Konya (Iconium) and thus a large part of the Muslim clerics would leave the city. On the other hand, according to British sources at the time, there were already hundreds of mosques in Istanbul, so changing the status of Hagia Sophia and converting it to a Christian church would not affect the religious duties of the Muslims who would remain in the city. There was disagreement over to whom Hagia Sophia would be given. Of course, the first priority was given to the Greeks of the city, as reported by British sources, since Hagia Sophia was the symbol of Greek Orthodoxy for a thousand years and now the Greek Orthodox Patriarchate was claiming it with serious claims. However, there had been claims from the Russian side since 1915 by the Russian Trubetskoy and relevant references by the well-known Russian writer Dostoevsky.
But none of this happened because of the second thoughts of London, that is, the center of the then great British Empire that at that time ruled most of the Islamic world and even had in its possession the great holy cities of the Muslims, that is, Mecca and Medina. The issue was left without any progress thus allowing for the Asia Minor catastrophe and the occupation of the city by the troops of Mustafa Kemal Ataturk on October 6, 1924. Hence a unique opportunity was lost for Christianity but also for Hellenism that would return after four and a half centuries in this historic temple. Nevertheless, Hagia Sophia was not left as a mosque, as Kemal, according to the Turkish newspaper, accepted some new British plans to turn it into a museum. The rationale was for this historic temple to become, as it did, a world attraction that each year gives the Turkish economy millions in exchange for visitors coming from all over to admire this masterpiece of Greek Orthodoxy.
Source: Translated by John Sanidopoulos. 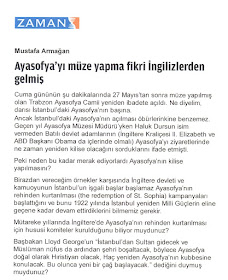