Saint Euphrosyne, in the world Eudokia, Grand Duchess of Moscow (+ 1407)

The Holy Grand Duchess Eudokia was born in 1353. She was the daughter of the Suzdal prince Demetrius Constantovich (+ 1383) and his wife the princess Anna. From infancy, brought up in the spirit of Christian piety, Eudokia was distinguished by a quiet, meek disposition.
In 1367, at the age of thirteen, she became the wife of the Moscow Great Prince Demetrius of the Don, who was fifteen. Their happy union was for Russia a pledge of unity and peace between Moscow and Suzdal. The affairs of Christian charity the princess and her husband combined with the exploits of fasting and prayer. Together they had eight sons and four daughters (one son died in infancy and two sons died as young children). 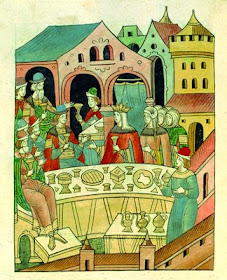 Saint Alexis, Metropolitan of Moscow, and even Saint Sergius of Radonezh, who baptized their eldest son Basil, had a great influence upon the spiritual life of Princess Eudokia. Saint Demetrius of Priluki (Feb. 11) was the godfather of another son.
Almost in the very year of the marriage of Prince Demetrius and Eudokia, a pestilence raged in Moscow, people died in the thousands, and weeping and lamentations of orphaned children were heard on Moscow's streets. Another disaster joined in - a terrible fire in Moscow. A sea of ​​fire swept through the streets of the city, mercilessly devouring wooden buildings, houses, property, cattle burned, people perished. 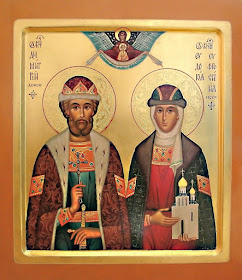 The groan and cry of the people reached the prince's tower, leaving their mark on the heart of the young princess - and then Eudokia showed herself to be the mother and patroness of destitute victims of fire, widows and orphans.
As soon as Moscow recovered from the ashes, in 1368 the Lithuanian prince Algerd besieged the Kremlin, in which the great prince and princess were shut down, together with Metropolitan Alexy and the boyars. And Moscow burned again, again groans and screams of Moscow residents, beaten by the Lithuanians, were heard. All of Moscow was devastated. 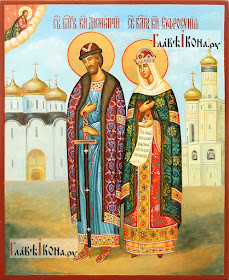 The young princess constantly prayed for her native land, and with all her might tried to alleviate the situation of the afflicted.
The building of churches and the foundation of the monasteries by the efforts of the Princess Eudokia contributed to the flourishing of Russian temple construction in the fourteenth century, which began with the construction of the church in honor of the Holy Trinity. In 1387 she founded the Ascension Convent in the Moscow Kremlin. 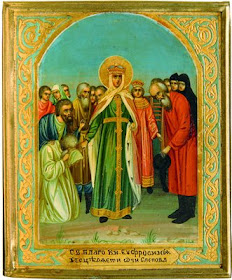 Gradually, the life of Princess Eudokia became a feat of self-denial and self-surrender entirely to the will of God. In 1383, the Great Prince of Moscow was to appear before the Tatar Khan Tokhtamysh. But due to Tokhtamysh’s extreme bitterness, they decided to send to the Horde his eldest son Basil, who at that time was about thirteen years old. Saint Eudokia released her son and thereby condemned herself to two years of suffering: Prince Basil was detained in the Horde as a hostage. Tokhtamysh, in addition to tribute, demanded a ransom for Basil - eight thousand rubles. The amount at that time was huge, and the ruined Moscow principality could not pay the full amount. Therefore, Basil had to live in captivity with the khan for two long years, after which he managed to escape. In 1389, Prince Demetrius, not reaching forty years old, dangerously fell ill and departed to the Lord. His son Basil succeeded him, though he and his brothers were to remain obedient to their mother according to the last will of Prince Demetrius (he advised his sons: "listen to your mother in everything"). 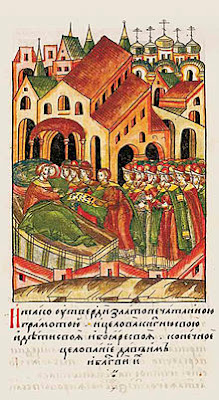 The widowed princess continued to build churches and monasteries, and dedicated her life to the upbringing of her children until they were married or tonsured. Meanwhile she began to lead a secret ascetic life. By the magnificent clothes in which the holy princess appeared before people, it was impossible to guess that she was exhausting herself with fasting, vigils and heavy chains underneath her clothes. 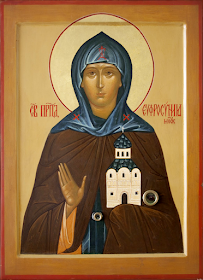 Human malice and slander did not pass over her. Ridiculous rumors began to circulate around Moscow, affecting the honor of the widowed princess. These rumors reached the ears of her sons. The princes, although they loved their mother and did not believe in the slander, still could not help but be embarrassed. One of them, Yuri, turned to his mother with a question about the matter. Then the princess gathered all her sons and took off part of the grand-ducal robes - the children saw that the ascetic was so emaciated from fasting and labors that her body was dried up and blackened and "the flesh adhered to the bones." Yuri and the other brothers asked for forgiveness from their mother and wanted to avenge the slander. But their mother forbade them to think about revenge. She said that she would gladly endure humiliation and human slander for the sake of Christ, but when she saw the embarrassment of the children, she decided to reveal her secret ascetic labors to them. 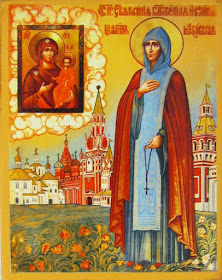 After the blessed death of her husband, the Holy Princess refrained from directly participating in state affairs, but nevertheless it was precisely according to her advice that in 1395, during Tamerlane’s invasion into the southern regions of Russia, the Vladimir Icon of the Mother of God was transferred to Moscow. On August 26, 1395, Grand Duchess Eudokia, with her sons, the Metropolitan, the clergy, and the boyars, met the icon of the Mother of God on the Kuchkovo field with many gathered residents of Moscow. On that very day and hour, Tamerlane saw in his sleep a vision of the Radiant Woman, surrounded by radiance and many lightning-fast warriors, menacingly rushing forward. On the advice of his mentors, Tamerlane ordered the troops to turn from the borders of Russia. 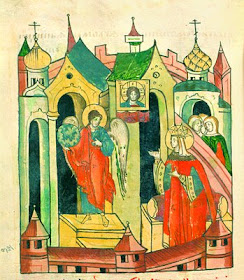 In 1407, after seeing a vision of the Archangel Michael, foreshadowing her imminent demise, Princess Eudokia decided to leave the princely tower and accept monasticism, for which she had been striving all her life. At her direction, the image of the Archangel was painted and placed in the Kremlin church in honor of the Nativity of the Theotokos. During the transition to the Ascension Convent, Princess Eudokia healed a blind man who received his sight, wiping his eyes with the edge of her clothes, and thirty other people were healed of various ailments during this procession. In the monastery, the princess took tonsure with the name of Euphrosyne on 17 May 1407. 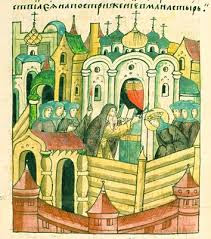 On July 7, 1407, she peacefully reposed. Her body was buried in the Ascension Convent founded by her.
The sanctity of the Nun Euphrosyne is confirmed by the wonderful signs of God's mercy that have been performed at her tomb for several centuries. Many times a candle lit by itself at the tomb of Saint Euphrosyne has been seen. And in the nineteenth century, several miraculous healings took place there. In 1869, having attached himself to the tomb with the relics of the Saint, a possessed youth was healed. In 1870, the Nun Euphrosyne appeared in a dream to a paralyzed girl and restored her health. A terminally ill man was brought back to life through the laying on him of a veil from the tomb of Saint Euphrosyne.
On July 7, 1907, the 500th anniversary of the death of Saint Euphrosyne was celebrated in the Kremlin. 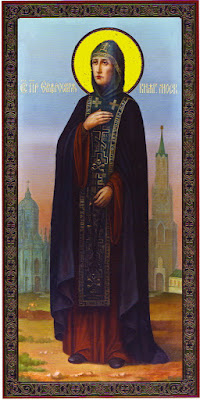 In 1929, by decision of the Soviet government, the destruction of the buildings of the Ascension Convent began. Museum staff tried to save the tomb of the Saint. The basement of the Archangel Cathedral was chosen for its placement. The white stone tomb of the Nun Euphrosyne turned out to be damaged, and they could not take it out entirely from the earth. The relics of the Saint were saved from destruction, but it was hardly possible to isolate them, because they were located along with other remains from burials in two white-stone tombs of the fifteenth century. The remains of the stone tomb of the Saint remained in the same basement. 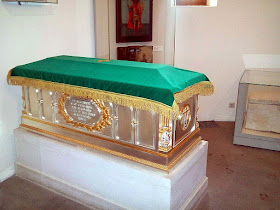 On May 28, 2008, after the liturgy in the Cathedral of the Archangel performed by Patriarch Alexy II, her relics were transferred from the Court of Justice (basement of the Cathedral of the Archangel) to the chapel of the martyr Uara, where they can be venerated till this day.
Her spiritual feats testify to the fact that neither wealth nor high social status, nor family bond can be an insurmountable obstacle to acquiring the grace of God and holiness. 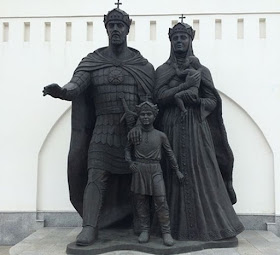 An old Russian church poem has survived, the lament of the princess for her husband, who had died at the age of thirty-nine.
In 2015, the Synod of the Russian Orthodox Church established a new church feast day - Memorial Day of Prince Demetrius of the Don and Princess Eudokia, falling on May 19th.