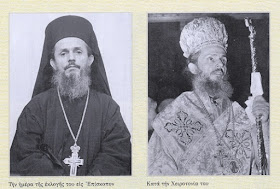 Beloved brethren and beloved children in the Lord,
Recently the Synod of the Ecumenical Patriarchate, during its Session on the 23rd of June 2020, decided to include the Metropolitan of Edessa, Pella, and Almopia Kallinikos into the list of Saints of the Church. In the Press Release of the Sacred Synod of the Patriarchate it says: "It was decided, on the basis of a report of the Canonical Commission, for the late Metropolitan of Edessa, Pella, and Almopia Kallinikos to be canonized, and his memory in the future is to be celebrated on the 8th of August."
The Permanent Sacred Synod of the Church of Greece, during its Session on the 26th of June 2020, expressed its joy for this event and in the Press Release of that day the following was written among other things:
"The Permanent Sacred Synod, with spiritual joy and gladness received the message regarding the Canonization of the late Metropolitan of Edessa Kallinikos by the Holy and Sacred Synod of the Ecumenical Patriarchate at the proposal of the Church of Greece, which today announces this important event offically to its faithful members and especially the pious Christians of the Sacred Metropolis of Edessa, Pella, and Almopia, which this Holy bishop of the Church of Christ pastored in a God-loving, God-pleasing, Holy-spiritual and Missionary manner. And to the pious faithful of the Sacred Metropolis of Aitolia and Akarnania, where his birthplace is located and where he served as a Lay Theologian, Preacher and Secretary, and continued on there as a Deacon, Archimandrite and Chancellor, until his nomination as the Metropolitan of Edessa in 1967. It would not be an exaggeration to say that this virtuous Hierarch proved to be a real jewel of the Hierarchy of the Church of Greece ...."
Our Holy Father Kallinikos, Metropolitan of Edessa, Pella, and Almopia, was born in 1919 at Sitaralona of ​​Thermo in Aitolo-Akarnania and was from Platanos in Nafpaktos. He was Chancellor of the Sacred Metropolis of Aitolia and Akarnania and then Metropolitan of Edessa, Pella and Almopia from 1967 to 1984, where he reposed in the Lord, after a venerable life and after a venerable death.
He was my spiritual father, who ordained me Deacon and Presbyter, and I lived with him for fifteen years in the Metropolis Chancery, then I served him for seven months in Hospitals of London and Athens, until the last moments of his earthly life, when his holy soul departed for heaven.
It is commonly said that "no one is greater than his chamberlain", but this not only does not apply to Saint Kallinikos, rather the opposite applies. That is, the closer one approached him, the more one saw his greatness and his holiness. This holy Bishop had great spiritual gifts, he had inner depth, and most of all he combined intelligence with intense spiritual life.
Immediately after his repose, which took place in August 1984, various texts were written about him, in which he was given various descriptions. I will mention some of them: "A Byzantine hagiography and magnificence of the Holy Fathers", "adorned with the ethos of the Holy Fathers", "a graceful Hierarch", "a chosen servant of God and holy Bishop", "a good shepherd", "a charismatic leader", "a multi-talented cleric", "a sensitive High Priest", "a patient and sweet Metropolitan", "reverent and zealous", "a jewel of the Church", and others.
In 1988, the Abbot of the Sacred Monastery of the Venerable Gregoriou on the Holy Mountain, Fr. George (Kapsanis), in a letter wrote:
"In his heart he was a hesychast and at the same time a tireless shepherd and a missionary. A combination hard to find. How can we forget the gentleness, the meekness, the philanthropist, the amiability, the solemness, the seriousness, the simpleness of his holy personality?
We thank the Lord because we were found worthy to know him as well as to receive his blessing at the beginning of our settlement on the Holy Mountain. His homilies in our Sacred Monastery remain indelibly in our hearts."
Indeed, Saint Kallinikos was a hesychast at heart, a tireless shepherd of his rational flock and a missionary, which is a hard-to-find combination.
I am writing the above to you in order that you may rejoice spiritually, because a Bishop has been placed in the Church's Calendar, and from now on we will celebrate his memory on the day of his repose, that is on the 8th of August.
May we have his intercessions.
With warm blessings.
The Metropolitan
+ of Nafpaktos and Agiou Vlasiou HIEROTHEOS
Source: Translated by John Sanidopoulos.