In their youth, the Holy Princes Basil and Constantine Vsevolodovich lost their father, Vsevolod, who fell in battle with the Tatars (Mongols). Saint Basil, the elder brother, succeeded to the throne. As prince, he had to face a multitude of concerns, tasks and sorrows. The city and the villages were devastated from the invasion of the Tatars, many households remained without shelter and food, and he had to concern himself about everything and about everyone. Besides this, it was necessary to gain the good will of the Tatar Batu Khan, and the holy prince more than once journeyed for this reason to the Horde. On his return from the last trip to the khan, he married Princess Xenia. They had two children - a daughter Maria and a son Basil, who died a minor.
All his tribulations the holy prince suffered without complaint, and he ruled the princedom like a true Christian. He did not enter into disputes with other princes, he concerned himself with the unfortunate among his subjects, and he restored and updated many temples destroyed in the Yaroslavl territory by the Mongol-Tatars.
In the winter of 1249, Prince Basil went to Vladimir to meet Grand Duke Alexander Nevsky († 1263). There he fell seriously ill and on February 8 he reposed in the Lord. The coffin with the body of Prince Basil was escorted from Vladimir to Yaroslavl by his cousins: the Rostov and Belozersky princes Boris and Gleb together with their mother, as well as the Grand Duke Alexander Nevsky. The burial was made by Bishop Kirill of Rostov in the Yaroslavl Dormition Cathedral, on the north side of which was laid a coffin with the body of Prince Basil of Yaroslavl. 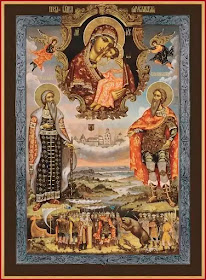 After him the holy Prince Constantine succeeded to the throne. He strove to imitate his brother, but to his great dismay, everywhere he saw pillage and murdering done by the Tatars. On July 3, 1257 the Tatars fell upon Yaroslavl itself. Prince Constantine fearlessly opposed the superior forces of the enemy with a small army. Crossing the other side of the Kotorosli River, he went up the mountain, where a bloody battle with the Tatars took place. Despite heroic resistance, the Russians were defeated numerically by a superior opponent. Prince Constantine heroically fell with his warriors. Yaroslavl was cruelly ruined. The mountain where the Yaroslavl prince died with the army, since then began to be called Tugova, as a place of sorrow (tuga = sorrow, longing, grief). The body of the noble sufferer was buried with honor in the Dormition Cathedral, at the resting place of his older brother Basil.
In 1501, a fire occurred in Yaroslavl, during which the Kremlin and the wooden cathedral burned down. When they began to dig ditches for laying the foundation of the new temple, they found two coffins with imperishable bodies. According to the inscriptions on the stone slabs, it was determined that these were the princes Basil and Constantine. At the request of the people, the Bishop of Yaroslavl in the presence of numerous clergy transferred the imperishable relics from the Kremlin to a wooden church in the name of the holy martyrs Boris and Gleb. The news of this event reached the Grand Duke of Moscow, John III, who sent skilled masons from Moscow to build a cathedral church. Subsequently, he himself arrived in Yaroslavl to venerate the holy relics of his ancestors. 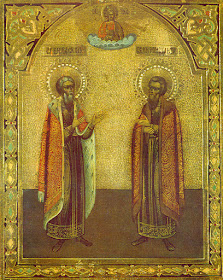 After the construction of the Dormition Cathedral was completed, the holy relics of princes Basil and Constantine were again solemnly transferred and placed openly between the pillars, on the right side, under the ancient family princely icons. In 1744, during a great fire in the cathedral, the holy relics were burned, after which their remains were enclosed in arks and again placed in the Dormition Church, but in a specially constructed tomb. In the reign of Basil Ivanovich (1526-1533), the monk Pachomius wrote the life of the Yaroslavl wonderworkers. The memory of the holy noble princes Basil and Constantine takes place twice a year: July 3/16 - on the day of the battle on Mount Tugovoi, June 8/21 - when their holy relics were acquired. On the same day, the memory of the Yaroslavl Icon of the Mother of God is celebrated, according to legend, brought to Yaroslavl by the noble prince-brothers and since then located in the Dormition Cathedral.