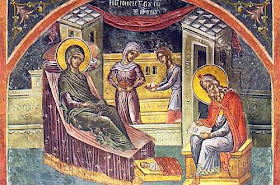 Three wondrous things accompanied the birth of St. John the Forerunner and Baptist.
The first wondrous thing is that St. John the Forerunner is the only Saint of the Church that the world came to know first as a Saint and then as a baby, first as a Prophet and then as a man. When he was still six months in the womb of his mother Elizabeth, the Grace of God manifested within him when he prophetically and joyously leaped as he heard the greeting of Mary, who had just conceived the Lord by the power of the Holy Spirit. This leaping was an act of veneration towards the Mother of God and worship towards the God-man, which also filled Elizabeth with the Holy Spirit and moved her to prophetically say to Mary: "Blessed are you among women, and blessed is the fruit of your womb! But why is this granted to me, that the mother of my Lord should come to me? For indeed, as soon as the voice of your greeting sounded in my ears, the babe leaped in my womb for joy. Blessed is she who believed, for there will be a fulfillment of those things which were told her from the Lord.” The prophetic grace was transferred from John to Elizabeth in order for him to express through her with words that Mary was blessed for believing the Lord and that the fruit of her faith and obedience was that she was now the mother of the Lord. The grace St. John received from the womb was unique and says a lot about him before he was even born.
The second wondrous thing is that the birth of St. John parallels the birth of Jesus and they shared similar privileges to show the people that he was the Lord's forerunner:
- When it was announced by the Archangel Gabriel that Jesus Christ was to be born he greeted Mary with "Rejoice." When it was announced by the Archangel Gabriel that John was to be born he foretold to Zechariah that "you will have joy and gladness, and many will rejoice at his birth."
- The Angel told the Virgin: "He will be great, and will be called the Son of the Highest." The Angel foretold to Zechariah: "For he will be great in the sight of the Lord."
- The Angel told Mary: "You shall call his name Jesus." The Angel told Zechariah: "You shall call his name John."
- At the birth of Christ we have a virgin give birth. At the birth of John we have an old sterile woman give birth.
- The birth of Jesus was glorified by the Angels. The birth of John left the people in awe.
- The birth of Jesus was indicated by a bright star. At the birth of John the muted tongue of his father was loosed and full of the Holy Spirit he prophesied concerning his son.
- When Jesus was born the authority of the devil ceased. When John was born the message of the coming salvation began.
Thirdly and very significantly, Zechariah did not pray to be granted a son. We know this because even when the Archangel Gabriel announced to him that Elizabeth his wife was to conceive a son, he did not believe that such a thing could be done. Then why did the Archangel Gabriel say to him: "Do not be afraid, Zechariah, for your prayer is heard; and your wife Elizabeth will bear you a son, and you shall call his name John?" This is because Zechariah was offering incense in the Temple and praying for the salvation of Israel, so when the Archangel told him that his "prayer was heard," it was in reference to the fact that John would play a significant role in the coming salvation of Israel, first through preaching and second through the peoples repentance and baptism by his hands. Therefore, we have here the announcement that with the birth of John salvation has come. He was a forerunner that prepared the way of salvation for the Lord, which was to be fulfilled through Jesus Christ.
These are among the reasons why Jesus would later say of John: "I tell you, among those born of women there is no one greater than John." It is also the reason why his birth is only one of the three celebrated by the Church (together with that of the Lord on December 25th and the Mother of God on September 8th), and his icon is always to the left of the Lord on the icon screen before the holy sanctuary.