Saints Niketas of Thebes and Those With Him 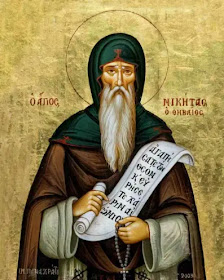 On the 23rd of this month, we commemorate the Venerable Niketas of Thebes, as well as the synaxis of those Venerables that are referred to in his biography, Theodore the revered priest, Daniel of the Castle in Patras, and Gregory of Mystras.
Verses
A victorious victor was the Theban Niketas,
Receiving the incorruptible crown of the Venerables,
The four Venerables with the four-fold virtues,
Were garbed with garments of Eden.
Today, Niketas, you were stripped of the seven skins.
Venerable Niketas lived around the early eleventh century and was from the Boeotian city of Thebes. His pious parents, Andrew and Theodora, dedicated him to the Lord from the womb, and gave Niketas over at the age of five to a teacher in order to receive an education. From his early youth he was noted for his prudence, wisdom, virtue and God-pleasing life.
At the age of sixteen he and his brother entered the Monastery of Theokletos, where he was tonsured a monk. Having lived in the monastery in asceticism and prayer, Niketas longed for the solitary life in order to devote his life to God without distractions. An Angel of the Lord appeared to the abbot of the monastery, instructing him to not hinder Niketas in this endeavor. That morning the abbot gave Niketas his blessing, so he departed the monastery with his brother for a quiet and solitary place. They found such a place in Ostia, where they would undertake their ascetic struggles in the spiritual arena.
In Ostia the two brothers lived in strict asceticism to attain all the virtues, through vigils, prayers, prostrations, sleeping on the ground, fasting, labor and enduring every hardship. The fame of their virtuous struggle soon increased, bringing many of the faithful from the surrounding region to seek out their blessing and spiritual counsel. The Bishop of that area also elevated Niketas to the priesthood. Many disciples began to gather around him as well. The monks built a church to serve their liturgical needs in a cave which they dedicated to the Savior Christ.
Saint Niketas acquired the gift of discernment and wonderworking. Wild animals would become tame before him. He never worried about food or drink, trusting in the Providence of God. To dispel pride, whenever someone brought him food or wine, he would eat and drink with them, though when he was alone he barely ate or drank anything at all. During Great Lent he ate and drank nothing from Monday through Friday, and only ate dry and raw foods on Saturday and Sunday.
In his life we are also informed of the Saint's encounters with the Venerable Theodore the Priest, who beheld the Saint surrounded by the uncreated light; the Venerable Daniel of the Castle in Patras, whom the Saint encountered in Patras and was noted for his hospitality which was compared to the Patriarch Abraham as well as his great asceticism and devotion to prayer; and the Venerable Gregory of Mystras, with whom the Saint conversed and who lived in asceticism in Evia. Venerable Niketas reposed in 1079. 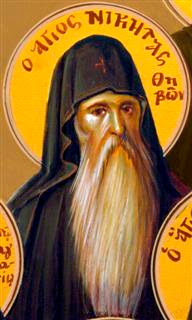 Apolytikion in the First Tone
From childhood you followed the Lord, Venerable one, through prayers, vigils, and all forms of asceticism, earnestly keeping His commandments, for which you received the divine schema, and was seen by Theodore, bathed in sensible light. Glory to Christ Who glorified you, glory to Him Who made you wondrous, glory to Him Who has shown Niketas of Thebes, to be a divine intercessor.
Kontakion in Plagal of the Fourth Tone
Seven-gated Thebes has as a wall, the unconquerable intercessions of the Saints, to Christ the King of Zion above, Niketas who shined forth in asceticism, as well as Theodore, Daniel and Gregory, to whom we cry: Rejoice, God-bearers.
Megalynarion
Rejoice four Christ-bearers, Holy Fathers, Niketas and Daniel, with Theodore, and Gregory, illuminating Thebes, with uncreated divine grace. 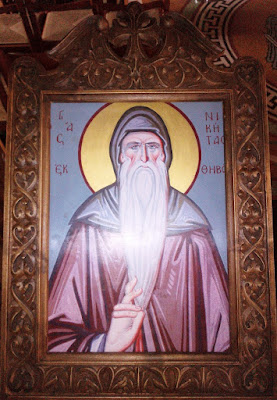 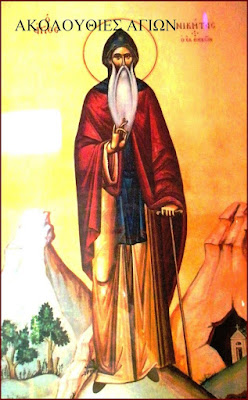 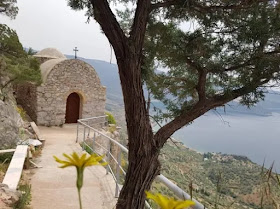 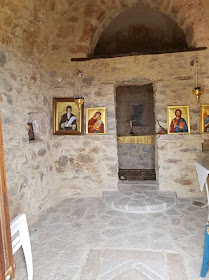 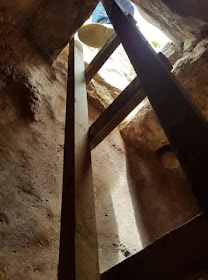 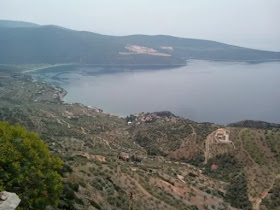