The Holy Spring of the Twelve Apostles in Constantinople 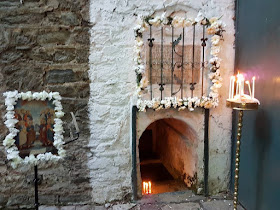 The Holy Spring of the Twelve Apostles in Constantinople is one of hundreds of holy springs in the Queen City, though it is one of the few that can be found outside of a church, on private property, that still functions.
In Constantinople, almost every church has a holy spring which is dedicated to another saint from the one commemorated in the main church and celebrates its own feast separately. The most significant holy springs in the City are in Panagia Blachernae, Panagia Vefa and Saint Demetrios in Xerokrini. The most famous of these holy springs is Zoodochos Pege in Balukli. Besides these, which are well known, there are hundreds of others that can be found even in homes, stores and private spaces. These sacred springs in the City were unique to the Orthodox Church, with none belonging to the Armenians. An exception is Sulu Manastır (Water Monastery), which is an Armenian church with a holy spring, however this shrine is built over the historic Monastery of Panagia Peribleptos from the 11th century, which was forcibly removed from the Romans of the City and given to the Armenians by the Ottomans.
These holy springs were places to pray and drink sanctified water as a blessing. This was done not only by the Romans, but also by the Armenians, Turks and Jews, with many coming from far away places to become partakers of divine grace. It was always assumed that the owners of these springs would make them accessible to the people, if not every day then at least on certain days and during certain hours.
The Holy Spring of the Twelve Apostles is one of these private holy springs. Every year the Patriarch of Constantinople goes to this holy spring on the feast of the Synaxis of the Holy Twelve Apostles, which is June 30th. This holy spring in located in the Bebek neighborhood, a small and poor community in the most cosmopolitan part of the west coast of the Bosphorus. The holy spring is built on the ground floor of an old impressive mansion known as the "Konak of Kokkolis".
The stone ground floor of the building must be of Byzantine origin. The upper wooden floors, three in total, are wooden and their construction dates from the 18th to early 19th century. However, the marble inscription above the entrance of the holy spring says that the area was renovated in 1742 by someone named Stavrakis. The holy spring is very small and you have to bend down to get a drink of the holy water that comes little by little from the spring and fills the trough. In Nikos Atzemoglou's valuable book on holy springs, it says that this is the only entrance. The holy spring extends to a cave below of 15 meters, which, however, is no longer accessible.
Today, this impressive building has been sold to a wealthy Turkish American, who intends to repair it, after obtaining the relevant permits for a house that has been declared a protected monument. The Ecumenical Patriarchate was interested in buying the property when it was sold, but the price was too high. The large mansion is surrounded by a very large garden. Today there is only a small part left at the entrance, which, however, gives the feeling and the image of the greatness and the time when this old Roman mansion was in bloom. 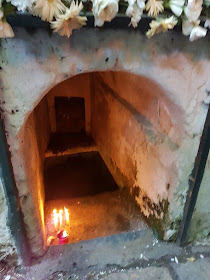 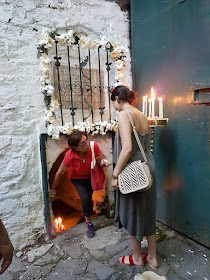 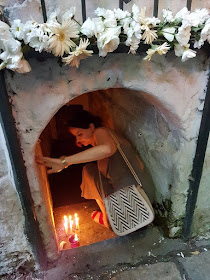 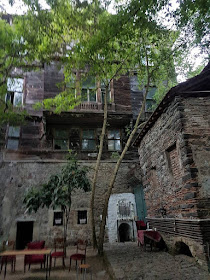 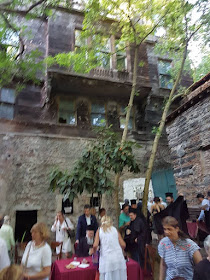 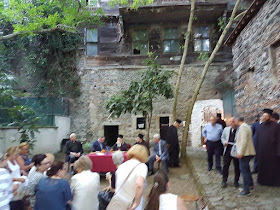 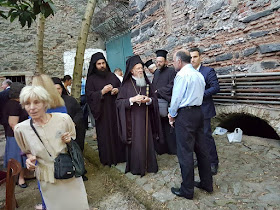 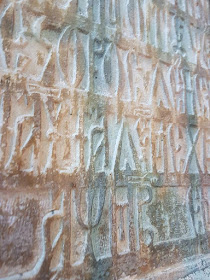